Goldwarden’s Gambit shines as win condition for Phyrexia: All Will Be One Commander precon

Affinity for Equipment is a new one.

Phyrexia: All Will Be One Commander is bringing support to R/W Equipment, an archetype that has grown over the past few years due to MTG sets like Kamigawa: Neon Dynasty and Kaldheim.

ONE Commanders R/W precon Rebellion Rising is led by Nayali, Suns Vanguard who supports a go-wide creature token deck that uses Equipment. One of the big-mana finishers found in the list is Goldwardens Gambit, a seven-mana spell that has Affinity for Equipment to reduce the cost.

Like most aggressive archetypes, R/W Equipment is dangerous in the early turns but can struggle later. Wizards of the Coast has helped mitigate this issue by providing Red with more ways to recover from board wipe spells and generate value in later turns. Goldwardens Gambits versatility should make it a key card in any Equipment-focused list. 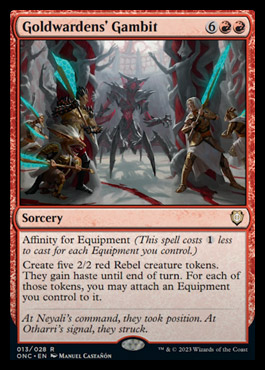 Dedicated Equipment decks in Commander are usually able to knock off at least one player. The issue arises in the later turns when opponents start casting sweepers and building their own value engines. Red decks in Commander struggle to close out a game and rebuild their battlefield in the face of consistent removal from three other players.

Goldwardens Gambit is a great option for Equipment decks looking for a way to either take the lead or break the symmetry. Its a surprising way to immediately build a powerful board and potentially swing in for lethal against an opponent. Creating five 2/2 tokens is solid. In a deck that revolves around creature tokens, its likely youll have other Enchantments or creatures that give them buffs.

The ability to freely attach Equipment to the tokens further powers up these attacking creatures. A seven-mana spell in Commander should threaten to win the game. Goldwardens Gambit does have game-winning capabilities while also being decent from behind, a place where Red decks end up often in the format.

You can catch opponents off guard when ONE Commander is released on Feb. 10.