There are few things worse in a game of Commander than spending several turns building up a strong battlefield and the opponent casts a board wipe.

Magic: The Gathering’s Dominaria United will help alleviate the damage done by a board wipe with a one-mana Artifact from the Legends’ Legacy reconstructed deck revealed by Star City Games.

Gerrard’s Hourglass Pendant is an excellent utility artifact that can provide any deck with a source of extra turn and board wipe hate. This will help stifle an opponent’s win condition and help you bounce back after a wrath. 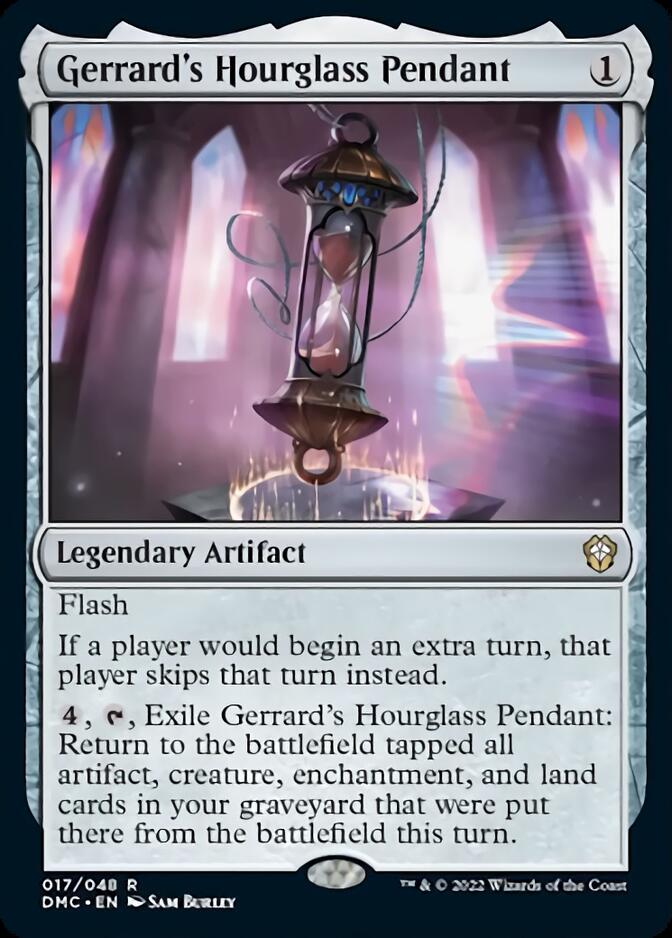 The first ability won’t always be relevant at every table. Most decks don’t run extra turn spells. In the rare event you run into one, Gerrard’s Hourglass Pendant will be one of the only pieces of hate against those spells in the pod. It’s a nice ability to have in the back of your pocket.

Gerrard’s Hourglass Pendant earns its spot in the 99 with the second ability. For a total five-mana investment, this card can return your permanents to the battlefield after a board wipe. This will help you recover when an opponent plays a wrath, which is essential in the creature-heavy Legends’ Legacy precon. The Artifact can sit on the battlefield waiting to be activated or be a surprise with flash.

This card can bring back lands in the event of mass land destruction and helps reverse the damage from a card like Vandalblast destroying all Artifacts. Gerrard’s Hourglass Pendant being a colorless card makes it a great option for any deck. Most cards with a similar effect have a color requirement limiting the decks it can go into.