On entertainment value alone, this was one of the best Worlds series of all time.

In the best series of the year hands-down, LCK champions Gen.G survived a career day from Canyon, ShowMaker, and the rest of DWG KIA as they avoided a reverse sweep in the quarterfinals of the 2022 League of Legends World Championship.

With Graves, one of the tournament’s meta-defining picks during Canyon’s Worlds 2020 title run, receiving buffs in the Worlds patch, DWG KIA quickly became a popular dark horse pick as more carry-style junglers crept back into the competitive forefront.

Every single best-of series that these two teams played in 2022 have gone the distance. All four regular season best-of-threes were 2-1 victories for Gen.G, and their Spring Split playoff series was also a 3-2 victory for them. And the icing on top of the five-game cake was the fact that neither team’s players shied away from the most reliable way to prove that their individual skill is a factor to be reckoned with: winning on an unconventional pick.

DWG KIA jungler Canyon set the tone early for a wildly entertaining set of drafts when he locked in Kayn and pushed the record-breaking number of champions played at this World Championship to 108 individual characters either picked or banned. And while the meta has absolutely been diverse this tournament, if anyone thought that Canyon would bust out Kayn in game one of this series, they are liars and you should feel free to label them as such.

Ryze was Chovy’s answer to Canyon’s draft curveballan answer with a full stop. One of the game’s best mechanical players was like an apparition on the Rift, Realm Warping at light speed all over the map, torpedo-ing the pace of Gen.G’s game one victory. 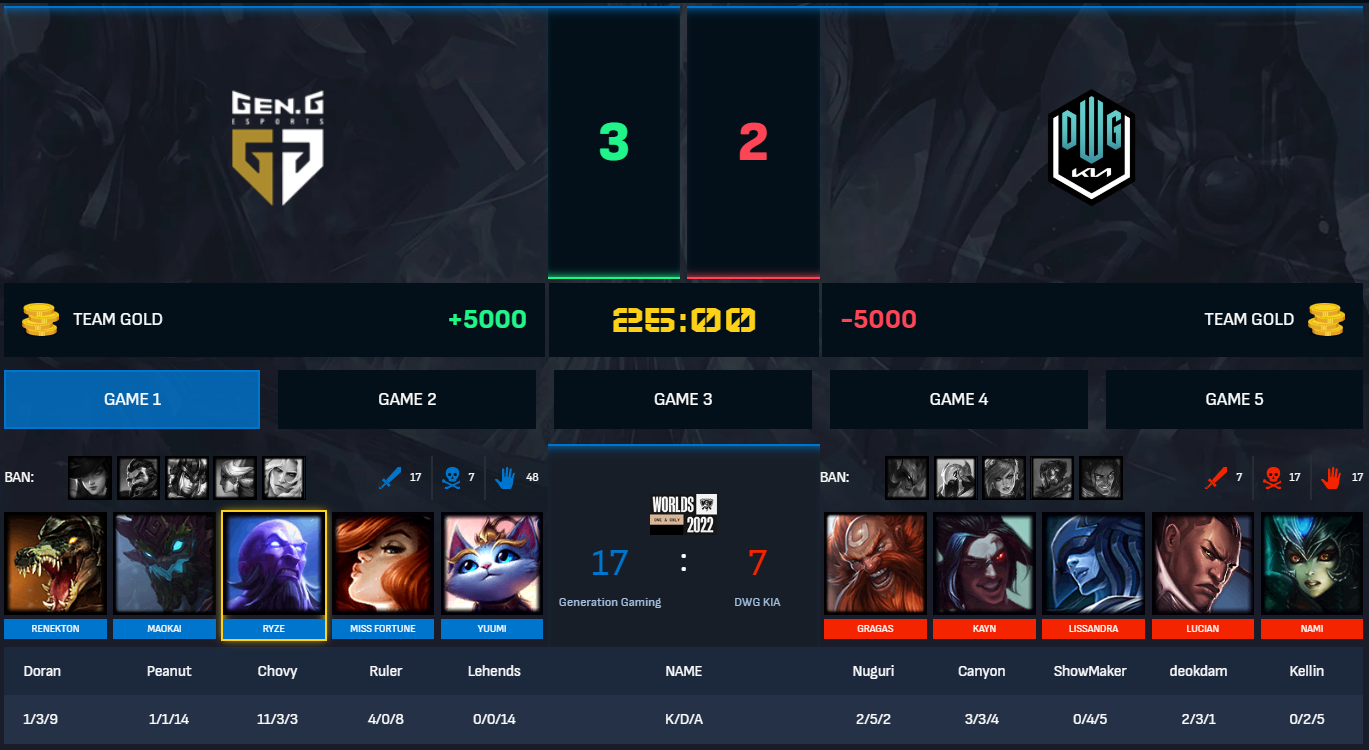 Game two told a similar story despite a heroic DWG KIA comeback attempt that left many fans of the 2020 World Champions wondering what could have been, as their team now stared down an 0-2 deficit. Only one reverse sweep had ever happened in Worlds history before. Two Guardian Angels negated a highlight-reel Emperor’s Divide from ShowMaker’s Azir to try and wrest the game from Gen.G’s control one final time as the obstinate boys in blue tried everything they could to overcome support Lehends’s Yuumi.

14865 Healing to allys over the game pic.twitter.com/oTviJOKCvf

It was the last time Yuumi and her 100 percent Main Event winrate would see the Rift in the series, and the last time Gen.G would sniff anything close to a comfortable game that night.

The series was on the way to being one of the closest 3-0’s in recent memory. But in game three, DWG KIA’s “almosts” turned into “oh wow yep there they are’s.” ShowMaker continued his incredible series with a Swain game on a champion that, again, had fallen out of favor in the highest levels of the professional meta. Nevermove after Nevermove locked Gen.G in place, allowing for a slurry of easy kills to flow into the pockets of deokdam’s Aphelios. DWG KIA hadn’t been able to keep Gen.G from creating other advantages in the face of the ones that Canyon was creating in previous games, but in this one, it was a suffocating performance on Viego for the jungler.

Pairing him with more damage that scaled better into the late-game was another part of the winning recipe, and they ran it back in game four to similar tremendous early game success. With less conventional teamfighting, and more high-risk picks in Renekton for Nuguri, LeBlanc for ShowMaker, and Renata Glasc for Kellin, DWG KIA were on a clock to step on Gen.G’s throat and not allow them space to breathe. They did just that thanks to another monstrous Viego performance from Canyon. By the 21-minute mark, all three Drakes, a Baron, and almost a 10,000-gold lead all belonged to DWG KIA.

Gen.G banned Canyon’s Kayn in games two and four, so naturally, with the champion open, the wind of the New York crowd in their sails, and a supernatural amount of momentum, he locked it in for game five. ShowMaker, in another comfort pick move, picked Syndra. On top of all that, deokdam was able to grab Aphelios yet again. Peanut got his jungle thoroughly ransacked early, but was able to counter Canyon’s counter-jungling with ice-cold mental, and willed Gen.G to a massive early lead. But with another dose of the synergy they displayed in game three, ShowMaker and Canyon gave viewers flashbacks to 2020 with a three-man CC chain to swing the game back in their favor in the blink of an eye.

Even though the duo won Worlds in 2020, this play is one that will go down in the annals of League despite DWG KIA’s loss. On the precipice of history, with their two most important players playing to levels that hadn’t been seen in years on the biggest stage, Gen.G, like in all their victories in this series, played better as a team. They bent, but never broke. Not in games one, two, and five, anyway.

This sole intra-region quarterfinal highlighted two of the region’s best young mid lane talents, but Chovy had a stark lack of international accolades compared to ShowMaker coming into this year’s World Championship. In fact, of the five former members of 2019’s iteration of Griffinmaybe the biggest “what-if” in the history of professional Leagueonly AD carry Viper has found definitively greener pastures, winning Worlds last year with EDward Gaming. Doran, Chovy, and Lehends reunited this year on the LCK’s “superteam” to try and make that proverbial question a footnote rather than the specter hanging over the heads of the team’s ex-players.

One huge step was taken towards that goal for Chovy, as he won his first Worlds quarterfinal in his fourth try.

DWG KIA’s Worlds run is over, but Gen.G will face the winner of tomorrow’s quarterfinal between DRX and reigning world champions EDward Gaming next Sunday in Atlanta at 4pm CT.