The all-important first seed finish is on the line in this matchup.

Oct. 18, the last day of the Worlds 2021 group stage, features a Group D round-robin that will decide which teams take the final two spots in the knockout stage. Since Group D was the only group that featured no 3-0 or 0-3 teams through the first round of games, it contains the most questions that need to be answered. Any of the four teams present could earn a top-two finish.

Gen.G and LNG Esports share first place in the group with 2-1 records. This rematch will be crucial in determining which team has the best shot at securing a top seed and avoiding the powerhouse squads in the first round of knockouts.

Gen.G and LNG first played each other on day one of groups. Since then, however, theyve had more and more information at their disposal to help devise their game plans.

Their first meeting was a one-sided affair. LNGs first three picks were Lee Sin, Aphelios, and Gwen. Gen.G went all-in on lane dominance with Renekton and Miss Fortune. On R4, Gen.G took Leona, forcing LNG to blind pick mid. They rounded out their composition with Rakan and Sylas. Gen.Gs final pick was a phenomenal one: Zoe for Bdd.

LNGs composition was purely about mid- and late-game teamfighting. Aphelios and Gwen were both picked into losing lane matchups with the hope that they would scale into power after surviving lane. LNG chose to then double down on the skirmish strategy with the Sylas last pick. With Gen.Gs picks, they essentially had three winning lanes that would all have pressure advantages. Even if their teamfight was weaker on paper, Gen.G had the tools to choke LNG out of the game.

Domination on all fronts

The flaw in LNGs draft became apparent at around 4 and a half minutes in. Rascal used his priority as Renekton to force Gwen under the tower. Bdd then used his lane advantage to Teleport top for first blood, with Gwen losing a full minion wave as a result. The early-game dominance didnt end there: Gen.G also took first dragon around the six-minute mark.

Bdds Zoe became a focal point of this match. Not only is Zoe able to outpush and bully Sylas through the lane phase, Sylas gains nothing against her at level six since her ultimate does nothing when stolen. Bdds dominance resulted in two solo kills against Icon in just a minute and a half.

After just 18 minutes, Gen.G had dragon soul point without having to fight for a single one. LNGs composition never truly had a chance to come online. At 22 minutes, the teams lined up at the dragon pit. The only teamfight of the game ended in a Soul for Gen.G and a clean five for zero. Rascal and Bdd then Teleported into LNGs base and ended the game.

Since this match, LNG have greatly adjusted their drafts. In their games against MAD Lions and Team Liquid, LNG picked a powerful mid laner within the first rotation who could get priority easily. Icons KDA on LeBlanc and Syndra in the group stage is 13-0-9. LNG took the first dragon in both of those games as well.

It would also seem that LNG have dropped the Gwen pick. They are instead letting Ale counter-pick his lane with stronger dueling champions who can transition into split push. His Camille and Fiora games have netted him a 7-3-19 KDA, though he’s only played them once each in the group stage.

With LNG committing to more lane priority, their games have been some of the quickest at Worlds. They have the fastest average game time of any team in the Worlds main event so far, at 26.4 minutesa whole two minutes faster than T1s, according to Oracles Elixir.

This playstyle seems to fit them much better. Tarzan is one of the best junglers at Worlds and giving him lanes with pressure to work with is a surefire strategy for success. As the favorites, LNG have higher odds for first blood (1.776 to 2.032) than they have for winning the match (1.890 to 1.918), which is quite rare.

As for Gen.G, theyve tried to keep a similar style of draft throughout their games. Their one loss came at the hands of MAD in their second game of the group stage. This match was a grueling 47-minute affair that featured Gen.G drafting for top side priority with Xin Zhao and Graves. In doing so, they made the mistake of letting Yuumi, Lucian, and LeBlanc though.

MAD snatched up all three of these high-priority picks. Gen.G attempted to negate the disadvantage in the bot lane with a rare Kalista pick. This immediately backfired as Ruler was taken down for first blood. Without a cohesive draft plan, Gen.G couldnt amass a proper early-game lead like they wanted. The game stalled out with a total of seven dragons and three Barons being taken between the teams. Gen.Gs inability to close the game out early combined with their lack of a scaling bot lane resulted in an impossible scenario to win.

Gen.Gs next game against Liquid remedied that issue immediately. They put the highest priority on Miss Fortune to ensure a winning bot lane. Gen.G also picked up an early Camille while banning the two most aggressive junglers in the tournament, Xin Zhao and Lee Sin. Liquid was forced into a full scaling composition with Ziggs, Irelia, and Jax. Although the game did stretch into the later phase, Gen.G had massive leads in objectives which allowed them to secure the victory. 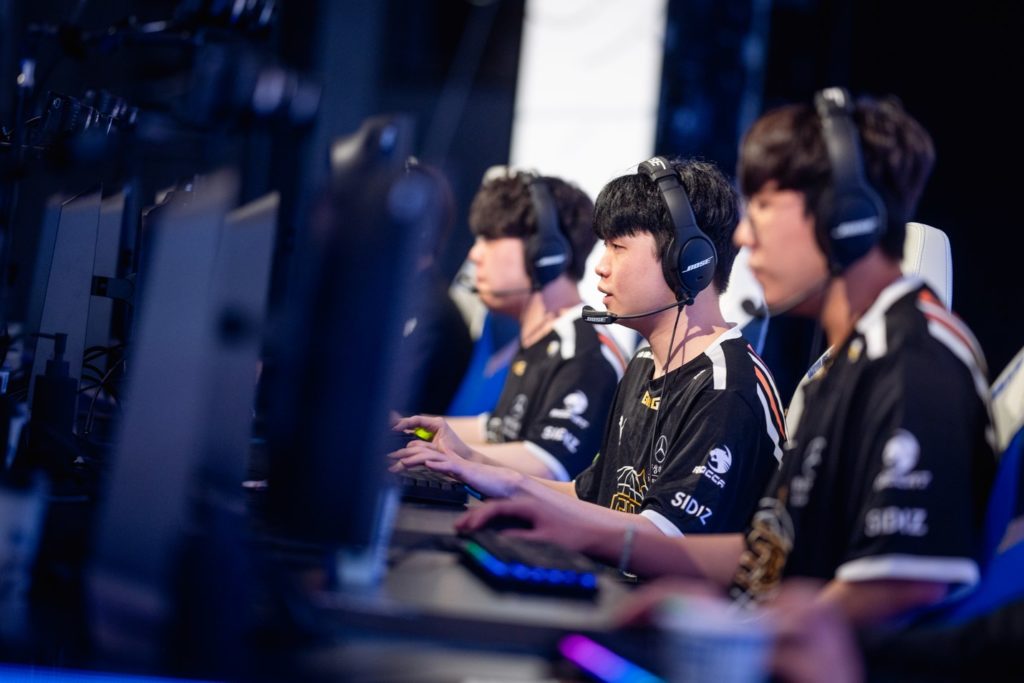 With the meta being heavily carved out by this point, both teams have priority on many of the same champions. Gen.G will be the blue side team for this matchup. This means that theyll have much more ban freedom than LNG, who need to take the best picks off the table. Gen.G could look to gimp Tarzans playmaking power and ensure that they have bot pressure for early dragons. Meanwhile, LNG will have the option of taking a very strong solo lane combo in the first rotation.

The rematch between Gen.G and LNG will take place on Oct. 18 at 8am CT.

Are you curious to learn more about DJ Esports and how it works? Weve got it all covered in our educational piece.