The PGL Antwerp CS:GO Major, the first Valve-sponsored event of the year, broke its own viewership record yesterday during the third day of the Legends Stage. One match in particular, Imperial vs. Cloud9, was decisive for setting new milestones.

Back-to-back Major winners in 2016 Gabriel “FalleN” Toledo, Fernando “fer” Alvarenga, and Lincoln “fnx” Lau did the unthinkable and upset C9 in a best-of-three series to remain alive in the PGL Major. Over 570,000 people saw Imperial win the first map on Gaules’ stream, and his stream peaked at 707,648 fans while Imperial were crushing C9 on Mirage, the third and final map.

While Gaules set a new record for Portuguese-language streams of all time, he also helped the PGL Antwerp Major set a new viewership milestone. The first Major of 2022 peaked at 1,061,109 people, and the Portuguese broadcasts peaked at 734,000. Generally, the English broadcasts are far more popular, but they only peaked at 414,391 yesterday, according to EsportsCharts. 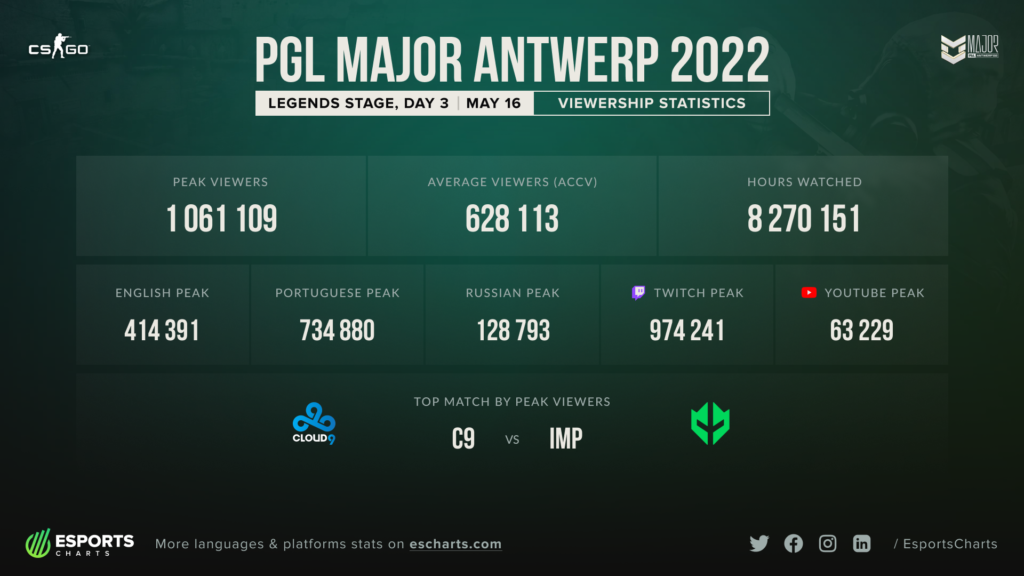 A lot of Brazilian fans have been eager to follow FalleN, fer, and fnx’s reunion under the Imperial banner since the project was made official in January. The “Brazilian Last Dance” will have to beat Copenhagen Flames today in the Legends Stage to advance to the playoffs. Other than Imperial, Brazil will also have FURIA face G2 for a spot in the Champions Stage.

The previous Major, PGL Stockholm in 2021, smashed all viewership records in CS:GO history when the grand finals peaked at over 2.7 million people. So far, PGL Antwerp Major seems to be on the right path to breaking the all-time record.

Latest comments
No comments yet
Why not be the first to comment?
Featured news
Counter-Strikean hour ago

Juanflatroo calls out ECSTATIC for allegedly cheating in CS:GO matches