Steal your opponent's spells and enjoy it.

Author of demonic lore within Dungeons & Dragons, Iggwilv has become a Magic: The Gathering planeswalker within the upcoming Commander Legends: Battle for Baldur’s Gate set.

Tasha, the Witch Queen is the third Commander Legends: Battle for Baldur’s Gate (CLB) planeswalker to get revealed so far. Known as the Dream Witch and Witch Queen, Tasha is a demonologist that slots perfectly into the MTG colors Blue and Black. The witch first appeared in the AFR set via a Sorcery spell called Tasha’s Hideous Laughter. Tasha has now transformed into a planeswalker, stepping up her exile game.

Synergizing with Thief of Sanity in the MTG colors Dimir, Tasha, the Witch Queen elevates exiling opponents’ spells to a whole new level. Each time you cast a spell that you don’t own, Tasha has a static ability that produces a 3/3 Black demon creature token. 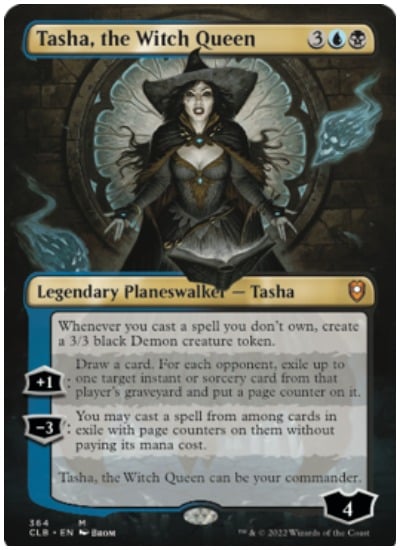 Able to function as a Commander in the Dimir colors, Tasha, the Witch Queen is an interesting build around planeswalker. Dimir decks are good at controlling and stealing opponents’ cards, so there is a home for the witch within the Commander format.

It’s unlikely, though, that Tasha will function as a good commander within CLB Draft unless there is a good amount of support for her that has yet to get spoiled. Tasha may not have enough support to become a commander but whether in Draft or Constructed, the witch will slot into a number of existing MTG Commander decks.

Players can test out Tasha, the Witch Queen with the release of Battle for Baldur’s Gate on June 10.