This article is sponsored by DJ Esports.

Hanwha Life Esports and Fnatic square off tomorrow as part of the 2021 League of Legends World Championship. The two have faced each other before, and the bout may have set the tone for tomorrow’s matchup. 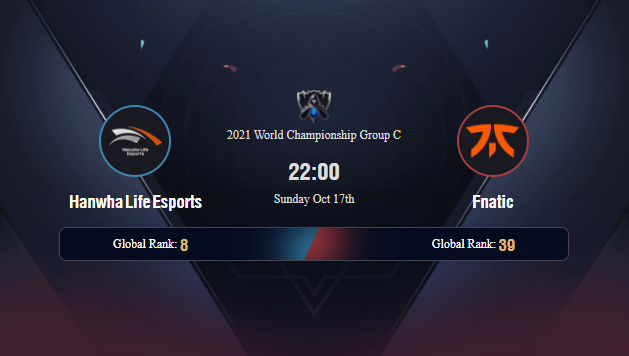 In the first match between these teams, Fnatic took control early and dictated the pace. They restricted Willers development almost entirely in the early stage by invading the jungle, but their defeat in the first few teamfights wiped out any lead they had accumulated.

Fnatics aggressive offense opened up gaps in their defense, and Hanwha Life Esports took full advantage of them. HLE seized the opportunity to turn the situation around and secure the win.

Fnatic did a good job setting up an early attack, but their impatience in subsequent battles wiped out any lead they had built up. If they can play more cautiously in this second matchup and use their lead to gather more resources in the jungle, they can develop more sustainably and have a real chance at pulling off a victory. Considering Fnatics odds at 3.264, according to DJ Esports, they are an attractive choice for a big payday.

HLE dont usually place great importance on the Rift Herald. Their top laner, Mogan, can be described as adequate, which often causes the team to miss out on securing the objective. Over their seven games in the finals, HLE only scored the first Herald in three of them. Their first Herald rate over their last 25 games is an abysmal 38 percent.

On the other hand, Fnatic highly value the Rift Herald. DJ Esports measures their First Herald rate over their last 25 games at a respectable 63 percent. They tend to focus on the Herald early in hopes of widening their lead. Fnatics odds of taking the first Herald are 2.314, according to DJ Esports.

On the other side of the map, HLEs bot laner, Deft, has impressive teamfighting abilities and lane control. Their Jungler, Willer, typically focuses on the bot lane to help Def develop quickly. This has the added benefit of providing them with more opportunities to control the first dragon of the game. Over their last 25 games, HLE have secured the First Dragon 80 percent of the time.

So far at Worlds, they havent changed their style. In their eight matches in the competition so far, they only lost the first dragon in their matchup against Infinity Esports. This shows the importance of the dragon for HLE. In this game, HLE are likely to protect the development of Deft, launch an offense around the lower half of the map, and wait for the opportunity to control the first dragon.

Fnatic paid less attention to the lower half after replacing Upset, which may be a signal that they have shifted their tactical focus to the upper half. The dragons are extremely important to HLE, and they are more likely to invest more energy in the competition for the dragons. The first dragon in HLE is a highly stable choice.

Considering FNC prefer a lineup more focused on small-scale teamfights, they will have an advantage in the upper- and mid-field. Expect them to turn any small win into an opening for a larger lead. With this focus on small early fights, its quite likely that FNC will pull off the first five kills at odds of 2.638, according to DJ Esports.

In the last matchup, FNC found some success in the field. Unfortunately for them, their overt aggression failed to find a rhythm and left openings for HLE to exploit. Can FNC learn the lessons of the previous game and take revenge on HLE?

Do you agree with our picks? Think you can do better? Head over to DJ Esports Discord or check out its website and start betting today for free.