Three League titans are reuniting at Worlds a half-decade later.

The groups for the main event of the 2022 League of Legends World Championship were drawn earlier today, and in one group, a three-way rematch between some of the most storied teams in pro League history is on the horizon, five years after the last time they were all piled into one group draw.

Furthermore, the three veteran League mid laners who faced off against each other in the group stage at Worlds half a decade ago will now go toe-to-toe once again.

Group A of the Worlds 2022 group stage features North America LCS champions Cloud9 alongside T1 and Edward Gaming, two teams who finished second and third in their respective regions this summer.  All three mid laners from those squadsJensen, Faker, and Scoutwill face off against each other again when Worlds comes to North America next month, just as they did at Worlds five years ago.

T1, EDG and C9 not only played in the same group in 2017 but also all still have the same mid laners, Faker Scout and Jensen

In 2017, EDG, T1 (then SK Telecom T1), and C9 were all drawn into the same group, with EDG as the pool one team and SKT as the pool two team. C9 was added to the group later in the tournament after making it through the Worlds play-in stage.

In the end, it was SKT and C9 who advanced out of the League Worlds group, while EDG missed the cut along with Taiwanese ahq eSports club out of the LMS competition. 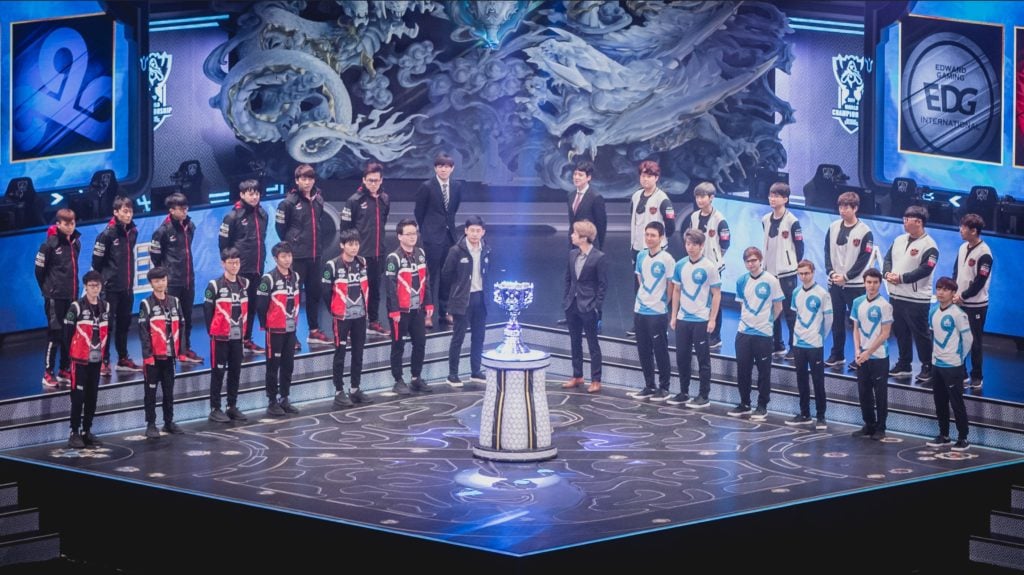 Since then, Scout and Faker remained with their orgs, while Jensen moved over to Team Liquid for three seasons before rejoining Cloud9 in 2022. The only other player still with their respective team from Worlds 2017 apart from the three mid laners is EDG support Meiko, who has played all eight seasons of his pro career with the LPL titans.

Anyone remember the last time C9 got into a group with T1 and EDG???

Last season, C9, T1, and EDG all made Worlds, with each team making a deeper tournament run than the last. C9 was eliminated in the quarterfinals, while T1 went home in the semifinals, and EDG walked away with the Summoners Cup.

T1 and EDG faced off against each other as recently as last year, as they were drawn into the same group at last seasons World Championship too.

C9 and T1, despite qualifying for seven international tournaments between them since 2017, have not faced each other in a professional League match since Worlds 2017. T1 holds a perfect 5-0 record against C9 dating back to 2014. The two teams have not played each other in any best-of-fives in their histories.

C9, T1, and EDG will have a little under a month to prepare for one another, as the Worlds group stage is set to begin on Friday, Oct. 7.

Scout, Faker, and Jensen will need no introduction to each other, though.