The MMO is as popular as ever.

Final Fantasy XIV has reached a new all-time peak player count on Steam today thanks to the launch of the new Endwalker expansion’s early access period.

The new peak of 74,321, according to SteamCharts, will likely be surpassed in the coming days as more players log on to experience Endwalker for the first time. But for now, the MMORPG is as popular as ever. The peak is way up from a high of 42,433 players in November, but its previous all-time peak was 67,019 this past July. 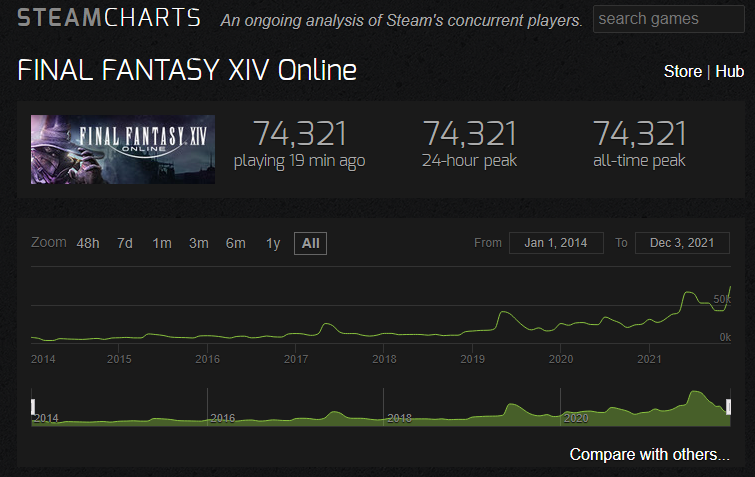 The player count graph shown in the image above is indicative of how FF14’s popularity has continued to rise over the past few years. With major updates every few months and expansions coming seemingly every two years, it doesn’t look like the game will be slowing down, either.

Endwalker was delayed from its traditional summer release due to the ongoing COVID-19 pandemic, but it’s out now and players couldn’t be happier to jump back into Eorzea with their friends.

The new expansion features a new level cap of 80, new dungeons and raids, new zones, two new jobs, and some significant changes to how the battle system works.

Endwalker fully releases to everyone next week on Dec. 7.

Latest comments
No comments yet
Why not be the first to comment?
Featured news
MMO4 hours ago

Here are the notes and updates for FFXIV Patch 6.08