It's time to see if any amateur teams can take down the CDL franchises.

Before the 2022 Call of Duty League mid-season break ends ahead of the Major Three qualifiers, all 12 franchises and four Challengers teams will head to Columbus, Ohio to fight for the $100,000 first-place prize at the first CDL Pro-Am Classic event.

The 16-team tournament will see each team battle in their group in a round-robin format to try to qualify for the eight-team single-elimination bracket that will determine the champion. 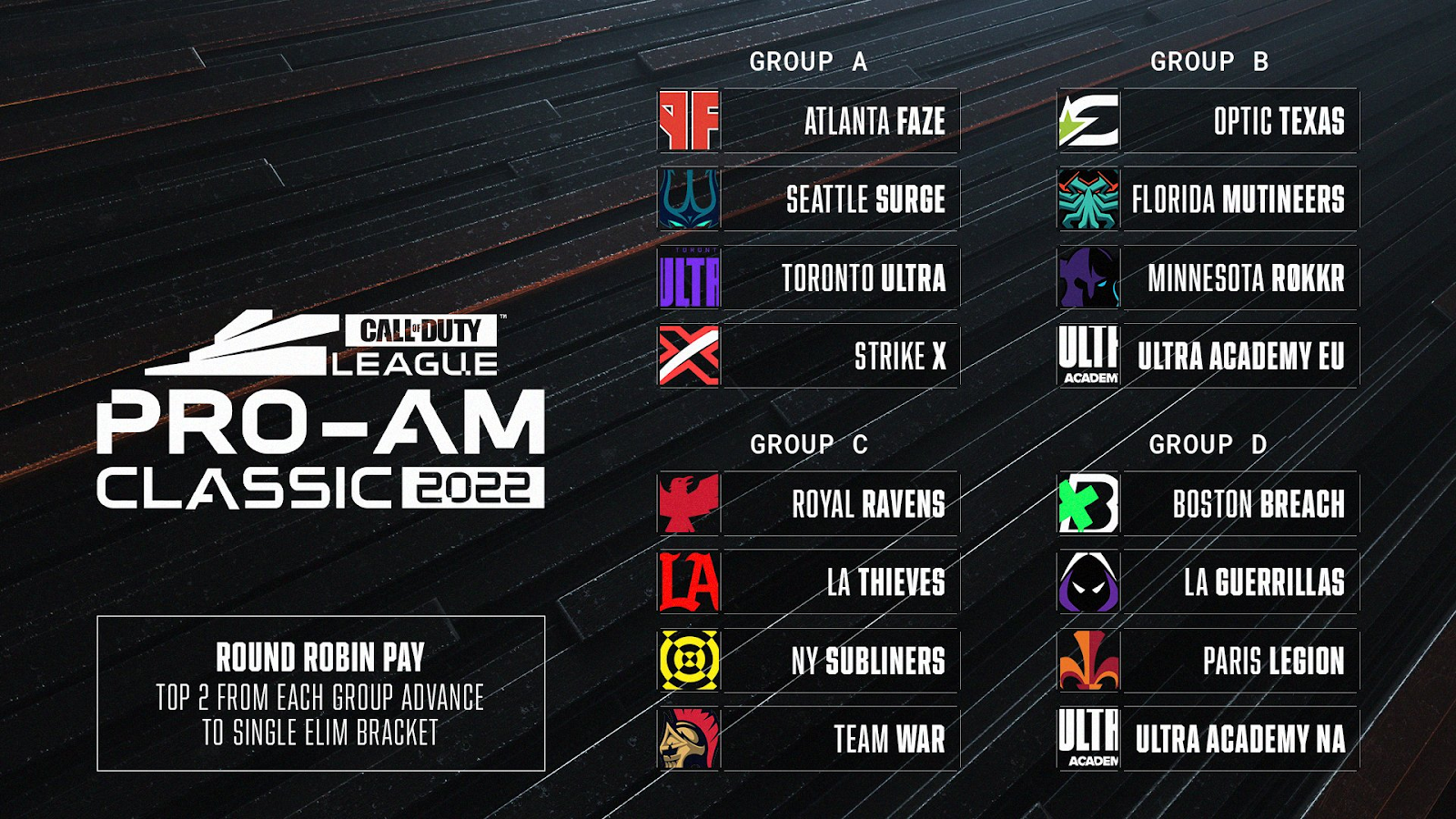 Image via Call of Duty League

Heres everything you need to know about the 2022 CDL Pro-Am Classic.

Who will come out on top? The Challengers or the Pros

During the mid-season break, various teams announced they would be holding trials with Challengers players ahead of the Pro-Am Classic. The Minnesota RØKKR has benched MajorManiak and brought Havok back to the CDL for the upcoming tournament.

Last time I talked to you guys, we informed you that we will be conducting trials to figure out the direction we wanted to go in with our roster going forward, RØKKR coach Saintt said in Minnesota’s video announcement. [Havok] has been dominating the Challengers scene for a few months now, winning seven cups in a row and has been dominating with an SMG.

The New York Subliners were also among the teams conducting trials after Crimsix said to his stream that neither he nor HyDra were scrimming at that current time. NYSL is yet to announce its roster going forward.

Due to personal issues, Gismo has been benched from his starting position with the London Royal Ravens, meaning Harry will depart Ultra Academy EU for the foreseeable future. With less than two days until the Pro-Am Classic begins, Ultra Academy EU has picked up Rafi to join its roster.

OpTic Texas also made a change heading into the Pro-Am Classic due to iLLeY sustaining a thumb injury. Therefore, General will move into OpTic’s starting roster for this event. ILLeY will likely be back for the Major Three qualifiers, according to OpTic coach Rambo.

Here are the teams and lineups heading into the Pro-Am Classic (New York’s roster is the only one that has yet to be officially announced):

The Pro-Am Classic will take place from May 5 to 8 and will be broadcasted live across four streamsMain, Bravo, Charlie, and Deltafrom the Call of Duty League’s YouTube channel.