Everything that happened in Apex Legends’ lore in 2021

From Fuse to Ash and everything in between.

This year was closer to a decade in the lore of Apex Legends. Fans got to see an avalanche of storylines with new and old legends alikeand that’s even before taking into account the 208-page lore book Respawn Entertainment released in February.

A lot happened in Apex even outside of Pathfinder’s Quest. Respawn gave fans four new challengers, a new map, and stronger links to Titanfall than ever with the arrivals of Valkyrie and Ash. The season nine quest, The Legacy Antigen, had two parallel storylinesboth essential to setting up key developments for some of the legends and for the big-picture lore.

It’s easy to feel lost with so many arcs and narratives happening throughout the year. Here’s a rundown of the major story events that took place in Apex in 2021.

Season eight: Fuse, Armageddon, and a lot of arm puns

Our first legend of 2021 came in with a blast. Walter Fuse Fitzroy, Apex‘s Explosives Enthusiast, joined the Apex Games in season eight hailing from the planet Salvo. His planet had been fighting off the Syndicate’s advances for decades, but this resistance created a fickle balance of power with several warlords gunning for the crown. Despite Salvo’s refusal to join the Syndicate when the Outlands Civil War ended in 2722, the planet backtracked and signed the Treaty with the Syndicate over a decade later.

Fuse’s arrival came in with a storyline of his own. For the season eight quest, Armageddon, the legends took on Mad Maggie after she attacked Kings Canyon. This insular storyline ended with Maggie’s perceived death.

Maggie attacked Fuse and the explosion sent them both flying. They held onto a ledge, but she let go and dropped to her presumed demise. Armageddon didn’t have a tremendous impact on the rest of the story, at least for now, but it set up important development for Fuse.

In addition to the quest, Respawn published two important pieces of information on Twitter. The first was the two-part comic involving Caustic and Wattson, which related to the scientist’s plans to gas Solace and how Wattson defused his attempt. The other relates to Wraith and Bangalore and kicks off an important arc that would reappear in the following season, The Legacy Antigen. We’ve covered those in more detail in our season eight lore recap. 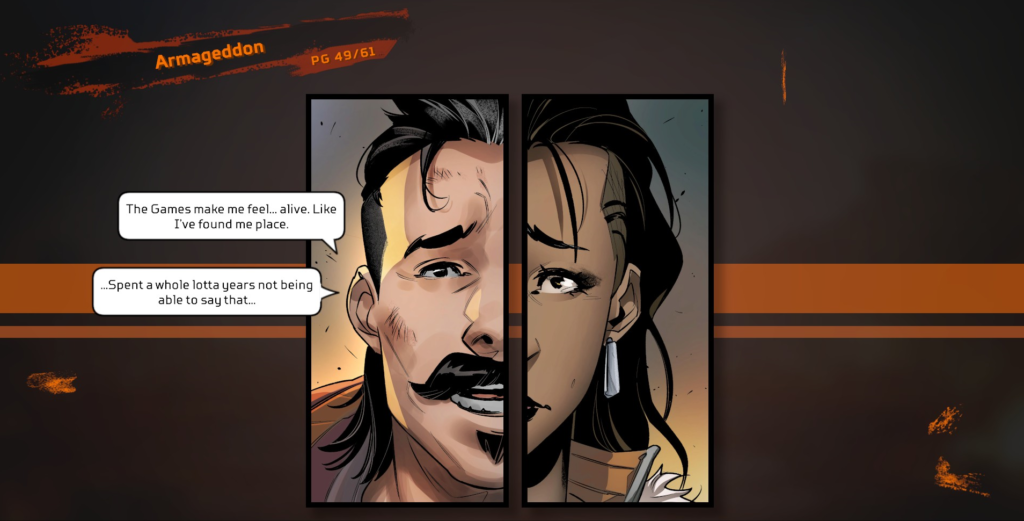 Pathfinder’s Quest and “The Truth”

Pathfinder’s Quest was arguably the most significant part of Apex lore in 2021. The 208-page book gives out several details about the Outlands, the Syndicate, and the Frontier War, and helps shed some light on what happened to the universeand the legendsin the 18 years between the end of the Frontier War and Apex.

The book also revealed the answers to a handful of mysteries in one go, including the identity of Pathfinder’s creatoror rather, creators. Pathfinder was created by The Group, a cluster of scientists tasked with solving the Outlands’ energy crisis in the late 2650s. It was the same energy crisis Horizon identified years prior and The Group was looking for a way to refine Branthium, as discovered by Horizon.

The ending of Pathfinder’s Quest was turned into an official short called The Truth, made by GoldenLane Studios. It recounts the most important moments: How Dr. Reid turned on The Group, how Pathfinder’s creators saved the Outlands by rerouting the Branthium, and their grim fates. For those who didn’t read Pathfinder’s Quest, this short is essential to understanding the storyline between Horizon, Dr. Reid, and Ash.

Apex’s ninth season is a blast from the past. Titanfall 2 players are familiar with the horrifying noise of Viper’s Flight Core during the boss fight. Now, they can meet his daughterand the skies belong to her.

Valkyrie made a Titan-sized impression when she landed in the Apex Games in season nine. She blamed Kuben Blisk, the former leader of the Apex Predators and current Apex Games commissioner, for her father’s death.

Blisk gave her a chance to start anew and away from the shadow of her father: a card to the Apex Games. This brought Valkyrie into the fray, but it was part of The Legacy Antigen, Apex’s longest quest so far. This two-part quest set up tremendously important arcs for several characters. We’ve covered it in detail in our dedicated Legacy Antigen recap.

Season 10: The emergence of Seer

If Valkyrie brought strong ties to Titanfall, her successor came out of nowherebut that doesn’t mean he didn’t steal fans’ hearts. Seer, the Ambush Artist from Boreas, made his way to the Apex Games from the Arenas and the build-up to his release was as unique as him.

Related: Everything we know about Seer in Apex Legends

Instead of outright announcing the new legend, Respawn teased Seer with a folk tale called The Moth and the Flame, which told of a curse. This story turned out to be part of Boreas folklore and helped explain why Seer’s community believed he was cursed. The night he was born, an asteroid shattered the planet’s moon and they took it as an ill omen.

Seer is about rising past that perceived curse. In a season 10 loading screen, he said flaws or curses are what make people strong and unique, as long as they define that curse themselves and don’t let others define it for them. The artist is the embodiment of that principle, taking ownership of this curse and turning it into part of his persona. The boy born under a bad omen and a terrible myth has taken this tale and created an even greater legend. He is Seer an icon of the shunned, the unaccepted, and the unabashedly original, his bio says.

Though season 10 was mostly light on lore, fans also had a bite-sized chronicle starring Bloodhound. The Technological Tracker confronted their guilt over several of their shortcomingsand eventually overcame it.

This in-game story event had players follow the White Raven, a manifestation of Bloodhound’s guilt. The animal taunted Bloodhound over their failures, and in the epilogue, it points out several moments where the legend perceives their failure.

My parents, Boone to taka responsibility for all is to taka the power of the gods, Bloodhound says. I am no god. And I am not nothing. I am Blódhundr.

The Chronicle ended with Bloodhound rising past the darkness of their perceived failures, coming out owning the title of Blódhundrand presumably forgiving themself and shedding the lion’s share of guilt from those situations.

By the end of season 10, fans were excited about what new stories could be brewing on the horizonand Respawn was happy to give them a taste. A series of Bangalore teasers at the tail end of Emergence showed the crash site of the IMS Hestia, the ship in which Bangalore and her brother Jackson were stationed for years after the battle of Gridiron. Though everyone believed Jackson was dead, Bangalore knew he’s alive and she’s trying her hardest to find him.

The teasers pointed to somewhere called Storm Point, in Gaea. Though it gave fans a glimpse of a new arena in the next season, the weeks that followed brought far more than just a new venue for the Apex Games.

Horizon wakes up a simulacrum

A series of Twitter comics signaled the build-up to Ash’s arrival as a contestant in the Apex Games. Horizon was still looking for answers for the whereabouts of her son and she believed Ash could know about that. To Horizon, Ash was the simulacrum version of her old friend, Lilian Peck, the founder of Olympus. She couldn’t have been more wrong.

After the season five quest, when the legends assembled Ash, Hammond Robotics took the Olympus access codes out of Ash’s memory banks. Horizon believed the only person who could know those was Lilian, and therefore, Ash would have to be Lilian Peck.

Horizon set off to figure out how to “wake up” Ash and break the illusion she was a simulacrum, so she runs to the only being with that experience: Revenant. The immortal murder robot lets it slip that newer simulacra have special codes that will trigger the process and Crypto provides her with the necessary codes.

Horizon goes to read the access codes to Ash, but Revenant sneaked behind her and tried to keep Ash from seeing a similar fate as him. Horizon manages to read the sequence and successfully “wakes up” Ash. But she’s not who Horizon thought she was. This moment set off the storyline for the next season, including Ashes to Ashes, Ash’s episode of Stories from the Outlands.

Ash has had one of the longest build-ups to her release in Apex history so farand that’s even if you don’t count the two and a half years (and roughly two in-universe decades) between Titanfall 2 and Apex. Ash appeared as the artifact the legends assembled in The Broken Ghost and has been a part of the lore ever since.

Ash’s arrival also touches on Horizon’s long-running story arc after Respawn revealed what fans had suspected for nearly a year: that Ash was in fact Dr. Reid, Horizon’s assistant who left her stranded in space.

As Dr. Ashleigh Reid’s body was dying after the events of Pathfinder’s Quest in 2658, Hammond Robotics personnel saved her by turning her into a simulacrum. The trauma from the experienceboth the imminent death and the simulacrum processsplit her into two different personalities, Ash and Leigh. Ash takes control most of the time and is the cutthroat mercenary fans saw in Titanfall 2. Leigh is dormant, though she appears in specific moments and in some in-game quips.

Leigh knows what happened to Horizon’s son, Newton. Reid seemed to be one of the few people to know he left the lab before the explosion, but he was presumed dead.

Leigh wants to tell Horizon what she knows. Ash won’t let her.

This dilemma kicked off a significant part of the story this season and is running through the seasonal quest, Trouble in Paradise. That’s the brunt of the lore so far, but that’s not all. Escape also introduced fans to the tropical paradise of Storm Point in Gaea, a paradisiac and derelict island. The former IMC base was abandoned when the Corporation pulled out of the Outlands and also by the people of Gaeauntil the Syndicate found it, that is.

Storm Point still houses several secrets that will likely surface next year. The remains of Bangalore and Jackson’s ship, the IMS Hestia, are a Storm Point POI called Shipfall and it could eventually serve as another plot point for that story arc. Additionally, Wattson, Crypto, and Wraith are looking to rebuild a computer, according to the Paquette Repair Service loading screen. The season 11 quest, Trouble In Paradise, promises to set up major developments for Ash, Leigh, Horizon, and Apex’s big-picture lore. And that’s even before taking into account the four new legends (and possibly a new map) that will release throughout the year.

With so many loose ends and still a fair share of the season quest to go, Apex lore shows great promise in 2022as seen by brilliant storytelling throughout this year.

The post Everything that happened in Apex Legends’ lore in 2021 appeared first on Dot Esports.

There’s a dogfight over Storm Point in new Apex teaser