ESL Pro Tour to feature over 40 CS:GO tournaments in 2023

The dates of some of the best CS:GO events in 2023 have been revealed.

The EPT will feature over 40 CS:GO tournaments in 2023 across several tiers of competition, featuring the best Counter-Strike teams in the world and aspiring squads. EPT Championships encompass the most prestigious events of the circuit, and the year will kick off with one of them: IEM Katowice. The tournament will be held in Poland from Jan. 31 to Feb. 12, while IEM Cologne will run from July 25 to Aug. 6 in Germany. These two tournaments will have a $1 million prize pool each. 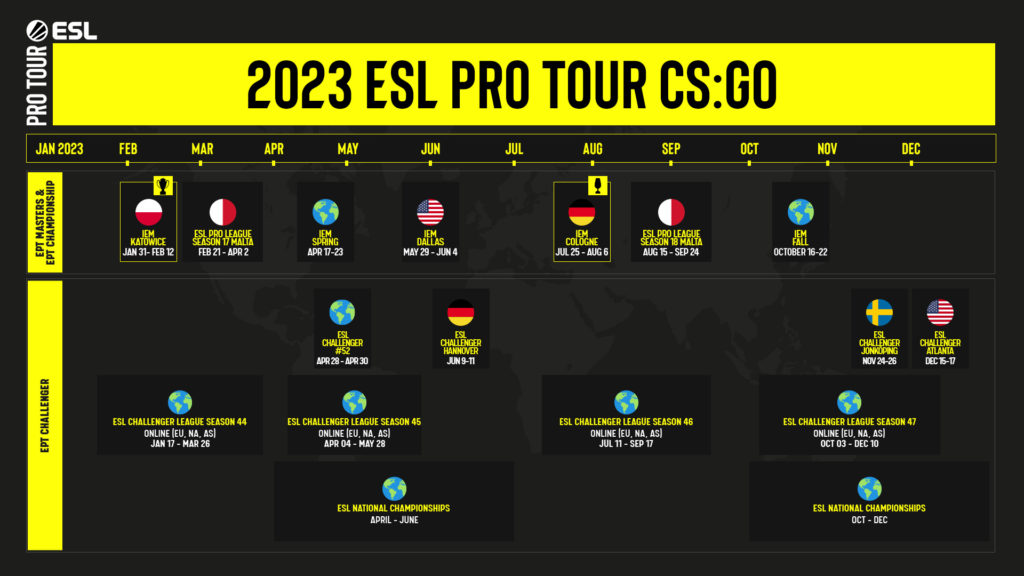 The final tier is the EPT Challengers events. This one is designed to offer national and regional opportunities for teams in development, so they can eventually advance to the EPT Masters level. There will be four editions of the ESL Challenger League in 2023, spanning across all 12 months, in addition to four ESL Challenger tournaments: ESL Challenger 52 (April 28 to 30), ESL Challenger Hannover (June 9 to 11), ESL Challenger Jönköping (Nov. 24 to 26), and ESL Challenger Atlanta (Dec. 15 to 17).

“A clear goal each year is to give players, teams, talent, fans, and partners alike the opportunity to plan their year with us well in advance, ESL FACEIT Group’s senior director of game ecosystems (CS:GO) Shaun Clark said. “Its exciting to be looking forward to over 40+ tournaments around the globe, serving all tiers of the CS:GO competitive pyramid from aspiring to professional. While weve planned out these tournaments, our work is not done, as we look to improve and continuously work on putting on amazing experiences for all of our global community.

The dates for tournaments in Asia Pacific and South America will be revealed later this year along with ESL FACEIT Group’s plans for ESL Impact, the all-women CS:GO circuit launched in 2022.