Encroaching Mycosynth enables unique Artifact combos in MTG Phyrexia: All Will Be One

The Phyrexians found a way to turn a library into an Artifact.

Artifacts are a permanent type in Magic: The Gathering that supports lists by offering strong utility abilities. But decks that are built around the card type can wield greater power and often use powerful interactions that other strategies cant match.

Magic‘s new set, Phyrexia: All Will Be One, introduces a card that will test just how good having every card in your deck be an Artifact can be. Encroaching Mycosynth is a new Artifact that can transform nonland permanents across zones. This card thematically represents the process of Phyrexians turning all organic life into artifice. It’s a strong effect that harkens back to cards in Magic‘s history that have spawned unique combo decks in previous Standard formats.

Artifact is a powerful card type. This has led to past sets centered around it, like New Phyrexia and Mirrodin Block, releasing some of the most powerful cards in the games history that still dominate eternal formats today. ONE is similarly focused on Artifacts and may contain potent tools that will elevate what Encroaching Mycosynth is capable of. 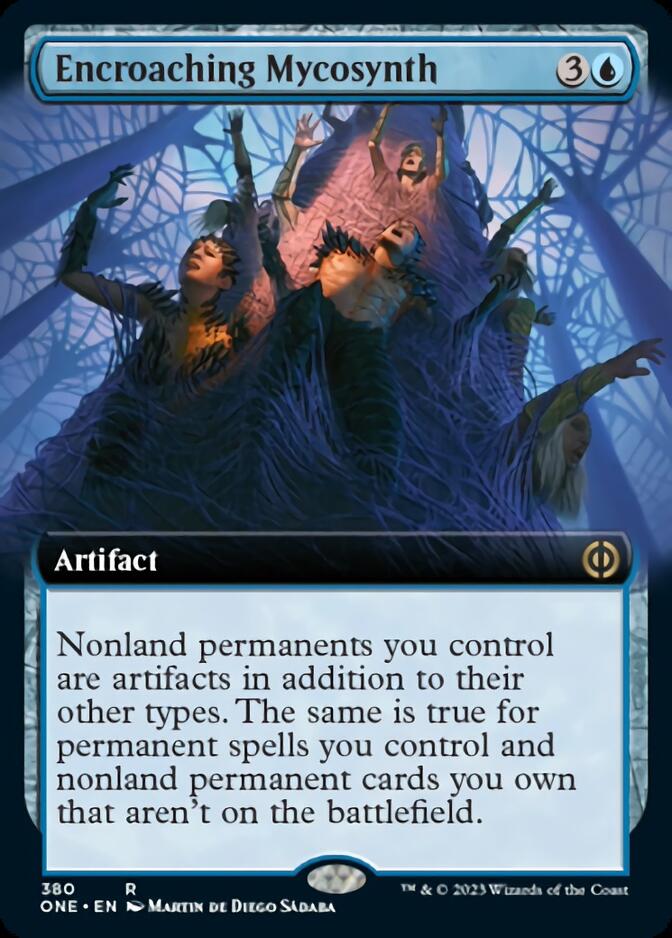 This type of global effect that changes the type of cards in each zone has appeared in Magic before. Ixalan had Arcane Adaptation, which helped enable some off-the-wall strategies due to its ability to change the creature type of all of your spells. Encroaching Mycosynth is similar, but turns all of your nonland permanents, including ones in your library and graveyard, into Artifacts. This transformation is in addition to their other types.

In Standard, there aren’t plenty of great reasons to turn everything into an Artifact, especially with Abrade being a popular removal spell in the format. As the format evolves, there will likely become decks that emerge taking advantage of Encroaching Mycosynths unique effect. Theres some potential for a U/R list looking to combine Encroaching Mycosynths effect with Dragonspark Reactor to take a player out in a single turn.

When looking at older formats like Commander, this card becomes powerful. A simple interaction is with Mystic Forge, allowing you to cast almost every card in your deck off the top since they would be Artifacts. Recursion with cards like Emry, Lurker of the Loch become more potent. Tutors become great. Tezzeret the Seekers second loyalty ability can tutor anything when Encroaching Mycosynth is on the battlefield.

The issue will be running into removal with this card out. A simple Cleansing Wildfire or Vandalblast will wreck your battlefield more than usual because everything is an Artifact. Players can begin experimenting with the full potential of Encroaching Mycosynth when ONE releases on Feb. 10.