The walkout is planned for July 21.

The ABK Workers Alliance is planning a walkout due to attacks on the civil liberties of the employees at Activision Blizzard related to the recent overturn of Roe v. Wade and the company’s healthcare policies, which employees claim do not protect them.

The walkout, which is being organized by the employee-led Committee Against Sex and Gender Discrimination, is scheduled to occur on July 21. Demands were previously made to company leadership, which included things such as changing policies, ending mandatory arbitration, protections from retaliation, expanded parental leave, and more.

In light of the recent attacks on the civil liberties of our employees, the employee-led Committee Against Sex and Gender Discrimination has scheduled a walk out action on July 21st, 2022 (1/17)

A set of walkout demands were posted along with these statements, which address several things, such as the option to work remotely 100 percent of the time or have the option to relocate to an office in a “safe state or country,” relocation assistance, cost of living adjustments for those who move, a health insurance provider that covers transgender and reproductive healthcare, and more. 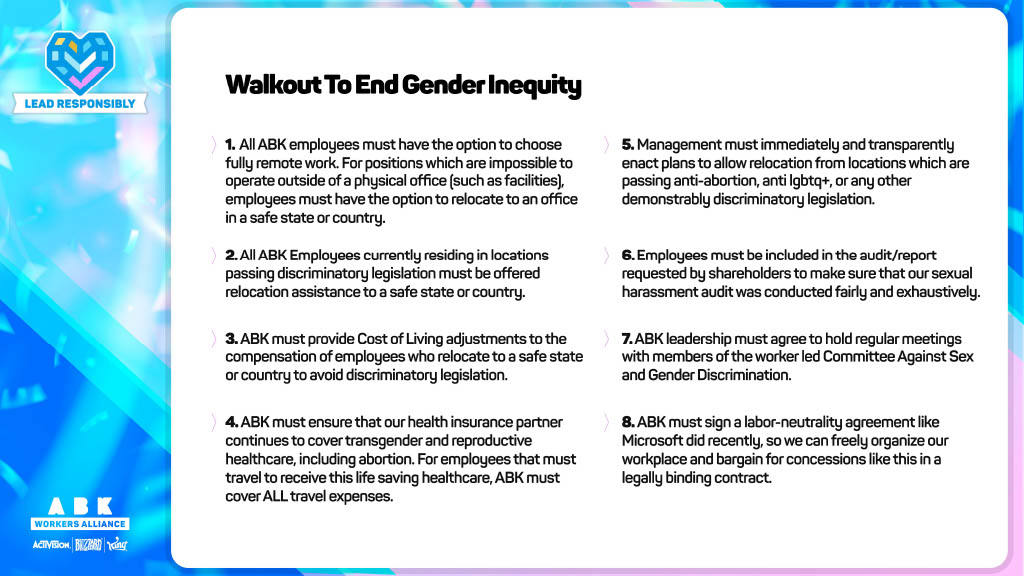 Those who want to support the ABK Workers Alliance and the Committee Against Sex and Gender Discrimination can do so by sharing the tweet with their statement or by contributing to their Strike Fund.

Latest comments
No comments yet
Why not be the first to comment?
Featured news
Business5 hours ago

MoistCritikal plans to expand Moist Esports into other games

Embracer Group to acquire entire worldwide IP rights to Lord of the Rings, The Hobbit