Scry-tribal is a deck now.

Commander Legends: Battle for Baldurs Gate is Magic: The Gatherings second journey into the Dungeons & Dragons universe in a fully draftable, Commander-focused set.

Coming off the original Commander Legends in 2020, Wizards of the Coast is bringing back the series as a follow-up to Adventures in the Forgotten Realms from 2021. Several mechanics like dice rolling and dungeons that were introduced in Forgotten Realms will return in Battle for Baldurs Gate.

Alongside returning mechanics, this iteration of Commander Legends brings iconic characters from the Baldurs Gate series to Magic. One key character thats being represented as a planeswalker is Elminster. Hes a powerful shapeshifting wizard in the Faerûn.

His card design creates Faerie tokens and supports a deck focused on scrying as a way to fuel the spellslinger archetype. 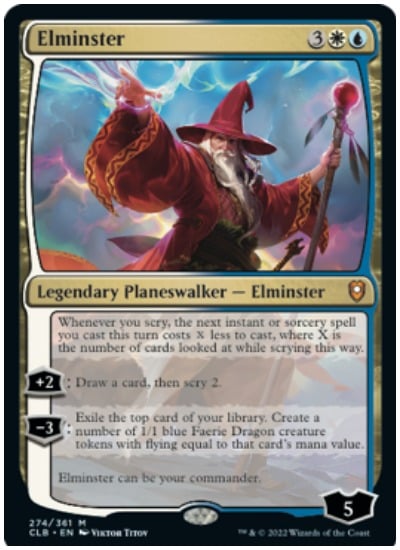 Elminster is another planeswalker that continues the recent trend of Wizards of the Coast using the card type as a way to support specific archetypes rather than being generically powerful. Elminster is a five-mana card that wants to be put at the helm of a deck with a lot of scry effects.

Each scry effect reduces the cost of Instants and Sorcery spells you cast. Cost reduction is always powerful in Magic. Getting cost reduction from scrying is a good way to generate value for something Blue decks are already doing often.

The card is self-sufficient. It can enter the battlefield and immediately draw a card and scry with its +2 ability. Even if Elminster gets removed on sight, it will have at the very least replaced itself and set up the next turns draw step.

A major key to the viability of a planeswalker is being able to protect itself. Elminster does that well with its -3 ability. The cost reduction on Elminster encourages the player to include many expensive spells in the deck. That helps Elminster create several tokens because it’s based on the mana value of the exiled card.

If Battle for Baldurs Gate is anything like the first Commander Legends, then the format will be slow. This makes Elminster a strong option as a Commander because of the card advantage it generates over multiple turns. That will be great in games that go long and other decks run out of gas.

Battle for Baldurs Gate is scheduled for a global tabletop release on June 10.