Elesh Norn returns as ominous villain in MTG Phyrexia: All Will Be One

Soon, everyone will be Compleated.

Coming off a trip to the past, the next step in Magics ongoing story is pushing on in a Phyrexian-dominated world in the games next ser, Phyrexia: All Will be One.

Releasing on Feb. 10, ONE will flesh out a post-rotation Standard thats slowly coming into its own. While the set is a couple of months away, Wizards of the Coast treated fans to a bit of a teaser for whats to come on Weekly MTG today.

The big bad of the storyline is Elesh Norn, a powerful praetor who already boasts an equally powerful card in the game. Her newest version of the White-aligned Phyrexian looks to have a similar impact that wont necessarily just be a finisher in reanimator strategies but a consistent force in White decks across formats. 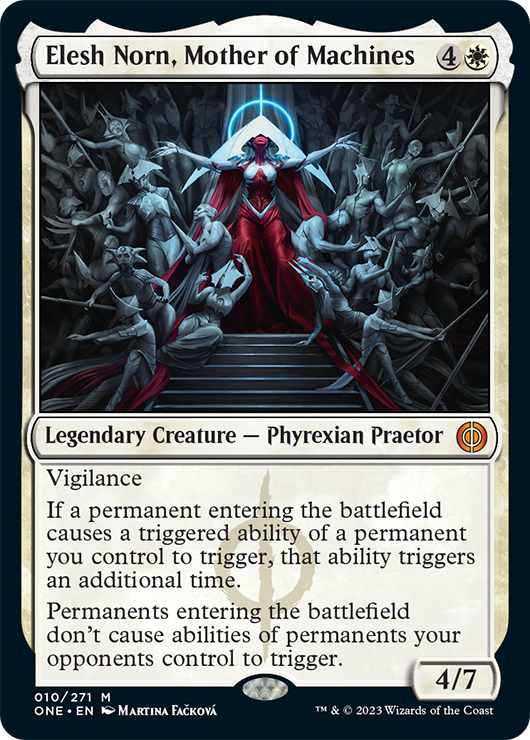 This card will immediately slot into White lists in Standard. It has applications in a variety of archetypes due to its stout body and excellent abilities. At five-mana, Elesh Norn doesnt come with much of a cost. Many White decks in Standardfrom Esper Midrange to Mono-White Midrangecomfortably play five-drop cards like Ao, the Dawn Sky. The 4/7 body helps it dodge almost every piece of Red removal and dominate the battlefield as a blocker.

Elesh Norn doubles up abilities that trigger when a permanent you control enters the battlefield. Looking at current White lists in Standard, this ability works with cards throughout the curve. Small utility creatures like Spirited Companion are made better by drawing you two cards instead. Ambitious Farmhand will grab two basic Plains cards when it enters. These are minor advantages that really add up as the game progresses. The ability also works with more impactful spells like Cemetary Protector to generate a legion of 1/1 tokens even quicker or Brutal Cathar to exile two of the opponents threats.

This card is an extremely disruptive creature that demands an answer if the opponent wants to get value out of their spells.