Things have improved, but history is now but a far off memory.

The final day of The International 2022 is here and the reception to the related battle pass content has cooled significantly after initially being bashed. However, that initial reaction along with the lack of content driving sales has led to the TI11 prize pool falling so far behind the pace of previous years that it is now impossible for it to catch up.

Following a large uptick in sales, thanks partially to an influx of players from The International 2022 Swag Bag giveaway that saw the game break one million players for the first time in three years, TI11s prize pool has surpassed $18 millionand is well on its way to crack $19 million too.

This is a marked improvement from the stagnation in growth the prize pool was experiencing before TI11 began, but it isnt enough to make a difference in the historical standings for both the event and esport as a whole.

Unlike previous years, the 2022 Battle Pass is only adding to the TI11 prize pool for half of its runtime, ending when Part I of its content concludes on Nov. 2. From there, the 25 percent of each purchase that would have gone to the prize pool will instead go directly to Valvesomething that the community has been very vocal about when bashing the content lineup for this battle pass.

Related: Gaben finally welcomed fans to The International 2022, but was it too late?

Due to this cut in time, along with the largely lacking content to push initial sales, TI11 will be the first event in 10 years of The International to not surpass the previous years total. 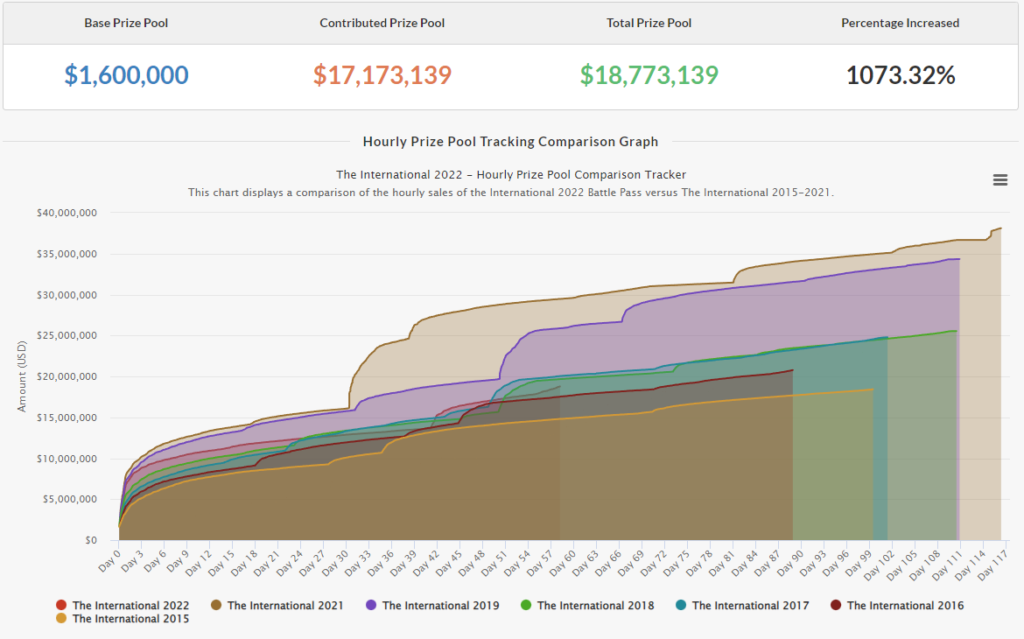 There is absolutely no chance, outside of Valve deciding to extend the pay in period or drop a chunk of cash itself, that TI11 can break TI10s record-setting $40,018,400 total, the first esports tournament to ever break the $40 million mark. Not only that, but at this pace, TI11 likely wont even crack the top five esports tournaments of all time in total prize pool.

Even after infusing some life into the 2022 Battle Pass with a new limited level bundle, the TI11 Swag Bag giveaway, and some other small improvements, it seems like the TI-growth streak snaps at 10 years. It is poetic, in a way, that the events 10-year anniversary will be the one to hold the record heading into the future, but this decrease does have some fans worried about the competitive future of Dota even with Valves recent reassurances.