The numbers don't favor the newest event in the long haul.

The International 2022 prize pool has officially surpassed the $7 million mark in just over 24 hours since the release of the 2022 Dota 2 battle pass, but that figure and timeframe dont tell the full story.

While reaching that milestone in barely a day is impressive, the fact is Valve has seen this same success twice before, in both 2019 and 2021.

The TI11 battle pass is already sitting as the 11th highest esports prize pool of all time and will likely easily break into the top 10 by the start of next week, according to Esports Earnings. But projections currently have it falling short of the previous two TI totals. 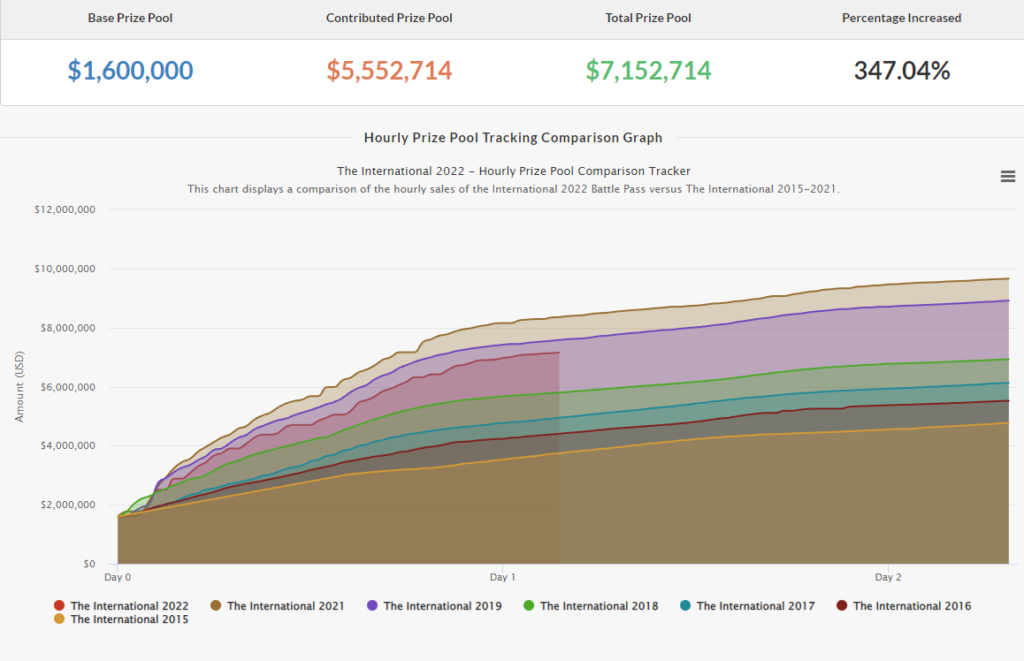 That doesnt look that bad on first viewing since there is always a chance TI11s battle pass sales could continue to rise and will likely see a spike somewhere down the line when Valve pushes more Level Bundles live on Steam. However, the real issue comes with how much time is left on the clock.

While TI9 and TI10 both saw their battle passes launching at various times in May and running well through the Summer, TI11s only launched on Sept. 1 and wont have as long to build momentum. This is due to Valve splitting the 2022 battle pass into two parts and only applying that standard 25 percent purchase pay in for the prize pool to Part I.

Part I is set to end on Nov. 2, just a few days after TI11 ends on Oct. 30. Once that section of the battle pass ends, no additional funds will be added to the events prize pool. This means that, instead of well over three months, TI11 only has two full months to try and keep up with its predecessors.

There is a Part II for the battle pass that will launch on Nov. 3 and run through Jan. 12, but that has no incentives for the competitive community tied to it.

Just based on numbers, there is still a feasible chance that TI11 usurps TI9 for the second-largest esports prize pool of all time. But unless something big changes to drive sales at a much higher rate for multiple weeks, it looks like Dotas 10-year streak of one-upping itself at each TI will end with TI10.