Pick your way to Diamond status.

It’s time to start placing your picks for the IEM Rio CS:GO Major, following Valve’s release of the Major viewer pass on Oct. 21, along with the latest autograph and sticker capsules for the competing players and teams.

For viewer pass owners, it’s another chance to play the most popular fantasy game in CS:GO, the Pick’Em Challenge. In each Major, viewer-pass owners can select their picks for which teams will advance through each stage. For the Challengers and Legends Stage, they’ll also pick which teams will go 0-3 and 3-0, and for the Champions Stage (playoffs), they’ll make choices for each round.

Completing challenges by nailing your picks, or at the very least the majority of your picks, upgrade your IEM Rio event coin. Aside from the pride you acquire from displaying your fully upgraded coin, you can also earn Souvenir Tokens each time the coin is upgraded.

How to play the Pick ‘Em Challenge

After purchasing your viewer pass and activating it in-game, head to the page for the IEM Rio Major, then head to the Pick’ Em Challengers Stage page. Here you’ll see all 16 teams competing in the Challenge Stage, a five-round Swiss System that will see eight teams advance to the Legend Stage.

Drag the team logo for the team you expect to go 3-0 into the 3-0 spot, do the same for your 0-3 prediction, then drag seven more teams that you think will make it to the next stage into the ‘advance’ slots. Of these nine predictions you make, you will need to get at least five right to complete the challenge that goes toward upgrading your coin. 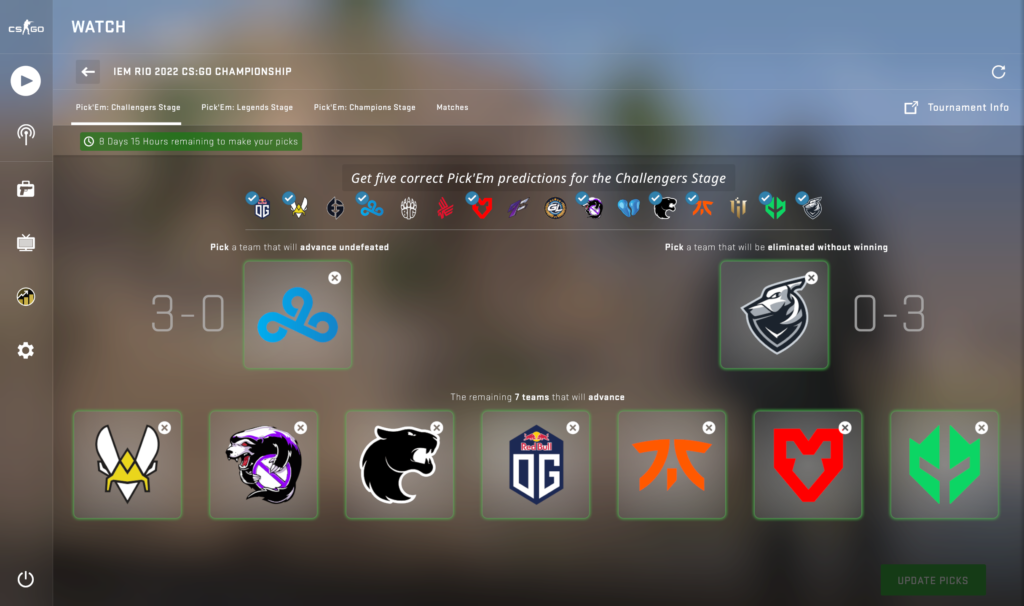 Image via Valve. Picks made by Scott Robertson.

Youll need to fill out the entire playoff bracket for the Champions Stage, including who wins the grand finals. You can complete up to three coin challenges by doing any of the following:

Making the 3-0 pick can be a bit of a challenge since missing this pick could mean missing out on both your 3-0 selection and one of your seven picks to advance. But this leads to people sometimes overthinking and shying away from using their 3-0 pick on a team that’s all but guaranteed to advance.

There are five teams ranked in the top 10 of the global HLTV rankings at the time when the viewer pass released that are in the Challengers Stage. All five (Vitality, C9, Outsiders, FURIA, and MOUZ) should probably be in your picks to advance, and one of them should probably be your 3-0 pick.

As for your 0-3 pick, a safe bet would be to pick either IHC or Greyhound, one of the two teams from the Asia RMR. They just don’t have the consistent experience against top Western teams to really be considered as a team that makes it out of this stage.