Players are getting vocal about their distaste for the BR sequel.

Call of Duty: Warzone 2 released just under two months ago, but some of the community of players and spectators are coming out to speak about how “boring” the game is compared to its predecessor.

Warzone 2 is quite different from the original Warzone, which was released in March 2020 and took the gaming world by storm as society was stuck inside during the COVID-19 pandemic. Now, with plenty of time for players to experience the new title, the complaints are mounting.

In a thread posted on Reddit, the discussion was sparked by a Twitter exchange between community members JGOD and TrueGameData, who basically said Warzone streamers would be even worse off than they are now if there were no nukes to chase.

Warzone 2 is boring. What changes do you need in game? from CODWarzone

Currently, Warzone 2 does not track in-game stats, giving players even less incentive to chase down victories, high-kill games, and more stat-based accolades. Stat-tracking was originally supposed to be added to the game in December but has been delayed indefinitely.

As it stands right now, the meta for Warzone 2 streamers is to win five games in a row to obtain a nuke contract and then try to detonate it, which is an increasingly difficult task especially as viewers try to hunt them down. But other than that, players are finding fewer and fewer reasons to watch streams or log on themselves, according to commenters.

Many streamers have been recruiting viewers to chase down nukes, but viewership has been declining since the new mode launched. According to StreamsCharts, Warzone 2 hasn’t come remotely close to the original game at its peak. 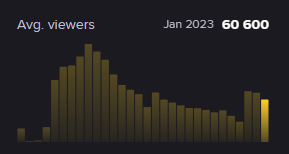 Several commenters in the Reddit thread had suggestions on how to “fix” Warzone, or at least make it less “boring.” Suggestions include increasing the time-to-kill, the return of one-vs-one Gulag battles, and adding more selectable options at buy stations.

It seems as though many in the community are hoping for a return to many of the mechanics featured in the original Warzone game, as opposed to the new features tried by Activision in Warzone 2.

There have already been some changes implemented since Raven Software took over main development of the BR game after launch, including the return of traditional loadouts, so there’s hope for the future that things could get better.

For now, though, it seems it’s basically “nukes or nothing” in CoD’s battle royale.