It's finally happening... but is it enough?

One of League of Legends’ most controversial items, Stopwatch, is getting more changes in the near future with the aim of putting it and the items that build out of it in a healthier spot.

The changes are live on the current PBE and will likely drop on the live servers in the upcoming Patch 12.17.

Originally posted by Surrender@20 mod Spideraxe on Twitter, Stopwatch is having its cost increased from 650 to 750 gold, which by extension is bumping up the cost of Zhonya’s Hourglass and Guardian Angel. 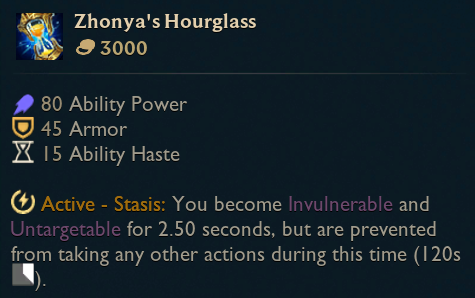 To further push the identity of Zhonya’s Hourglass into that of a premier AP item as opposed to the situational, support-friendly buy it is now, the item is gaining an additional 300 gold cost on top of the 100-gold increase from Stopwatch’s new price. In return, the item is receiving 15 additional Ability Power and five more Ability Haste. Support Amumu players and the like will have to think a little bit harder before dropping a huge chunk of their hard-to-come-by gold on the item. 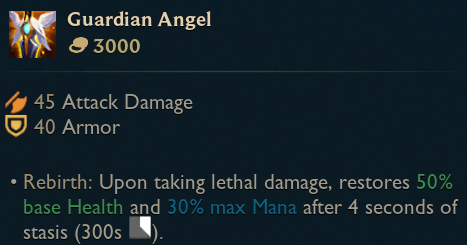 Guardian Angel also saw its combined cost go up to top the item’s total price out at the same 3,000 gold mark as Zhonya’s, but it’s also gaining five AD in stats as a result. Seeker’s Armguard is gaining an additional 10 AP with no cost difference, but its passive, Witch’s Path, will only grant 10 additional armor instead of 15 (20 stacks, down from 30).

Stopwatch itself started being abused in the last few years, especially at the pro level. Players would buy the item before teamfights to be used, sold, and bought again before the next one, leading to high-leverage teamfights in pro play having more potential outplay moments, but ones mostly based on one button rather than champion and teamfight mastery.

In Patch 10.23, the lead-up to the Mythic item overhaul, Stopwatch became a one-use item with the addition of Broken Stopwatch, which is what it would turn into once used as just a component as opposed to being a part of a more expensive item.

Earlier this year, in Patch 12.8, Riot cracked down even harder on Stopwatch abusers, making it so that the item couldn’t be purchased if either a Zhonya’s Hourglass or a Guardian Angel was already in a player’s inventory.