Call of Duty: Vanguard was the second most-downloaded PS5 game of 2021 on the PlayStation Store

Black Ops Cold War and Warzone were huge, too.

Call of Duty: Vanguard was the second most-downloaded game on the PlayStation Store in 2021, second only to NBA 2K22, Sony revealed today.

Vanguard was released on Nov. 5, meaning it had less than two months of sales to make it so high on the list. Black Ops Cold War, 2020’s Call of Duty title, ranked seventh in the U.S. and Canada on the same list while coming in at 15th for Europe. 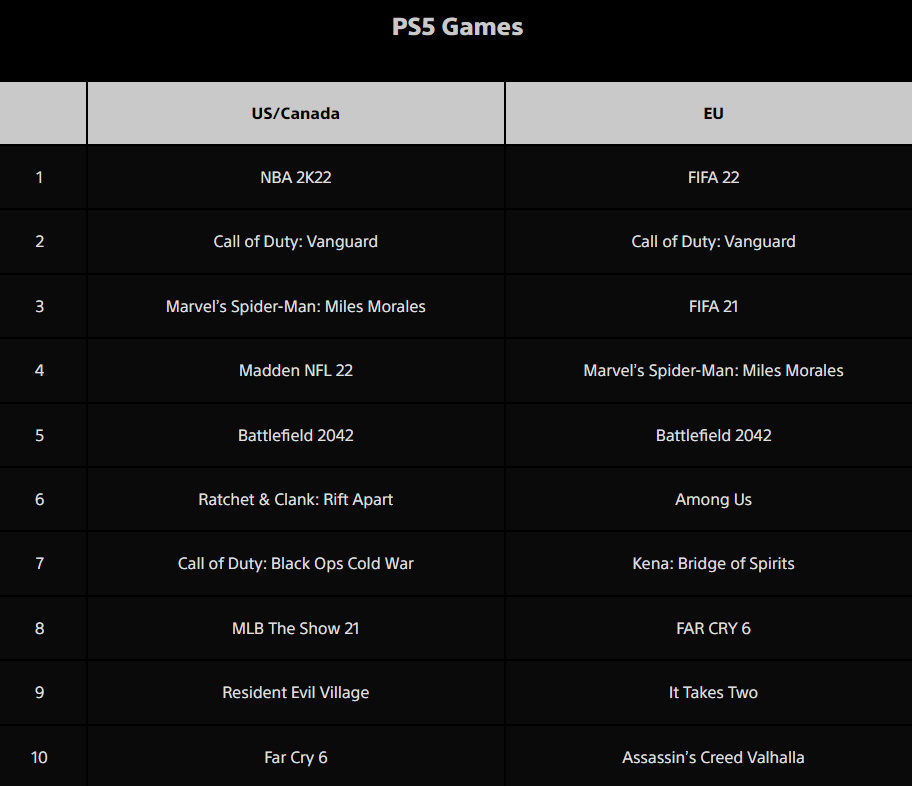 The rest of the top 20 is dominated by sports titles, such as Madden NFL 22, MLB The Show 21, FIFA 22, NBA 2K21, and FIFA 21. Other titles included exclusives like Marvel’s Spider-Man: Miles Morales, Ratchet & Clank: Rift Apart, Returnal, and Kena: Bridge of Spirits.

The list for downloads on the PS4 in 2021 is a bit different. Black Ops Cold War ranked second in the U.S. and Canada, only to Grand Theft Auto V, while Vanguard came in fifth.

Call of Duty: Warzone, meanwhile, was the second most-downloaded game in the U.S. and Canada when it comes to free-to-play titles, beat out only by Fortnite.

Sony releases PS Store numbers each year and Call of Duty and sports titles remain constants when it comes to the highest-selling games. This year was a step down for CoD, though, considering in 2020 the first and third most-downloaded games were Black Ops Cold War and Modern Warfare, respectively.

The post Call of Duty: Vanguard was the second most-downloaded PS5 game of 2021 on the PlayStation Store appeared first on Dot Esports.