The LJL has finally won a best-of-five at Worlds.

If the first game of this series between DetonatioN FocusMe and LOUD told you anything, its that whoever eventually won this series would have to earn it. Dont let the 31 scoreline fool you; DetonatioN FocusMe had to work for their victory over LOUD, especially considering the early hole they dug themselves into.

The victory for DFM also marks a milestone for the LJL, as it’s the first time a Japanese team has ever won a best-of-five match on the international League stage.

#DFMWIN:@teamDFM eliminate @LOUDgg and will face off against @RNG for a spot at the #Worlds2022 Group Stage! pic.twitter.com/oxs3ggWh8F

Game one of the series saw LOUD outlast DFM in the longest game of the World Championship thus far at 44 minutes and 48 seconds. Despite the gold lead changing hands seven different times that game, LOUD held on to take a commanding 1-0 lead in the match. In that game, LOUD ran circles around DFM in the late game, winning largely through tanky frontline champions like Olaf and Amumu.

Ceos Amumu is the only champion the LOUD support found any victories on at all this tournament, as he posted a 41 record with the Sad Mummy and an 05 run with all others. Intelligently, DFM banned Amumu on the first rotation of each ensuing draft throughout the remainder of the series following their opening loss.

.@yutapongo's QUADRA KILL to close out the game! #Worlds2022 pic.twitter.com/RSoasOeM2j

With comfort picks firmly off the board, DFM hunkered down. The LJL champs led game two in wire-to-wire fashion and refused to surrender the gold lead in game three after forcibly taking it at the 14-minute mark.

Game four was all but a formality, as the rolling DFM had an advantage well over 10,000 at the 20-minute mark, and shortly closed out the series a few minutes later.

For the perennial Japanese titans, it was AD Yutapon who put the team squarely on his shoulders. In the series-clinching game, Yutapon went 10/0/1 on KaiSa and closed out the four-game set with a combined scoreline of 34/8/20. 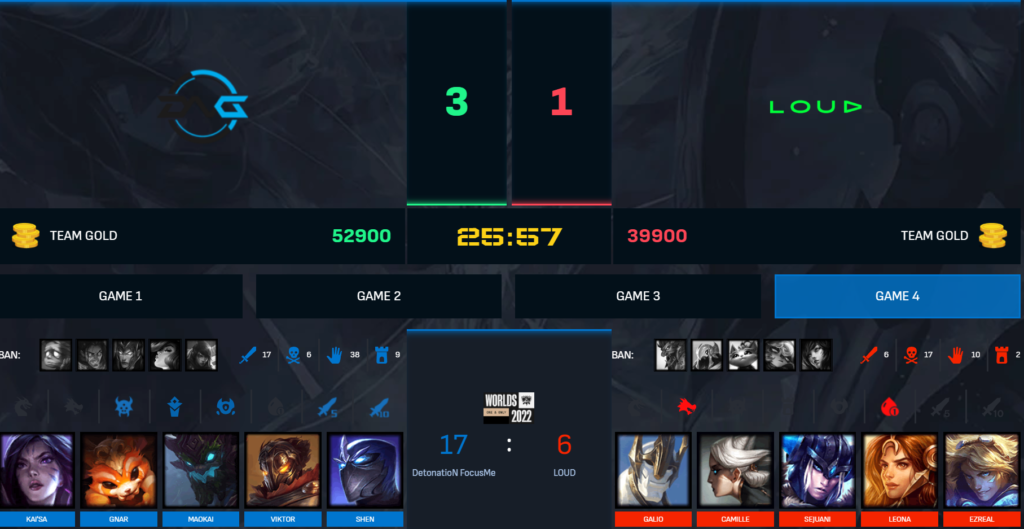 Yutapon, like the majority of his team, found wins on three different League champions in this series. Four of the five players on DFM did not repeat any of their picks across tonights victories. The only player to do so was top laner Evi, who played Gnar in all three wins.

Its a short turnaround for DFM, who have to play another best-of-five a little under 24 hours from now against a much more striking opponent in Royal Never Give Up. Had DFM won yesterdays tiebreaker games, they could have been on the opposite side of the play-in stage knockout bracket awaiting a potential matchup with MAD Lions, who won earlier today.

Instead, itll be the MSI champions for DFM. Theyll face each other for the first time in their respective franchise histories tomorrow, in spite of the fact theyve both attended all four of the last major international League tournaments alongside each other.

Should DFM win that match, they’ll advance to the Worlds group stage for the second consecutive season.