Blue card in MTG Phyrexia: All Will Be One Dominus cycle doubles Proliferate triggers

There's no such thing as too much Proliferate triggers.

The second week of spoilers for Magic: The Gatherings next set Phyrexia: All Will Be One rounded out the Dominus cycle of legendary creatures with the Blue one, Wizards of the Coast announced today.

The Dominus cycle is five Mythic Rare legendary creatures with an activated ability that puts an Indestructible counter on them. They also have abilities that enable the colors main set mechanic.

Each card has the potential to be a standout piece in Standard and potentially show up in Pioneer. Tekuthal, Inquiry Dominus is the Blue card of the cycle that doubles Proliferate triggers and can be effective in combat. 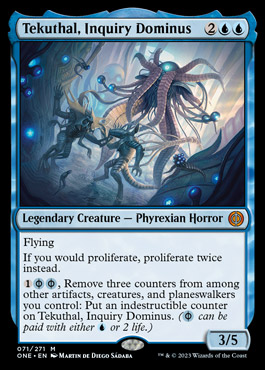 Proliferate is a major returning mechanic in ONE. The set is introducing oil counters to go alongside the counters that are already in Standard like +1/+1 and loyalty. Proliferates applications go far beyond just growing a creature with +1/+1 counters and it should have a significant impact on the format.

Doubling up on Proliferate is a powerful ability. Tekuthal is a solid 3/5 evasive body that can become Indestructible by removing three counters from other permanents you control. This ability shouldnt be that difficult to turn on. Proliferating a creature with a +1/+1 counter on it twice will automatically give you the three requisite counters. Planeswalkers almost always enter the battlefield with more than three loyalty counters that can be removed to give Tekuthal an Indestructible counter. When you do Proliferate, there’s no harm in also adding more Indestructible counters to Tekuthal. This will be useful in preventing the opponent from removing the only counter in some way and leaving Tekuthal vulnerable.

This ability can get out of hand quickly. Itll be a fast way to ultimate a planeswalker through Proliferate. Flying threats can grow quickly, making Tekuthal synergize well with Connive from Streets of New Capenna. Another great synergy is with Saga Enchantments. Proliferating lore counters will allow you to get full value out of that spell in a single turn.

Tekuthal will be a target for removal, so it’s best to prioritize getting the Indestructible counter on it as fast as possible. Once thats done, you can begin running away with the game and drown the opponent in value. This card gets significantly worse in a format with a lot of bounce spells and exile-based removal that gets around Indestructible. In the right matchup, however, Tekuthal will be a dominant force on the battlefield.

Players can get their hands on Tekuthal at ONE prerelease events starting on Feb. 3, followed by a global release on Feb. 10.