"Fear the power you do not see."

After Riot Games sweeping changes to Swains identity in League of Legends, the Grand General of Noxus has taken on a whole new complexion for his role on Summoners Rift.

Instead of having a majority of his power set in his burst ability, the developers have shifted him into a terrorizing drain tank that can continuously absorb the life from his enemies in a teamfight if left alone.

His ultimate ability, Demonic Ascension, has been changed so that it can stay active throughout an entire five-vs-five teamfight, especially if the right runes and items are built to support this playstyle. His tankiness and damage make him a scary prospect to face off against and a fun champion to dominate with in solo queue and beyond.

Here is the best build for Swain in Leagues 12th season. 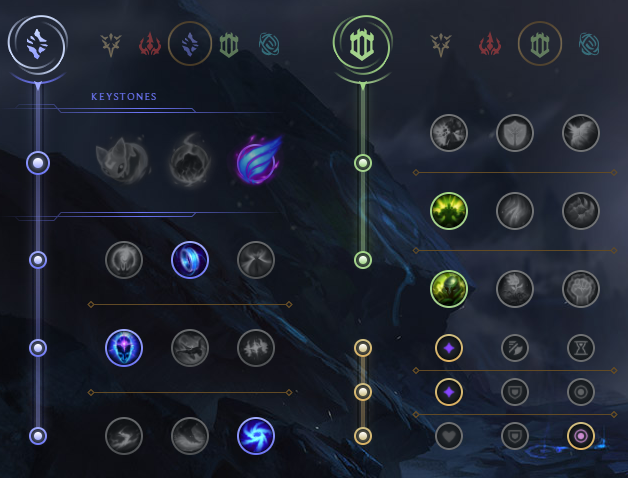 Phase Rush: Swain relies on staying close to his enemies, especially during the later stages of the game when hes draining multiple players of their health in a teamfight. He can, however, be easily avoided since he isnt too fast. By taking Phase Rush, he not only gains a significant movement speed boost but also gets 75 percent slow resistance, allowing him to maintain the range for his Demonic Ascension to sap his enemies of their health.

Manaflow Band: In late-game fights, Swain needs to continuously cast his damaging abilities to help soften up his foes before using the second portion of his ultimate ability, Demonflare. As a result, Manaflow Band is a great tool to expand his mana pool as the game moves forward.

Transcendence: Since the Grand General is focused on becoming an unstoppable drain tank in the later stages of the game, having some scaling power in his runes should help him grow into a menace as he passes through the laning phase of a match. The extra 10 ability haste at level eight should come in handy while trading in lane and in the early skirmishes. Past level 11, Transcendence gives a 20-percent cooldown reduction to basic abilities for every champion takedown, which can help him snowball one kill into a teamfight sweep.

Gathering Storm: In a similar vein to Transcendence, Gathering Storm is another scaling rune that gives him even more strength as he gains levels and items over time. For example, by the 30-minute mark, he will have gotten an extra 48 AP on top of the items hes bought.

Conditioning: As another scaling rune, Conditioning gives Swain nine armor, nine magic resist after 12 minutes, along with a five-percent increase to both stats as well. Instead of damage, this gives Swain the durability to withstand the barrage of damage headed his way as the boss music starts to play.

Overgrowth: This rune piles onto Swains health pool by giving him three bonus health every time minions or monsters die near him. After 120 monsters or minions have died near Swain, hell even gain an additional 3.5 percent to his max health.

The extra AP is pretty important for Swain, especially in trades against your opponent in lane. His healing factor is non-existent in the early game, so playing around the minions and farming well is key to a good transition to the mid-to-late game.

The fun begins once Swain gets access to his ultimate ability. By grabbing the Liandrys Anguish-Zhonyas Hourglass package, you can pull off a menacing combo where you pop Demonic Ascension in the midst of a few enemies, and when youre close to dying, activate stasis. Not only does Swains ultimate heal himself while invincible, but it also ensures that the opponents arent healing due to the burn effect.

There are a few different routes that Swain can go once his core items are bought. For example, players can opt into even more damage-over-time with a Demonic Embrace, while picking up a Rylais Crystal Scepter to help bog down enemies so they cannot escape from Swains ultimate radius.

Other players could also buy into a tankier version of Swain by picking up a Frozen Heart when pitted against deadly AD threats or buying a Spirit Visage against heavy AP combatants. In fact, a Spirit Visage not only gives the player more defense against magic but also increases all healing on Swain by 25 percentincluding his own ult.

Latest comments
No comments yet
Why not be the first to comment?
Featured news
League of Legends36 minutes ago