Bonk your opponent into defeat.

All images via WotC

The release of Innistrad: Midnight Hunt on MTG Arena has opened the door for humans to go Aggro in Magic: The Gathering Standard.

three MID creatures (and one spell) elevate the RW Human Aggro build in conjunction with Rally of the Ranks from Kaldheim: Chaplain of Alms, Intrepid Adversary, Reckless Stormseeker, and Light up the Night. There are other options too, depending on how deep your Wildcard wallet is and what archetype your opponent is playing.

The goal behind the RW Aggro Standard deck is to utilize Reckless Stormseeker, Rally of the Ranks, and Luminarch Aspirant to pump your creatures in a way that your opponent is always at a disadvantage while losing life faster than they can curve out. 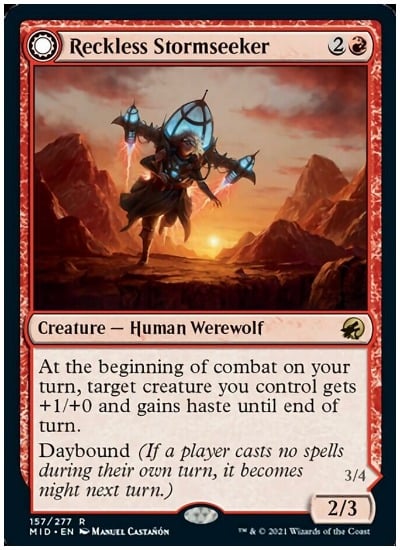 Chaplain of Alms and Dragonkin Berserker are great MTG one and two-drops during the early game, especially when pumped with counters. They also help stabilize your board during the mid game by having First Strike. Turn three should always lead to Reckless Stormseeker entering the battlefield, followed by Elite Spellbinder on turn four. If any of the pieces are missing, Rally of the Ranks or Luminarch Aspirant can fill in instead.

Intrepid Adversary, however, is the true star of RW Human Bonk. The MID human scout is a decent early-game creature and a bomb in the late game. Able to provide anthem effects to all your creatures in the late game, Intrepid Adversary can typically activate its mana sink ability one to two times. And in conjunction with Rally of the Ranks, the human scout is a large Lifelink creature that can help you regain board state advantage. 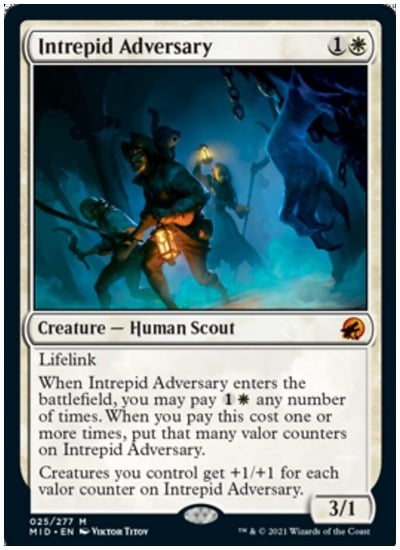 Board wipes and running out of gas are the downfall of all Aggro builds. Two copies of Revitalize can provide the necessary card draw while pumping your health three life points. And two copies of Light Up the Night can provide enough damage to your opponent’s face should you fall short of lethal. Keeping a second copy of Dragonkin Berserker in hand can also help, especially if you have five mana to trigger his dragon-making Boast ability when the human berserker attacks. 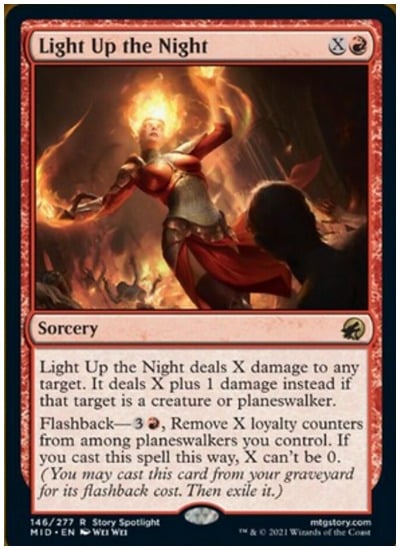 Light Up the Night

Two copies of Adult Gold Dragon are another alternate win-con, thanks to it having Haste, and can always stabilize your life when it is running low. The AFR dragon and one copy of Velomachus Lorehold also synergize with Dragon’s Fire, providing the Instant removal spell with additional power. Goldspan Dragon is also a viable option, especially in conjunction with Light up the Night.

The deck also contains two copies of Rip Apart, with two more within the sideboard to swap out with Dragon’s Fire when facing opponents utilizing cards like The Book of Exalted Deeds and planeswalkers like Wrenn and Seven.

Brutal Cathar is a solid three-drop to slot into the sideboard but isn’t as good as Elite Spellbinder, especially in bo1 matches. Burn Down the House is another great sideboard option, hitting all creatures and planeswalkers with five damage. The Sorcery speed Red spell can also create three 1/1 devil tokens with Haste that deal one damage to any target upon attacking (ideal when your opponent is at three life). 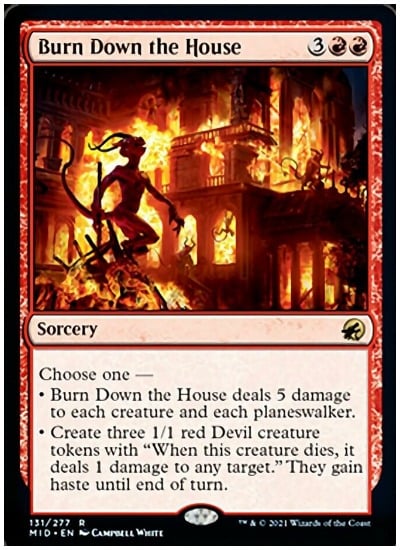 Burn Down the House

Paladin Class is a good sideboard option against Aggro or creature-heavy Midrange builds, as is Adeline, Resplendent Cathar in exchange for Elite Spellbinder. Fateful Absence can easily substitute in for Dragon’s Fire and Sungold Sentinel is a solid two-drop against graveyard shenanigan builds.

RW Humans is an ideal bo1 MTG Arena deck that can also hold its own in the bo3 format. The only downside to bo3 is the number of Rare Wildcards you will need to compete against other popular Standard archetypes.

The deck has its weaknesses, especially against Wrenn and Seven decks, and it’s likely unplayable at high Diamond and Mythic ranks. RW Humans is a blast to play if you enjoy Aggro and is a viable MTG Arena meta deck to use when climbing to Diamond rank. Most importantly, have fun, and enjoy keeping your opponent guessing at your next move.

Latest comments
No comments yet
Why not be the first to comment?
Featured news
MTGan hour ago