Discover the best Limited archetypes and what cards to pick in Draft for support.

Scheduled to release digitally on Sept. 16, Innistrad: Midnight Hunt (MID) contains two non-legendary Uncommon cards for each of the 10 total archetypes. One is a spell with the returning MTG mechanic Flashback, and the other is a creature that supports the archetype’s synergy. Archetype signpost cards are typically legendary creatures, but that isn’t the case in MID, allowing players to Draft multiple copies without them being a dead card in hand.

A total of four MID archetypes initially stand out as potentially the best, based on the Uncommon spells and creatures, Rare/Mythic Rare spells and creatures, and overall synergy for each color pair. Archetypes are subject to change once the MTG set releases and a Limited meta has been established. We will update each entry and the support cards with the global release, scheduled to take place on Sept. 24.

Werewolves are the face of MID and are likely the strongest creature-based archetype in the Magic colors Red and Green. Arlinn, the Pack’s Hope and Tovolar, Dire Overlord, Rare/Mythic Rare first picks, provide a massive amount of support via werewolves on the battlefield and the updated transform mechanic Daybound/Nightbound. 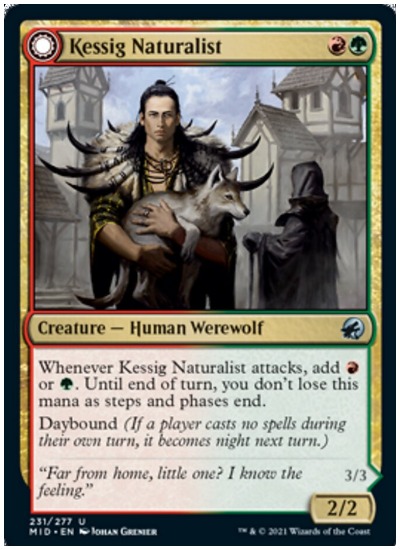 The uncommon Draft signpost creature for RG is Kessig Naturalist. The human werewolf is a two-drop 2/2 who adds either Red or Green mana upon attacking. And the mana remains as steps and phases end, allowing RG players to cast Flash spells on their opponent’s turn. Casting two or more spells on any player’s turn reverts “night” to “day,” which is why casting on your opponent’s turn has its advantages. 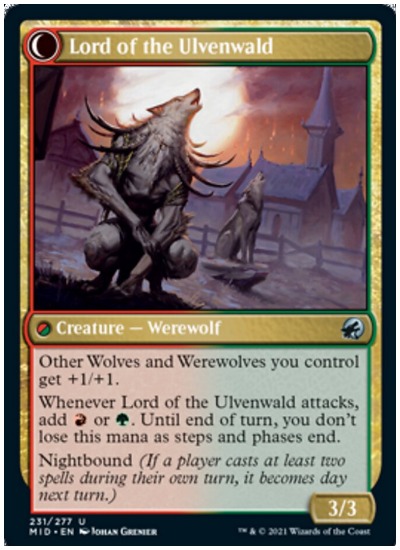 Being a werewolf, Kessig has a backside that he transforms into when it is “night” called Lord of the Ulvenwald. He pumps all werewolves with +1/+1 stats and still adds either Red or Green mana upon attacking. The downside to Kessig Naturalist is that he’s only a 2/2, easy to trade with upon attacking or take out with removal. 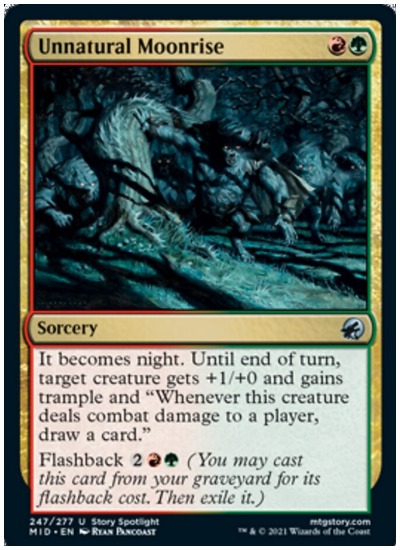 The Uncommon spell is Unnatural Moonrise, turning the battlefield into “night” if it is already “day” upon entering the battlefield. The Sorcery speed spell also pumps a creature +1/+0 and gives it Trample until the end of the turn. Should that creature deal damage to a player, you draw a card.

Unnatural Moonrise has a reasonable 2RG Flashback cost as a bonus. The downside to the Sorcery speed spell is that it fizzles out if the opponent removes the targeted creature.

The new MID mechanic Decayed has a good amount of support in the Magic colors Blue and Black. Supporting self-mill strategies is the multicolor Rare Slogurk, the Overslime, along with Mono-Black bombs Tainted Adversary and Champion of the Perished.

The two-drop Adversary in Black is a zombie 2/3 with Deathtouch with a repeatable mana cost that can get paid upon entering the battlefield. Champion of the Perished gains a +1/+1 counter every time a zombie enters the battlefield. 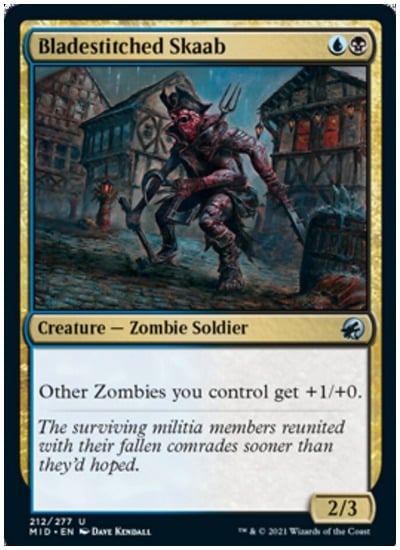 Bladestitched Skaab is the Uncommon MID Draft signpost creature, a two-drop 2/3 that pumps all zombies +1/+0. Decayed zombie tokens are 2/2 creatures that can’t block, making them ideal sacrifice fodder or for attacking in a large group. Increasing their power to three puts a lot more pressure upon an opponent when you choose to attack with them.

There are also a number of Common and Uncommon zombies within the colors Blue and Black. Diregraf Horde is a 3/4 zombie that creates two 2/2 zombie tokens upon entering the battlefield. And Drownyard Amalgam is a solid 3/6 late-game zombie horror that promotes self-mill. 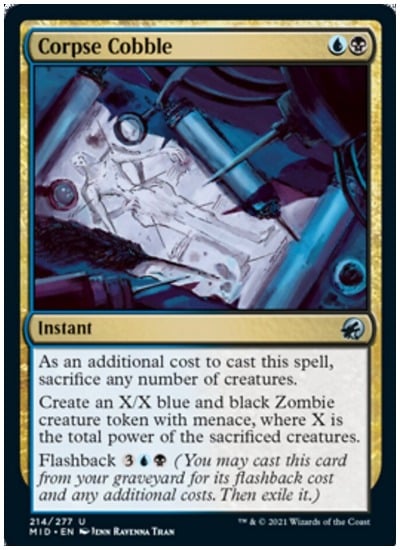 The Uncommon spell with Flashback is Corpse Cobble, an Instant that creates an X/X zombie token with Menace where “X” is the total power of sacrificed creatures. It’s a powerful spell that can turn multiple Decayed zombie tokens into a giant with Menance. Its Flashback cost is 3UB. And with Flashback Corpse, Cobble can get a second use, providing massive amounts of value during the late game.

Humans in Green and White are the counter-archetype to werewolves that use a new MID mechanic called Coven with go-wide strategies. Multicolor Rare/Mythic Rare creatures like Sigarda, Champion of Light and Katilda, Dawnhart Prime are the bombs within GW.

Katilda, Dawnhart Prime is a two-drop mana dork that nails the flavor of GW with protection from werewolves. And Sigarda, Champion of Light pumps all humans with +1/+1 stats, is a 4/4 angel with Trample and Flying, while also having a Coven ability that provides card advantage. 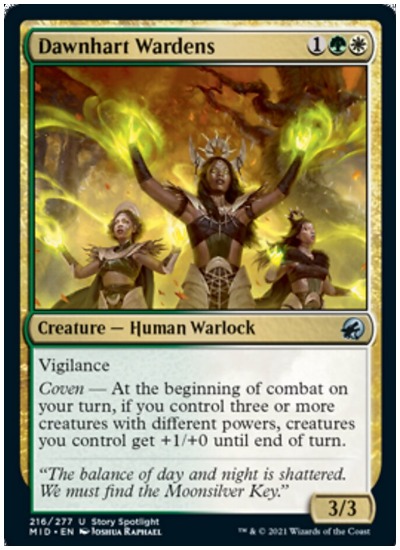 The Uncommon GW signpost creature is Dawnhart Wardens, a three-drop 3/3 with Vigilance. The human warlock also has Coven, pumping creatures with +1/+0 upon being triggered. Vigilance is a powerful keyword on a three-drop in the Limited format, and with 3/3 stats, Dawnhart Wardens can trigger Coven on turn three. 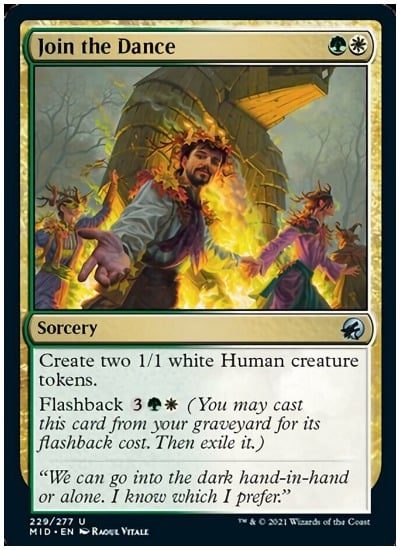 Supporting go-wide strategies and the Coven mechanic is the Uncommon spell Join the Dance. Very few GW cards have a power of one, making the two-drop Sorcery spell an integral piece in triggering Coven as early in the game as possible. And for late-game go-wide tactics, Join the Dance has a Flashback cost of 3GW.

The colors White and Blue in MID utilize the mechanic Disturb, promoting self-mill strategies to cast creatures from the graveyard with their Disturb cost. Upon being cast this way, these Double-Face cards enter the battlefield with their backside up, a more powerful version of their front side.

Dennick, Pious Apprentice is a multicolor Rare creature, and Patrician Geist is a Rare Blue creature, with both supporting WU spirits. Having a Disturb cost himself, Dennick, Pious Apprentice shuts down opponents from targeting cards within graveyards via spells or abilities. He also returns via Disturb as a spirit with Investigate. Patrician Geist is a two-drop spirit knight with Flying that pumps all other spirits you control +1/+1. 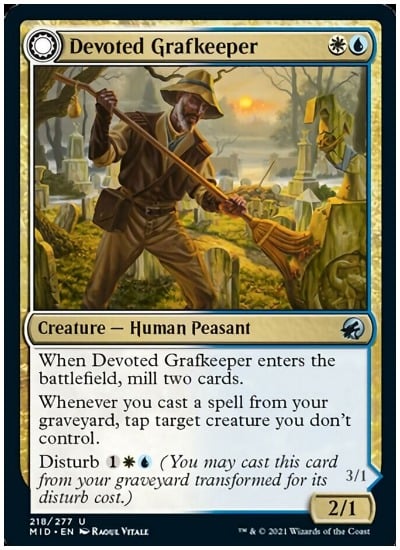 Spirits are well supported in MID in conjunction with the Disturb mechanic. The color White has the one-drops Chaplain of Alms with First Strike and Lunarch Veteran, who provides one life gained upon a creature entering the battlefield. The color Blue has Covetous Castaway supporting self-mill and Overwhelmed Archivist for card advantage. 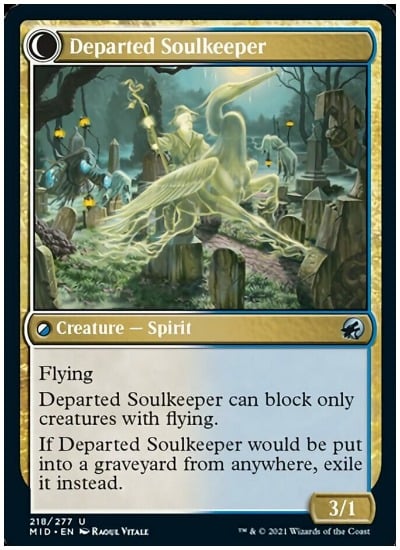 The WU Uncommon signpost creature is Devoted Grafkeeper. He mills two cards upon entering the battlefield and can tap an opponent’s creature whenever you cast cards from the graveyard. Devoted Grafkeeper has a reasonable Disturb cost of 1WU, returning as Departed Soulkeeper, a 3/1 spirit with Flying that can only block other creatures with Flying. 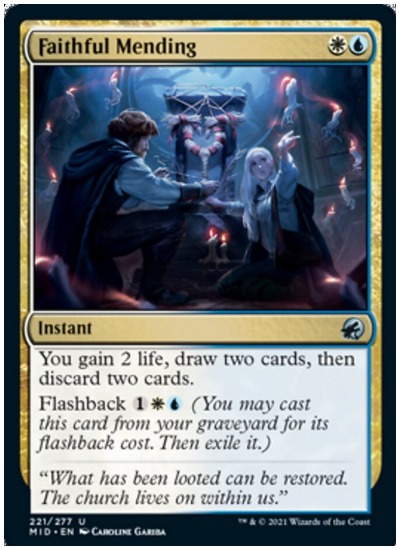 Faithful Mending is the Uncommon Instant spell in WU that gains two life, draws two cards, and then discards two cards into the graveyard. It supports the WU self-mill theme while also acting as a stall with the recovery of two life points. Its Flashback cost is also reasonably priced at 1WU, allowing players to cast it twice in the same turn during the later stages of a game.

Limited Draft and Sealed for the MID set starts digitally on Sept. 16 via Magic Online and MTG Arena. Local game stores will have prerelease events on Sept. 17, and the official global release for Midnight Hunt will take place on Sept. 24.

All images via WotC, Magic: The Gathering.