One of the available weapon types in PUBG is called Designated Marksman Rifle or DMR for short. DMRs are a subset of Sniper Rifles, slotting between the Assault Rifle and Sniper Rifle categorya combination of both. DMRs are slightly less powerful than traditional Sniper Rifles, have similar range, and feature semi-automatic goodness which translates to a higher rate of fire. Gone is the inconvenience of bolt-action Sniper Rifles that requires the chamber to be cleared out upon every shot.

That’s particularly where DMRs shine in PUBG: They provide consistent, suppressive fire from medium to long distances with unrelentless accuracy. If you miss a shot, you still have a magazine full of other bullets ready to go. Catch an enemy out in the open and you have a DMR? Chances are you can take them out before they find sufficient coverthat’s not always the case with Sniper Rifles in PUBG.

Here are the best DMRs in PUBG, taking into account damage output, rate of fire, recoil control, and attachment potential. 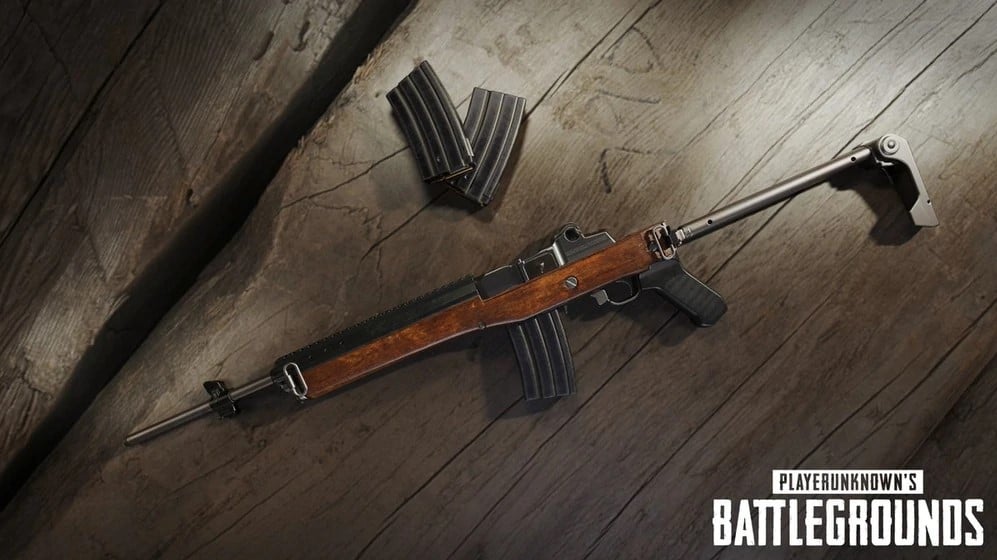 At first glance, the Mini 14 may seem underpowered to some. Likely because it features lower damage compared to the hard-hitting DMRs on this list (SLR, MK14). That statement couldn’t be further from the truth. The Mini 14 boasts speedy bullet velocity and promising accuracy. In terms of the rate of fire, the Mini 14 is considered a semi-automatic weapon. However, tapping the left-click mouse button (default primary shooting setting) as fast as possible causes the bullets to fly out of the chamber, albeit kicking back the recoil substantially. Controlling the weapon kickback is very much possible in the right hands, making the Mini 14 a dangerous weapon to bear on the Battlegrounds.

The Mini 14 features a 20-round magazine size, which bumps up to an impressive 30 rounds with the Extended Mag attached. Paired with a Compensator and a 6 to 8x scope, you have a weapon capable of winning Chicken Dinners with ease. 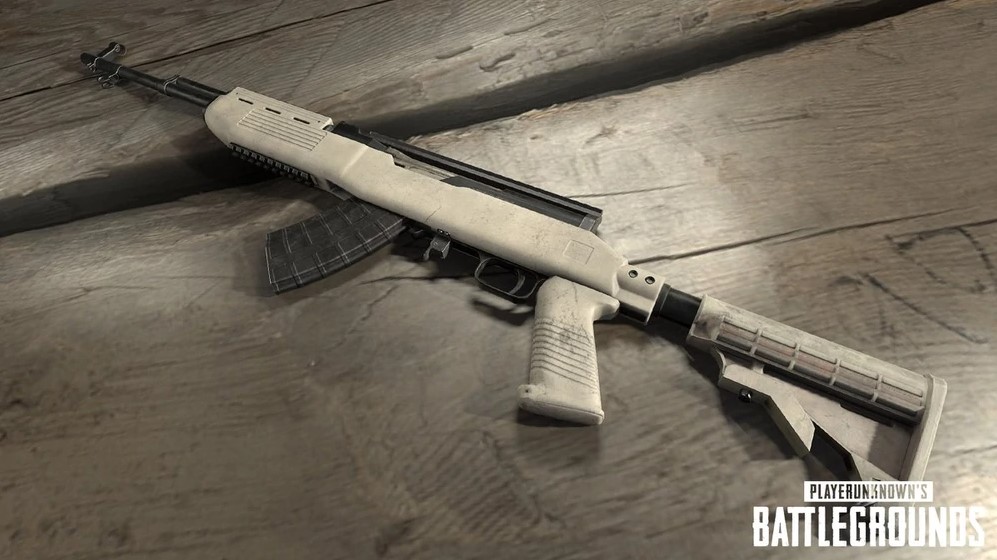 The SKS is a Carbine/DMR-type weapon in PUBG, defined as a middle ground between a typical assault rifle and a sniper rifle. The SKS excels in medium-range combat and packs impressive stopping power if a user can handle the gun effectively in close-quarter combat. It’s certainly less effective in long-combat engagements because it falls short in the precision category. Players should look to the SLR (arguably the bigger brother of the SKS) if high damage and long-range effectiveness are of utmost priority.

The SKS has the benefit of accepting the most attachments out of every DMR and Sniper Rifle in PUBG. Keep in mind, the standard magazine capacity is a mere 10 rounds (an Extended Mag bumps this up to 20), paired with high recoil and accuracy lacking in far-away encounters means users must land their shots carefully if they want to hit their target.

Still, the SKS is a capable medium-ranged DMR that can do significant damage. 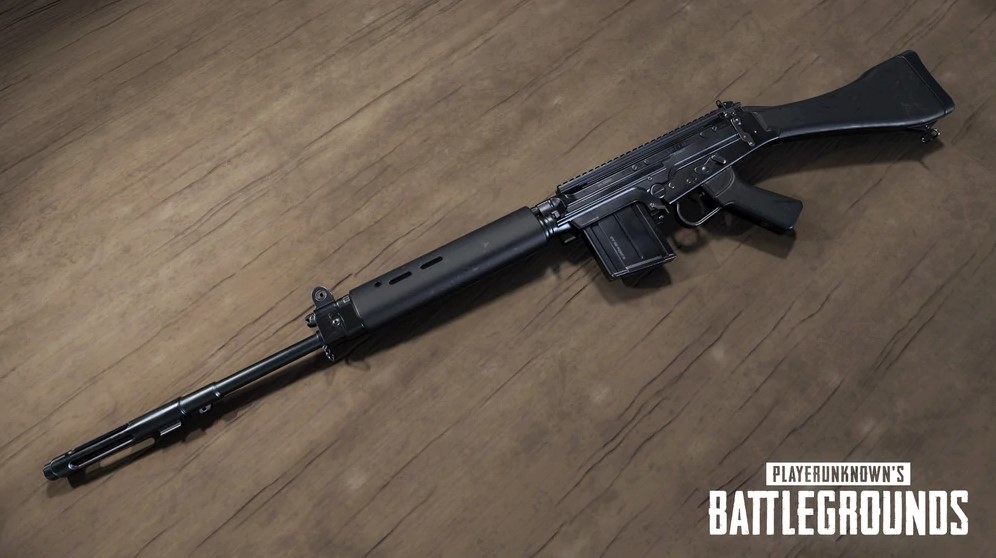 The SLR (Self Loading Rifle), is a popular DMR-type weapon in PUBG. Its 7.62mm cartridge is chambered to deliver substantial stopping power at long distances in a moderately stable and accurate package.

The SLR is seen as the more powerful version of the SKS and Mini 14, dealing more damage at the expense of more recoil. The damage can’t be overlooked with this DMR, only out-performed by the crate-exclusive MK14. With all the right attachmentsCompensator, Extended Magazine, Cheek Pad, and a sufficient Scopethe SLR is highly dangerous, as long as you know how to use it. Bigger bullets mean not as much room in the chamber, only a mere 10 rounds fit, making the Extended Magazine that much more essential whenever carrying around the SLR. A couple of well-placed shots and it’s game over for any unlucky player caught up in your crosshairs. 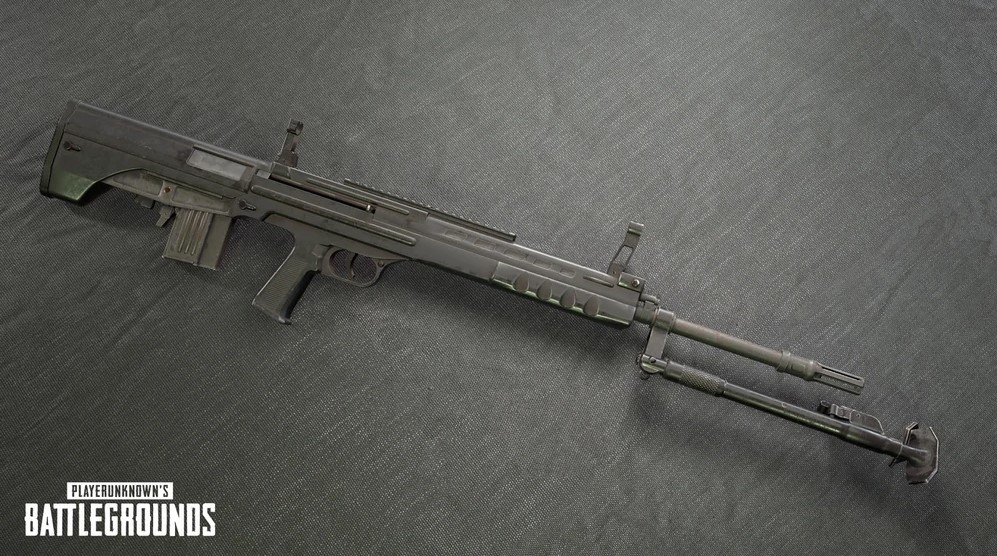 Exclusive to the Sanhok map, the QBU (or QBU-88) is a DMR-type weapon that mirrors similarities to the Mini 14.

The QBU is a Chinese bullpup designated marksman that fits the theme and location of Sanhok. The rifle features a bipod that deploys upon proning. While deployed, the bipod significantly reduces recoil when firingalthough you’re easily a sitting duck from your enemy’s point of you, unless you have sufficient cover or competent allies who can cover you. Considered a mid-range DMR, the QBU excels in these types of engagements, although anything very far away isn’t ideal.

Sharing similar qualms to the SKS, the QBU lacks in long-range engagements, dropping in precision and overall damage the further out an enemy’s position takes place. The Mini 14, SLR, and MK14 are much better candidates in these categories, further reinstating the QBU’s position as a low to medium-range rifle. It also comes stock with a 10-round magazine, making the Extended Magazine a strongly recommended piece of attachment.

A relatively new installment to the Battlegrounds, the Mk12 was released in the July 2021 12.2 update, which also featured the release of the 8×8 map Taego. At first, the Mk12 was exclusive to Taego, but is now available on all maps.

Requiring 5.56 ammunition, the Mk12 delivers hard-hitting, high-velocity firepower making it a well-rounded DMR that takes a little bit of everything from all of the other DMRs and makes it it’s own. The damage-per-second isn’t as high as the SLR, SKS, and MK14 (each uses 7.62 ammunition), though it doesn’t lag too far behind. The velocity is a particular strong point, matching the Mini 14 in regards to pumping bullets out of the chamber, so long as the user clicks their primary firing button fast enough. For a solid, well-rounded, and capable DMR, the Mk12 offers a fresh take on a popular weapon category in PUBG. 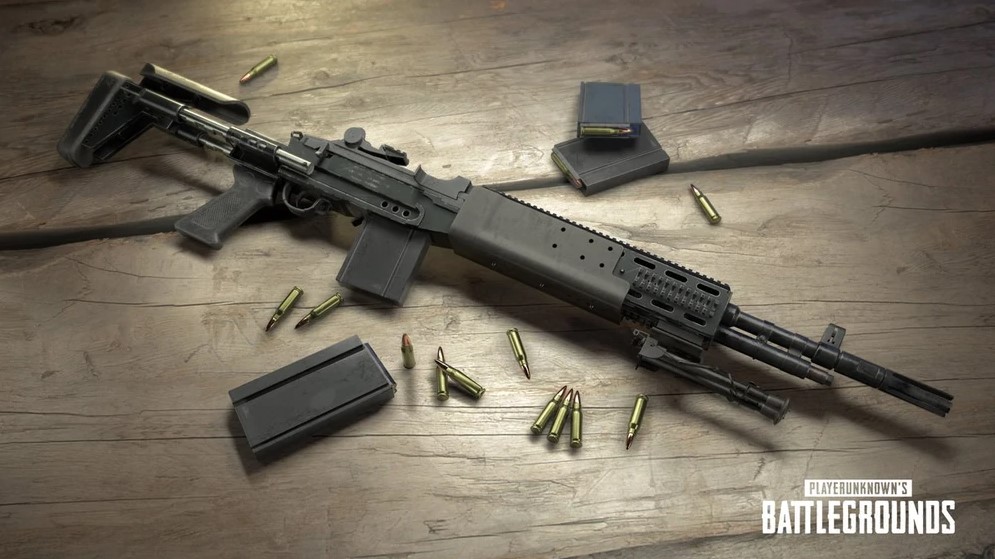 Found solely in crate drops, the MK14 is the type of gun you’ll never want to pass up in PUBG when you come across it. It’s easily the most powerful DMR, dealing the most damage per shot in its class, albeit having some of the highest recoil to boot. The MK14 truly shines in its ability to switch between semi-automatic to full-automatic with the click of a button. In an instant, the MK14 morphs into a close-range assault rifle, poised to mow down enemies unlucky enough to engage you head-on.

Because of the high recoil, Attachments are strongly recommended. The Compensator, Extended Mag, Cheek Pad, and Scope are essential MK14 attachments. In particular, the Compensator and Cheek Pad combat weapon kickback considerably well. With these additions, picking off enemies from far away or close up feels effortless. While prone, the bipod engages, reducing recoil further and assisting in delivering powerful suppressive fire wherever required.

Just make sure you’re not too exposed because firing while prone is a dangerous game.

Latest comments
No comments yet
Why not be the first to comment?
Featured news
PUBG10 days ago