A core weapon type in PUBG is the Assault Rifle or AR for short. ARs are weapons with medium-high ammo capacity and the ability to send extensive rounds downrange in a short amount of time. While they don’t have the ammo capacity of most Light Machine Guns, they make it up in impressive accuracy and damage output. ARs are a true midpoint weapon in PUBG, and the perfect weapon type to pair alongside either a DMR or Sniper Rifle.

ARs particularly shine in their versatility, rate of fire, accuracy, and strong situational relevance. If you stumble upon an enemy that’s short to medium range, you can elect to line up your shot carefully or go for a more spray-and-pray route when you’re carrying an ARthe choice is yours. ARs are ideal for storming buildings in an aggressive fashion to taking out enemies from varying distances. They’re essential pieces of hardware in PUBG for making deep runs towards those elusive Chicken Dinners. 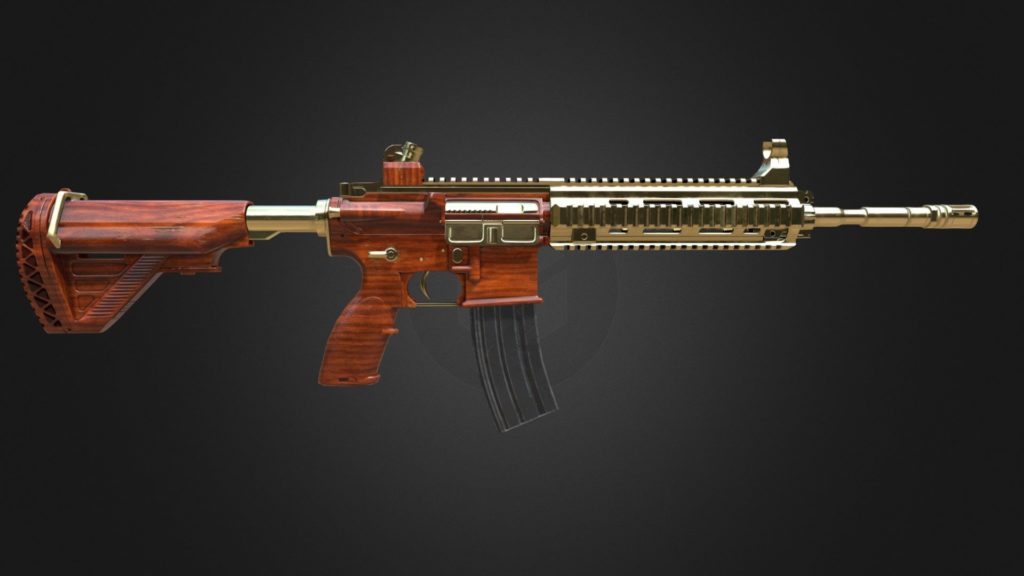 When fully kitted out with attachments, there are few situations the M416 can’t handle. It packs excellent stopping power, damage-per-second, and manageable recoileven if you’re the spraying type. It’s not uncommon to accurately spray with a 4x scope, so long as relevant attachments are utilized. That’s something you’re not going to see practiced with other Assault Rifles. The number of attachments the M416 can have is a main proponent of its popularity, allowing flexibility out on the Battlegrounds.

The M416 is best compared to the Beryl, as the two share a lot of the same characteristics. The Beryl uses 7.62 ammo instead of 5.62, resulting in more damage but increased recoil and tougher handling. Many pro players are constantly choosing between the M416 and Beryl for the best Assault Rifle in PUBG. You can’t go wrong with the M416. 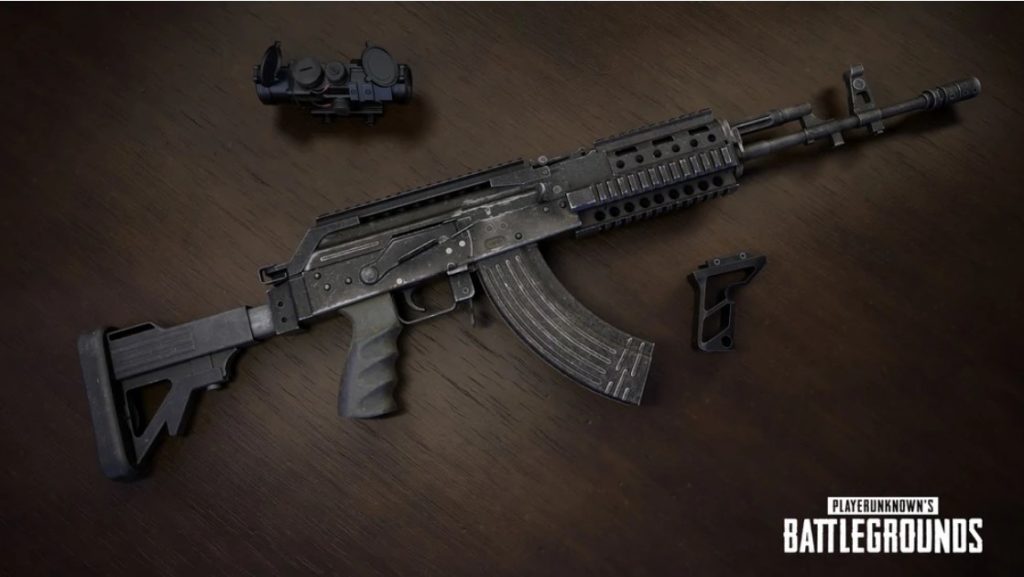 The Beryl M762 is arguably the best Assault Rifle in PUBG (consistently alongside best-of discussions with the M416), only eclipsed by the AUG, which happens to be crate-exclusive. The M762 portion of the name Beryl M762 is named after the 7.62mm caliber it’s chambered for.

The Beryl is pure versatility, boasting more attachment points than the AKM and on par with the SCAR-L and M416. Its base damage per shot is slightly lower than other 7.62mm Assault Rifles in PUBG, although that is offset by a rate of fire just about as fast as the speedy Groza (another crate exclusive weapon). So, the overall damage-per-second pumped out from the Beryl surpasses the highly comparable AKM and popular M416 with ease. The main downfall is harsh recoil, although kitting out with relevant attachments helps out significantly. Also, with the right pull-down technique and overall practice the Beryl M762 is a force to be reckoned with on the Battlegrounds. 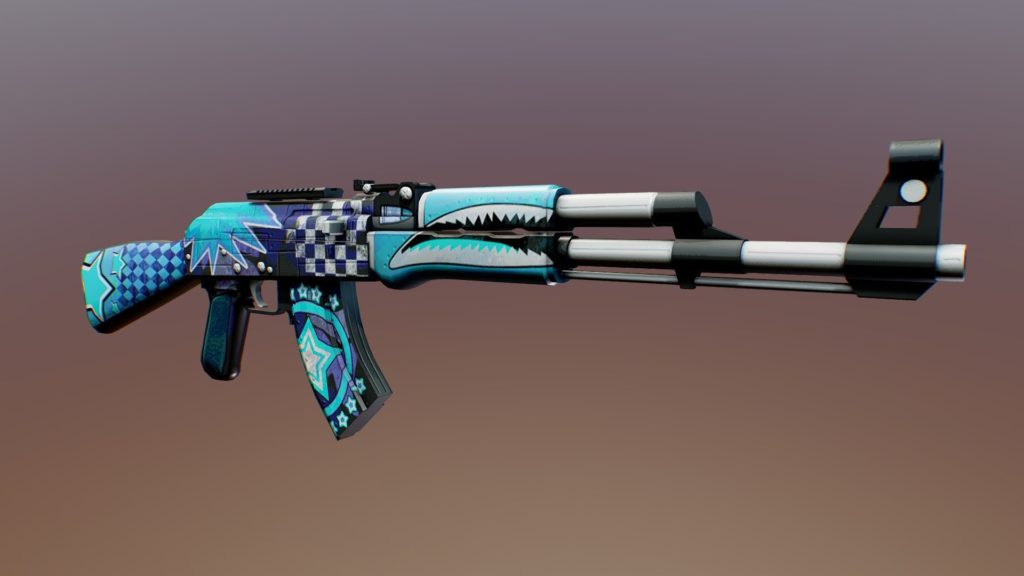 An improvised version of the original AK-47 first developed in 1959, the AKM is a powerful Assault Rifle in PUBG. Recognized as one of the most popular firearms in the world, the AKM is designed for close-quarter combat fighting, thanks to powerful stopping power unmatched by similarly-classed rifles.

The AKM demands 7.62mm ammunition, dealing more damage than 5.56mm ARs right out of the gate. One of the biggest drawbacks of the AKM is the high degree of rifle kickback during firefights. The recoil is substantially difficult to maintain, making the AKM unideal for anything further than close to medium quarter combat. Anything long-range is a recipe for disaster, especially considering the limited attachments the AKM can utilize. Utilizing the AKM for short to medium encounters is the way to go. Ensuring you land your shorts with the AKM is paramount, due to the extensive kickback and mediocre rate of fire.

Still, PUBG enemies unlucky enough to peer into AKM crosshairs only need a few registered shots before they’re out of commission. 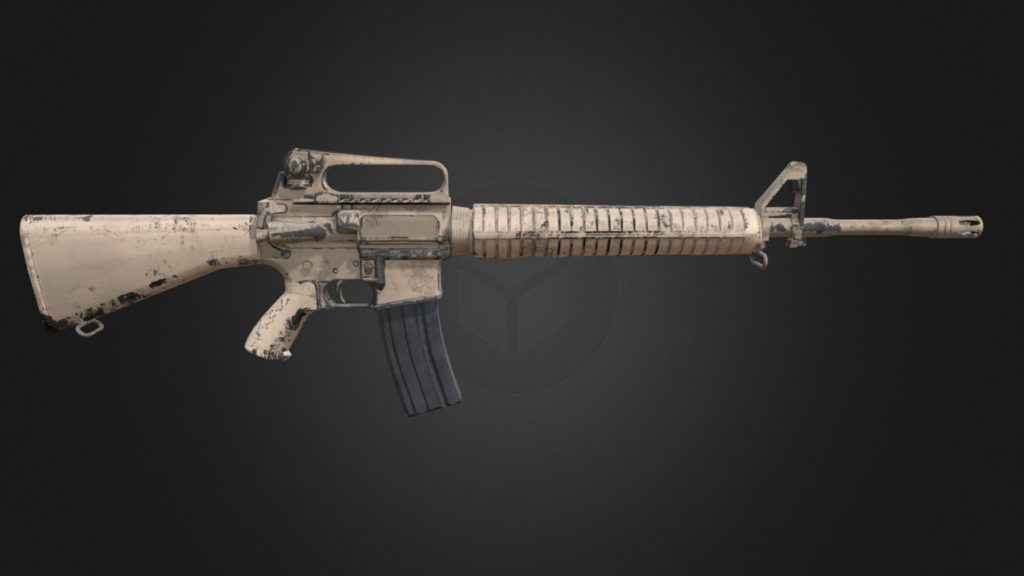 Elect between single or burst fire mode with the M16A4, although the M16A4 is best-known for firing off three-round bursts. This AR can only accept muzzle, magazine, and sight mod attachmentsno grips of any sort. The M16A4 is relatively stable, boasting minimal recoil, and excelling in close to medium ranged combat. The burst mode is particularly the shining feature of the M16A4a well-placed burst round can have devastating effects on unsuspecting enemies. It’s worth mentioning the M16A4 features some of the fastest rate of fire compared to the other assault rifles in its class. Lack of fully automatic is a major deterrent for manythe M416 is the better bet for players who can’t pass up automatic spraying goodness.

When utilized properly, users can enjoy relatively low recoil and impressive accuracy. However, because of the fast rate of fire, the recoil can kick the AR sideways, making landing targets more challenging. Still, this burst-fire assault rifle is a popular choice amongst Battleground enthusiasts. 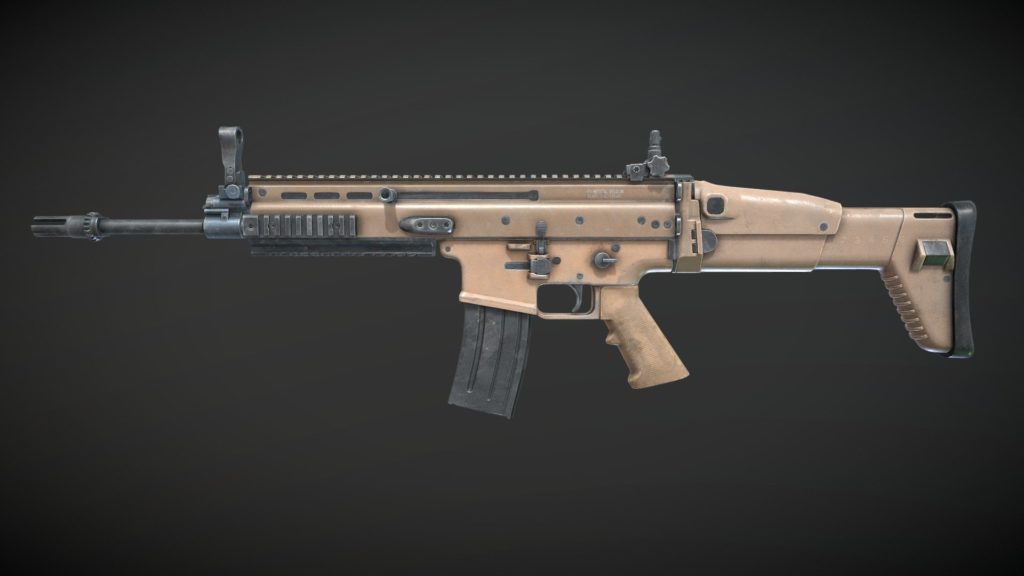 The SCAR-L proves as a well-rounded AR out in the Battlegrounds, featuring adequate stability, accuracy, and a solid rate of fire.

Due to stable firing paired with an impressive rate of fire, the SCAR-L allows for solid weapon control, capable of spraying down enemies with sound accuracy and stopping power. With the right attachments, the SCAR-L can easily pair with a 4x scope to mow down enemies with relative ease. Slowish bullet speed and decent stats across the board make for an all-around AR that’s not exceptional at one thing, but reputable across most. For most users, the SCAR-L holds up as a well-respected AR out in the Battlegrounds and a solid rifle to practice with from newer to more casual players. 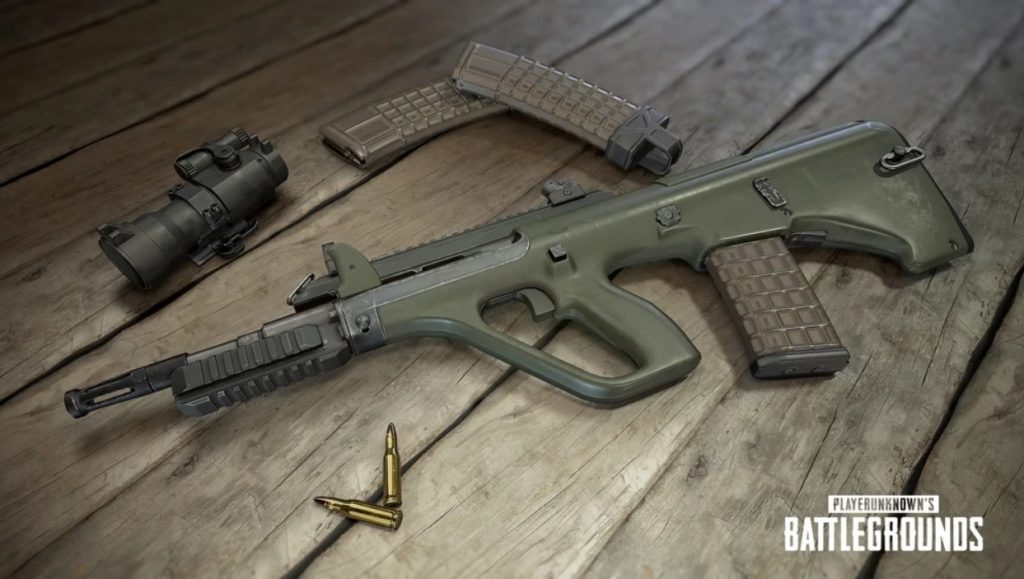 Only found in Air Drops, the AUG is the best Assault Rifle in the game. Its exceptional handling and high muzzle velocity make it a highly sought-after ARworth it for anyone daring enough to snatch up the contents of the crate it arrives in despite being under enemy fire. The AUG encapsulates the top-notch handling of the M416 and damage output of the Beryl, improving upon the minor shortcomings between each of these grade-A weapons and creating something brilliant. In short, the AUG brings the best of both worlds between these two ARs, offering a lethal crate weapon.

One drawback is the relatively slow reload speed, with makes for a tactical reload duration of 3 secondsalthough a Quickdraw Magazine can fix that. The rate of fire isn’t the fastest, which influences improved stability albeit slightly reduces its capability in close-quarters combat. In comparison, the Groza, a fellow crate weapon, features an incredibly high rate of fire built for these types of encounters. 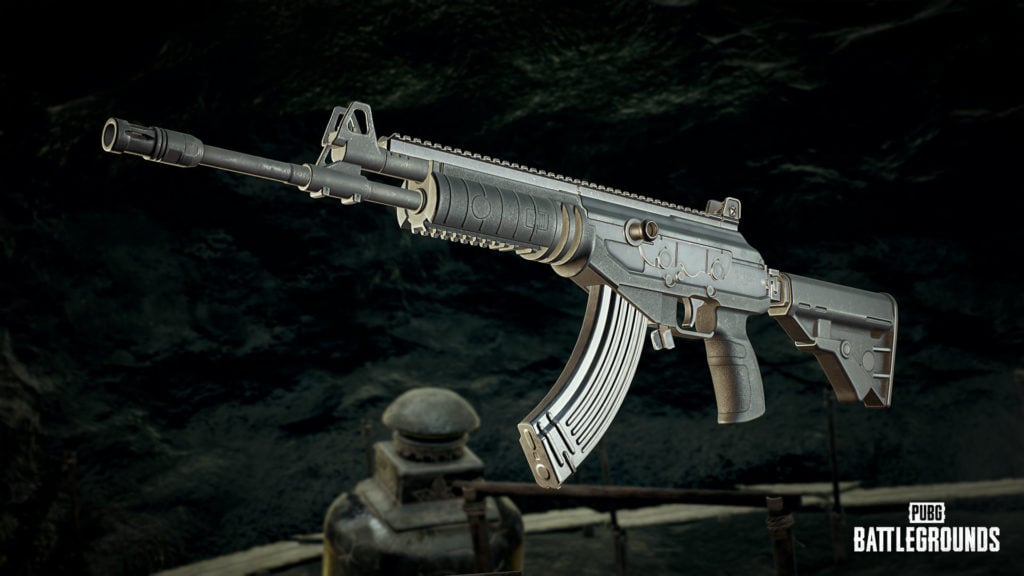 The newest PUBG AR was released in the March 2022 17.1 Update alongside the reinstatement of the old Sanhok. The Galil ACE32 slots somewhere between the M416 and Beryl, mostly feeling like a Beryl-lite. It features lighter and easier recoil, albeit less damage. For players that feel like the Beryl is too much to handle, the Galil ACE32 might just be the perfect alternative.

The Galil ACE32 displays excellent firepower and decent handling. The handling is particularly tough to control while full-auto spraying, although that’s not too surprising considering it takes 7.62mm ammunition. It also accepts every attachment, just like the M416, making this AR come to life once it’s fully decked out. There’s only a single and automatic firing mode to select fromno burst fire. For many, that means you don’t need to toggle past the burst-fire mode when transitioning from single to full-auto. We all know the pain of accidentally switching to burst fire when full-auto was intended. 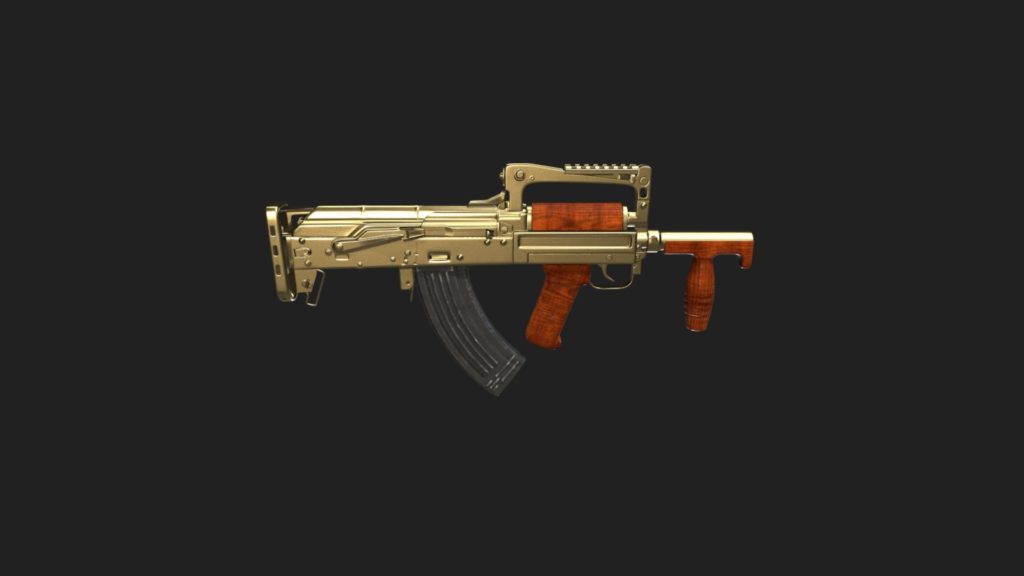 Just like the AUG A3, the Groza can only be found in Air Drops. The Groza combines the raw stopping power of 7.62mm ammo with an unforgiving rate of fire only found in small-caliber sub-machine guns like the Vector. Dealing the same damage as the AKM and boasting the second-highest rate of fire of all assault rifles (only behind the burst-fire M16A4), the Groza is lethal in close-quarter combat, easily taking care of enemies with a well-lined up spray.

Medium to far away encounters is less than ideal for the Groza, especially considering its inability to accept foregrips of any kind. The reload-time is a considerable drawback, taking a full 3 seconds to fully swap out the clipbut that’s nothing a QuickDraw Magazine can’t fix.

Still, if you find yourself in the final few PUBG circles in close-quarter or tight firefights, you’ll wish that you had the Groza by your side.

Latest comments
No comments yet
Why not be the first to comment?
Featured news
PUBG11 days ago