Returning to competitive Teamfight Tactics after having a baby and mostly sitting out on Set Six, Socks put the North American players on notice with a win at the Set Seven Astral Cup.

Taking place over the course of two weekends and four days, the TFT NA Astral Cup defined the 12.12 B-patch meta while advancing four players to the Mid-Set Finale.

Unlike the EMEA Golden Spatula Cup, which wrapped earlier today, winning the Astral Cup did not guarantee Socks a direct invite to the NA Dragonlands Regional Finals. All players earned qualifier points toward a potential Regional Finals invite and the top four automatically advance to the Mid-Set Finale that’s scheduled to take place from Aug. 19 to 21.

A total of 32 players competed on the fourth and final day of the TFT Set Seven Astral Cup, competing over the course of five games. Only the top eight highest-scoring players from day four advanced to the playoffs, playing an additional two games to determine a winner.

Milala went into game six sitting atop the leaderboard but fell hard with back-to-back eighth-place finishes. Aesah and Socks were gunning for the Astral Cup title heading into game seven, separated by one point heading into the final game of the day, after Aesah took a first with a Double Trouble Built Different Volibear Corki comp. 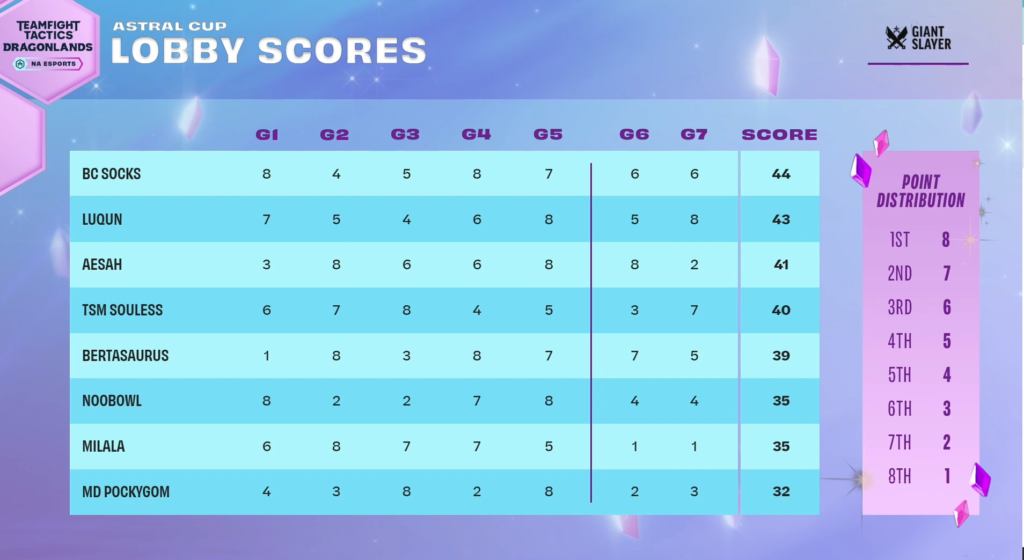 Image via Wisdom and Riot Games

Attempting to go in the direction of Corki again, Aesah dropped out of game seven in seventh place to finish third overall at the Astral Cup. Socks started game seven with only one item and 20 gold, turning it into a third-place lobby finish with three-star Swain Dragonmancer. And winning the final game of the day was Luquin with Ao Shin, but it wasn’t enough to dethrone Socks.

A first-place finish by Socks at the Astral Cup earned him a seat at the Mid-Set Finale, along with Luquin, Aesah, and TSM Souless.

Latest comments
No comments yet
Why not be the first to comment?
Featured news
Teamfight Tactics10 days ago