When the sequel's early access launches Oct. 4, fans will enjoy a new "seasonal" model, Competitive 2.0, and more content than ever.

For years, Overwatch 2 has been teased by developers as a better, bolder addition to a beloved base game. And after a massive reveal event, that promise is looking more possible than ever.

The developers announced today that Overwatch 2 will include a battle pass and an in-game shop when it launches in early access on Oct. 4, joining the legions of first-person shooters using the successful, easy-entry business model.

More importantly for longtime Overwatch fans tired of dealing with extended content droughts, the games development team laid out a definitive roadmap for content over the next year and a half. Short seasons with guaranteed new contentand new heroes added to the roster every few monthsshould placate even the most cynical of fans.

From the very start, Overwatch was designed to be a social experience, game director Aaron Keller said in the June 16 reveal video. We know our fans are having the most fun when theyre playing with their friends or meeting new ones. The move to free-to-play makes it easier for everyone to just drop in.

Overwatch 2 will introduce a battle pass model to the game when it launches that includes basic (free) and premium content, according to work-in-progress screengrabs shown in the June 16 video. Each battle pass will last for nine weeks, the length of the new seasons in Overwatch 2. An in-game store with cosmetics will also come to the sequel.

While much of the games premium content hasnt been revealed, the devs did show off the addition of Mythic skins for Overwatch 2. These skins offer a customizable experience for players; certain parts can be switched around to create your perfect look. Genji will receive the first Mythic skin on Oct. 4, a demonic look with glowing tattoos. 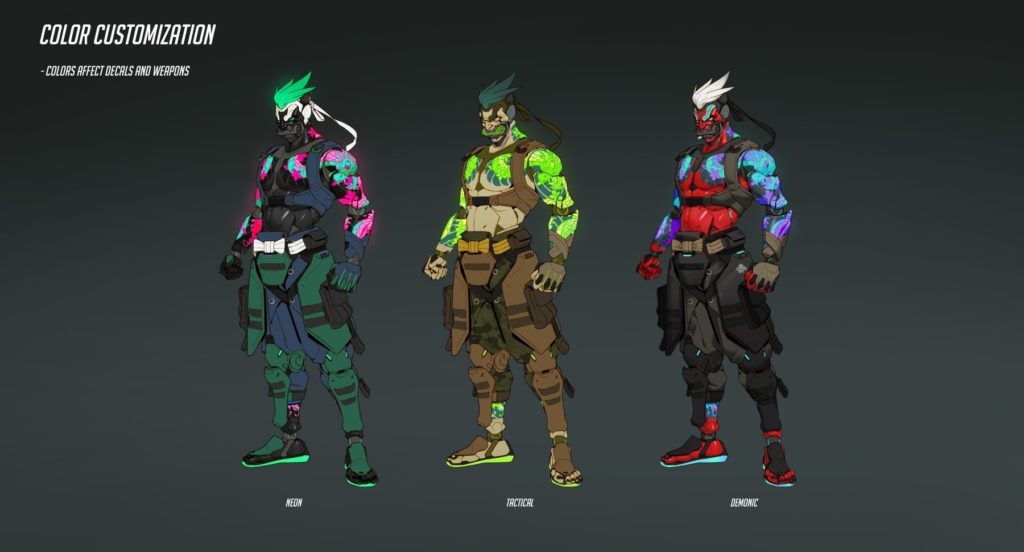 One of the biggest complaints from Overwatch fans has been the lack of consistent, predictable content added to the game. To counter that for the sequel, the devs have committed to a content calendar.

In Overwatch 2, the game will move to a seasonal model. Each season will last nine weeks and a new hero is guaranteed to be released every other season. Each season will include over 30 new cosmetics, new maps, a new battle pass, and a new Mythic skin, according to the roadmap provided by the developers. 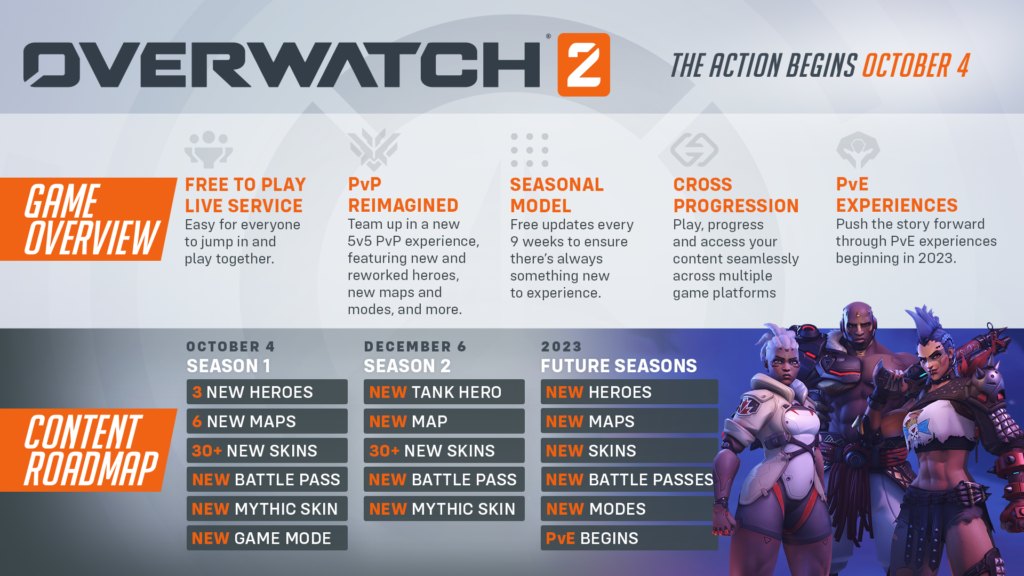 Part of the seasonal model is the evolution of the Competitive experience, a mode notably missing from the Overwatch 2 beta.

In the base game, seasons of Competitive mode last two months, and players rely on a numerical skill rating (SR) to determine their rank, which ranges from Bronze to Grandmaster (and a special Top 500 rank in each region).

The sequel will introduce multiple tiers within each rank. Instead of simply lingering in Gold forever, you could progress from Gold One to Gold Two, for example. Progression will no longer fluctuate after every match, either.

What we want is for people to progress through these ranks, Keller said in a press conference. To do that, rather than moving up or down in rank after every match you play, after you win seven matches, your rank will get updated.

Competitive 2.0 will also include after-match reports to help players improve and provide more information about their performance. Match history will also be available at a much more detailed level than it was in the base game.

The June 16 reveal video and provided content roadmap confirmed that three new heroes will be available when Overwatch 2 launches on Oct. 4. This includes Sojourn, who headlined the first beta experience, and Junker Queen, a new tank that will be a part of the next June 28 beta test.

A third hero is confirmed to be a support, but few details were provided in the reveal video or press conferences. Theres a good chance, however, that this addition is related to the blue fox seen in the June 12 teaser. Another tank will be introduced with the December season.

Maps on deck include Rio de Janeiro, a Hybrid map that has been teased for Overwatch 2 since the original 2019 BlizzCon announcement. Another previously-unannounced map addition is Portugal, a new Push map with cobblestone streets and stone-covered castles.

The reveal video also showed brief shots of more content players can expect, like an updated nighttime Nepal map and an emote of Junkrat presenting his enemies with GG on a platter.

While details about specific dates or timelines were sparse, the developers confirmed that player-vs-environment (PvE) contentor Overwatch 2s long-awaited story modewill be headed to the game sometime in 2023. We got brief glimpses of possible missions, including a trip through Torbjӧrns hometown of Gothenburg and an arctic jaunt with enemies barely visible through a snowstorm.

More information about content and specifics about the sequels launch will be revealed as we get closer to that Oct. 4 launch date.

How to fix the Overwatch 2: Watchpoint Pack beta access not working