Bat-tle royale: Vantage, Apex’s first sniper legend, joins the Games with a pet and a purpose

Vantage will use everything she’s learned when she steps into the arena.

The icy, barren wastelands of Apex Legends planet of Págos are an inhospitable landscape, and surviving in them is an ordeal on its own. But for Xiomara Mara Contreraswho fans of the hero shooter will come to know as Vantagethe deadliest part of Págos wasnt the climate or the wildlife. The danger was in the remains of an old ship called the G.D.S. Vantage, where she unearthed an old secretand almost died for it.

Maras mother, Xenia, taught her the only rule in Págos was survival. Mara became the ultimate survivalist, a hunter and scavenger who learned to live with whatever she could get her hands on. And that skillset will come in handy where shes going next.

Mara joins the Apex Games as Vantage, the season 14 legend, and shes bringing a pet bat under her scarf and a series of superlatives under her belt. Shes the first legend to have her pet as part of her kit, the first outright sniper-focused legend, and the youngest character on the roster so far. Apex is breaking new ground with Vantage, molding a backstory into a fresh and unique gameplay kit while navigating the pitfalls that may arise from her specialized playstyle as a sniper.

Vantages story actually starts with her mom, senior writer Kevin Lee said in a press conference ahead of season 14. Her mother, Xenia, was wrongfully convicted and imprisoned aboard the G.D.S. Vantage but found a fresh start for herself and her unborn daughter after the ship crashed. Xenia was imprisoned again after Survivea small price to pay for her daughters survivaland Vantage joined the Apex Games to raise awareness of her mothers wrongful conviction.

Growing up outside of civilization, Mara doesnt really understand (or care about) social cues or rules, Lee said. Being social has never mattered for the main aspect of her life: survival. Dont expect her to act like a hermit living in a cave, however. She brims with youthful energy and confidence, according to Lee, and is actually incredibly smart, perceptive, and capablefar beyond what her young age might lead her opponents to believe.

At first glance, though, Vantages liveliness hides behind the anachronism that shines through her visual design. Theres a stark juxtaposition between her youth and her bulky, obsolete gear, which sometimes looks older than Mara herself and instills a rugged severity into the nimble 18-year-old. Vantages outfit and even her sniper rifle feel like an older version of Apex, concept artist Rachel Gagner explains, mixing the makeshift and the outmoded to highlight the time gap between the Vantages crash and present-day Apex.

The Sniper Savants weapon of choice is no different. Vantage wields a modified older-model Sentinel, which appears as her ultimate. She doesnt need a full ult charge to whip out her marksman rifle, but more charge means more shots at her disposal. And though it doesnt pack a punch like the Kraber or even the Sentinel, its utility comes in other forms.

The team experimented with a series of iterations for Vantage, legend designer and engineer Chris Winder said. Her signature rifle started out as a Kraber-like, hard-hitting juggernaut, but enemies could use some mechanics and communication to avoid or mitigate its impact. The team then swung the other way, putting more of an emphasis on sheer debuffing over damage, though that didnt quite hit the sniper fantasy they concocted for Vantage.

Respawn settled on a mix of both, leaning into intelligence-gathering and team utility that are intrinsic to her Recon class. One shot of Vantages sniper will deal 50 damage but will also debuff enemies, and mark enemies with a diamond icon over their heads. Teammates will deal increased damage to marked enemies and a subsequent shot of her sniper will deal 100 damageenough to make a wounded enemy think twice before peeking a corner. 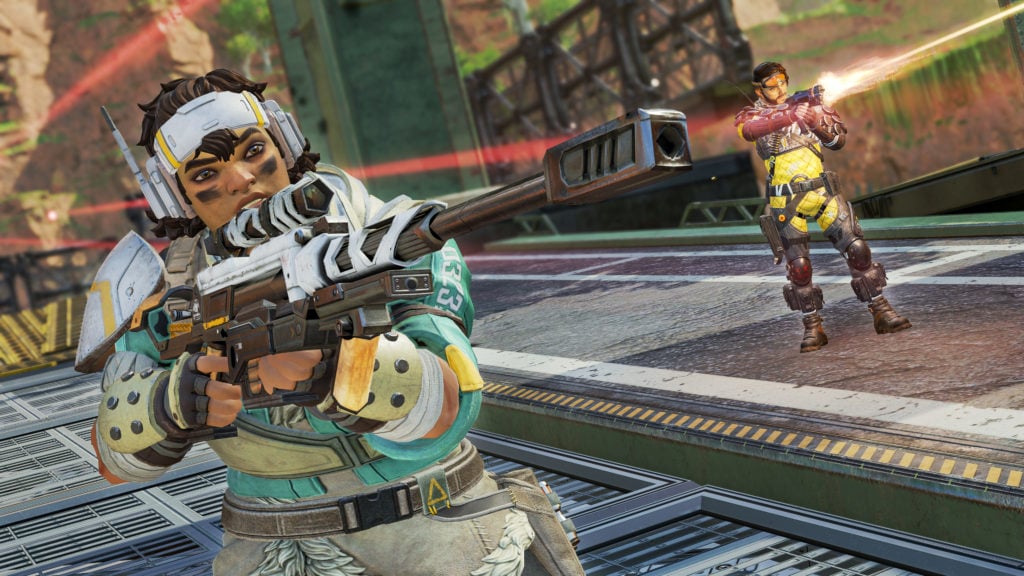 Her passive also leans on her scouting angle. Thanks to her modified scope, Vantage can see vital information on opponents, like an enemys shield level and how many living members that team has. The team prototyped this as her tactical with the potential to scan foes but toned it down to her passive after one big a-ha moment created a handy tactical and brought Vantages kit more in line with the live versions.

With such a penchant for sniping, Vantage was prone to the pitfalls that come with Apexs long-range engagements. Hanging back usually means you can get very separated from your team and it can be hard to capitalize on that long-range damage that you just did, Winder said. So the team enlisted a certain winged companion to bridge that gapthough early iterations had a bird instead of a bat.

Echo, the bat, is more than Vantages lovable sidekick. The sniper can deploy Echo in the environment as her tactical, then fly to his position with the help of her modified jetpack. This gives her an avenue for mobility and creative play, which are invaluable tools in Apex. That movement, however, comes with its sound cues and isnt designed to be used as a dive in your face tool, according to Winder. Echo will also fly around an area, which enemies can use as a hint of possible trouble.

Echo is hardly the first companion in Apex; theres a raven, a rat, a healing drone, a robot that turns into a miniature black hole, a surveillance drone, and even an honorable mention to the prowler in the season 11 lobby. But he is the first living pet to actually aid a legend in the Games. Echo is essential to both Vantages story and her kit, and fans will see plenty of the lovable bat in the game.

Vantages visual design embraces and develops the kinship between her and Echo. He nestles in Vantages scarf and the sniper calls Echo with the same whistle she used to communicate with her mother. All of those were integral in the visual storytelling of the relationship and how theyve grown together, Gagner said, and all of them are part of the details that make the Apex cast so compelling.

To embrace that role, however, Echo needed the range to fluctuate between the delightful and the feral, according to Gagner. Despite how adorable he may look, hes also a wild animal, and hell use that ferocity to help Vantage in the Apex Games. That doesnt exclude him from being adorable, thoughand if the official Nessie plushes are any indication, the fight for a (yet unconfirmed) Echo plushie could be deadlier than the skirmishes in Skull Town.

From the icy wastelands of Págos to the frozen plains of Worlds Edge, Vantage will have her work cut out for her when she joins the Apex Games. Luckily for her, though, shes had 18 years to practicethough surviving the Outlands most infamous bloodsport may prove to be Maras biggest ordeal yet.

Latest comments
No comments yet
Why not be the first to comment?
Featured news
Apex Legendsa day ago