Catalyst is one of Apex's many firsts.

Tressa Crystal Smith hasnt exactly had an easy life. She lived through a crumbling Boreas after a meteor hit the planets moon, had some turbulent teenage years (with a gender transition in that time), and lost one of the people closest to her after her friend Margo bombed a facility in Boreas to save its moon. Stepping into the Apex Games isnt going to be easy either, but she’s more than ready to take on that challenge and become Catalyst, the 15th legend to join the cast of Apex Legends.

After her closest friend Margo was taken prisoner, Tressa fled Boreas, setting up shop on its moon Cleo as part of a terraforming crew dedicated to preserving its environment. In the colony of Hope, Tressa learned to manipulate ferrofluida substance the crews used to change the structure of Cleo and is present on the surface of the moona talent shed later take into the Apex Games.

With the Outlands most famous bloodsport moving to Cleo with its new map, Broken Moon, Catalyst is joining the fight to help save the place she called home. Her role in the Apex narrative is far bigger than just her story, however. With her release, Respawn Entertainment is shedding light on what happened in Boreas since the meteor hit Cleo, pulling Duardo Silva and Seer back into the spotlight, and possibly even tying up a loose end from season six, all while giving life to a unique legenda techno witch, as Respawn staff called her, a narrative foil to Seer, and the games first trans woman.

The techno witch moniker is precisely what got the teams creative juices flowing with Catalyst according to lead writer Ashley Reed, an exciting concept that fits Catalyst perfectly. Though the magic aspect is alluring, it was important to have a scientific explanation for her abilities, since science plays a vital role in the futuristic universe of Apex and Titanfall. The goal was to hit tech and witch equally with her look, Reed said, and the team struck that mark by making the two elements an important part of her character.

The witch part is easy to spot through Catalysts theatrics when manipulating ferrofluid in a way that almost looks like magic, as well as through her fondness for crystals and moon rituals and even in her outfit and makeup. Catalyst likes crystals more than she likes most people, according to her bio, and Reed said even though she tries to crack jokes with the other legends, her jokes tend to fall flat. 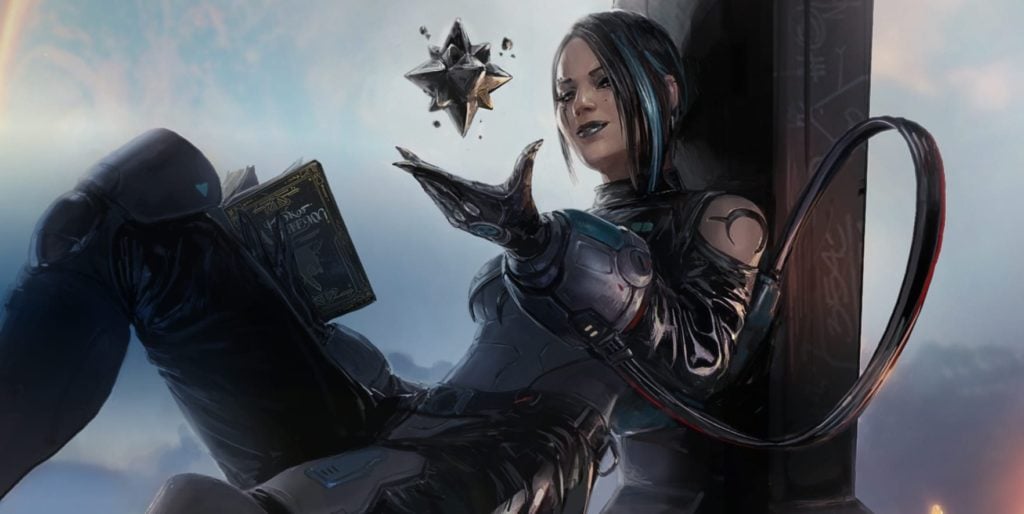 Shes too introverted and goth-y to be an eternal joker like Mirage, but she is what Reed calls a big sister type whos dedicated to protecting those close to her. In the Apex Games, this includes her squad, since she feels shes responsible for them. And though it may seem Tressa will be out of place in the Apex Games, she still knows what shes doing when she steps into a fightand shell use her abilities to protect her teammates and take home the prize in the Apex Games.

The tech part may feel less majestic or alluring, but its an equally important part of her concept. Catalyst has a backpack full of ferrofluid, which she controls with magnets woven into her gloves. To use ferrofluid effectively in the Games, she tweaked her old work outfit and gave it some personal pizazz, according to Reed, though you can still spot the ferrofluid hoses and splash guards, which lend an industrial quality to Catalysts look. Though theres a reasonable explanation for her abilities, it doesnt mean she’ll stop using them with magic and majesty.

More than being the 15th legend, however, Catalyst is also the first trans woman to join the cast of Apexa fact Respawn made abundantly clear since her debut. In her Stories from the Outlands lore cinematic, she mentions her transition. Her bio also states she had a gender transition, which left little doubt about her gender identity.

Respawn wanted to make Catalyst inescapably trans, according to an interview by GamesRadars Alyssa Mercante. The team worked hard to lend Catalysts portrayal elements that reflect the lived experiences of a contemporary trans woman, Mercante writes, and the techno witch moniker also came from a trans employee. Respawn worked with its own trans employees, as well as the Gay & Lesbian Alliance Against Defamation (GLAAD) and Catalysts voice actor, Meli Grantwhos also a trans womanto ensure her representation was faithful. “Catalyst represents a certain type of trans character who is out and proud and is proud of her trans identity, GLAAD associate director of gaming Blair Durkee told GamesRadar.

Catalyst has already made a splash in the Apex community, whether due to her impressive backstory, unique look, or just because her kit promises to deny enemy scans in a scan-heavy meta. But her story is also inextricably tied to Broken Moon, and the pivot toward Cleo and Catalyst presents an important opportunity to evolve the lore and the narrative in the Apex universe.

The Games reached Cleo due to an agreement with Duardo Silva, the One Voice of the Syndicate and arguably the Outlands closest equivalent to a megalomaniac Batman villain. Duardo paid the Cleo Recovery Council to host the Apex Games on the Boreas moon with the endorsement of Seer after fictional hostess Lisa Stone pressured him to take more action about Boreas in a live interview. Hosting the bloodsport would allow the terraforming efforts to continue, but not without being put on hold for some time while the Games runand Catalyst isnt exactly thrilled about it.

With Catalysts arrival, the spotlight in the narrative is bound to pivot to that new dynamic, shaking up the storylines and possibly adding new connections (and new secrets) to the mix. Not only does her introduction shed light on what happened in Boreas in the 26 years since Seers birth, it also opens up more room to elaborate on the dynamic between the two legendswith the ever-present opening for Silvas megalomaniac plans for the Syndicate to wreak havoc on the Outlands. Add to that the prevalent theory that Margo is Big Sister, the crime boss from Ramparts Stories from the Outlands, and Catalysts arrival brings plenty of promise to the Apex narrative before she even steps into the arena.

Catalysts arrival can answer a few overarching questions in the lore, but Tressa brings far more questions than she answers. The techno witch is also a valuable addition to the game: an unexplored, alluring concept that aims for meaningful trans representation in an important piece of media.

And when she does set foot in the Apex Games, you dont want to get in her way.