Apex Legends is getting scarier than usualmostly due to the presence of another Revenant in the Shadow Realm thanks to the Fright or Fright event, which kicked off today and will run until Nov. 1, marking the longest event in the game so far.

Fight or Fright is Apex’s Halloween-themed event and has been taking place in October since the shooter’s debut in 2019. This year, the festivities will go on for four weeks, and each week brings a limited-time mode to the mix.

The Halloween-themed Shadow Royale is back to the fray, this time taking place on a nighttime version of Olympus. The mode will be the first in rotation and will be available between Oct. 4 to 11, but will also return later in the month. In the mode, players who die become shadow versions of the legends that can’t use weapons but can respawn indefinitely, wall run, and deal increased melee damage. Squads are in the fight as long as one member of the team is alive.

Following Shadow Royale, players can participate in Gun Run between Oct. 11 and 18. Gun Run was introduced in the Beast of Prey event, which ended on Oct. 4the same day Fight or Fright began. The mode is Apex‘s take on the established Gun Game mode, which makes players battle through a gauntlet of weapons, advancing (and getting a new weapon) with each kill.

For the third week of the event, players can expect the Battlefield-esque Control limited-time mode to make an appearance between Oct. 18 and 25. In this mode, two teams of nine (made up of three squads of three legends) fight to control specific points on the map. This time, the modes will take place on Lava Siphon (World’s Edge), Barometer (Storm Point), and Hammond Labs (Olympus), with the latter taking place on a nighttime version of the floating city.

Shadow Royale returns to the rotation for the last week of the event, giving players another go at the Halloween-themed mode before it disappears.

In addition to the four-week limited-time mode bonanza, players can also encounter new skins for this year’s version of the event, including cosmetics for Ash, Seer, Octane, and Wattson. 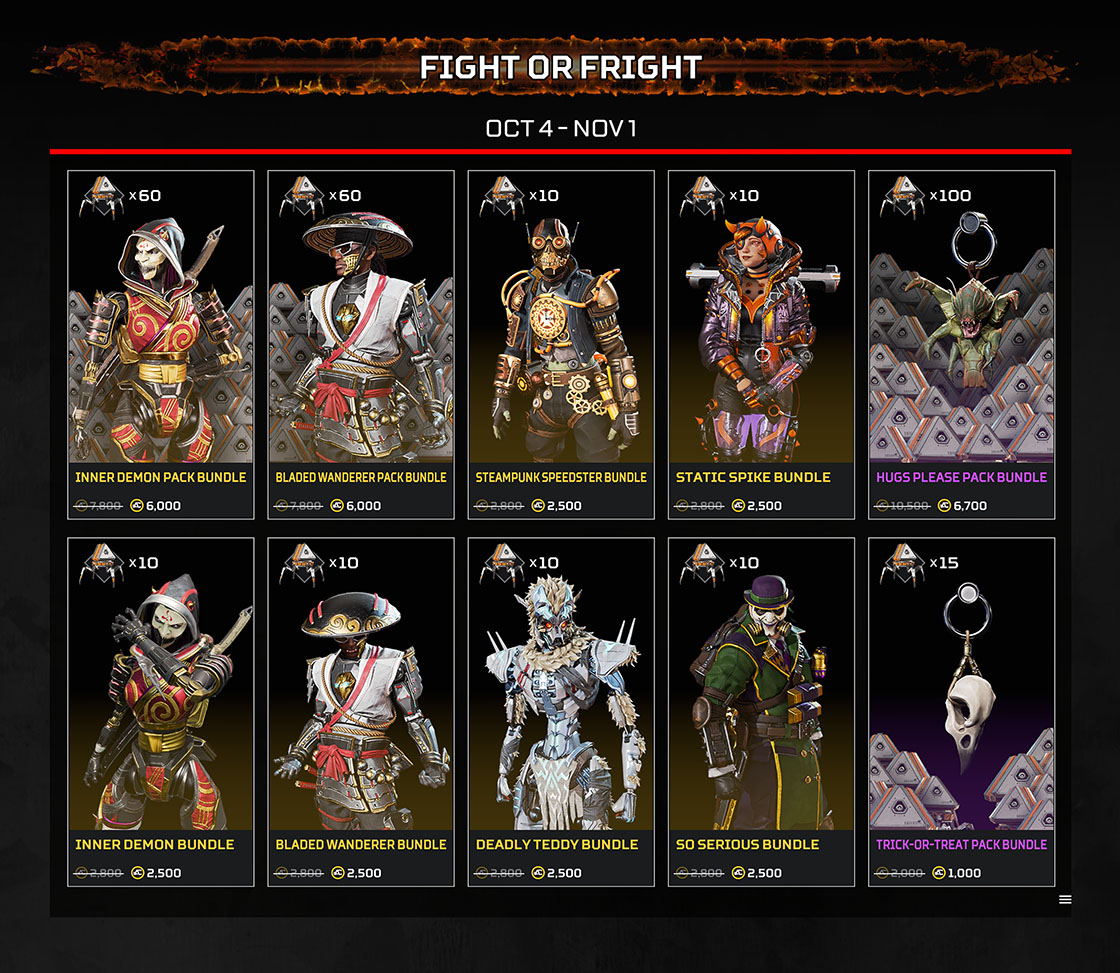 In addition, two coveted skins will return throughout the event. Wraith’s Voidwalker cosmetic will be available in the shop between Oct. 4 and 11, with a few bundles alongside it. This is one of the most popular Wraith skins due to its uniqueness and significance: it’s based on the Voidwalker short, which debuted in September 2019.

The week after that, however, players can see another skin based on an episode of Stories from the Outlands in the in-game shop. Pathfinder’s Memoir Noir will be available for purchase between Oct. 11 and 18, with a few unique bundles of its own.

Fight or Fright 2022 runs until Nov. 1, giving players a little under a month to enjoy everything the event offersincluding the return of Control and the new Olympus After Dark.