With the promise of another Duos event later.

The Year of the Rabbit is coming to Apex Legends as part of the game’s Lunar New Year celebrations. The Celestial Sunrise event launches on Jan. 24 and will bring the Hardcore Royale limited-time mode (LTM), a new collection, and some free rewards, according to a blog post from today.

The Hardcore Royale mode is the star of the new event. The mode is a more punishing take on the battle royale trios that’s at the core of Apex, bringing a few restrictive twists. The HUD will be limited, according to Respawn, and players will be more vulnerable than ever thanks to the changes in armor.

Hardcore Royale will only spawn White armor for all players, and all helmets will be removed from the mode. Players can’t evolve, upgrade, or even swap armor with fallen enemiestheir death boxes won’t contain any armorso they’re mostly stuck scavenging healing items. As an extra layer of lethality, the Ring will already start doing max damage, so don’t get caught in it or you may go back to the lobby faster than you anticipate.

Hardcore Royale isn’t a takeover, though, and players can still engage in the normal version of Apex if they want to. The new LTM is also only available for accounts level 20 or higher, just like the competitive mode.

In addition to the new Hardcore Royale LTM, players have a new 24-item collection inspired by the Lunar New Year ahead of them. The blog post shows Legendaries for Caustic, Octane, Ash, and Pathfinder, with matching skins for the Devotion, Volt, Wingman, and Hemlok, though that’s just a fraction of the offerings. The items will be available for Apex Coins or Crafting Metals.

Players who acquire all 24 items will get the Jadeite Retribution Peacekeeper skin as a bonus. It’s unclear how the Peacekeeper skin will be unlocked after the event ends, however, or if it will even be available.

Lastly, the store is also reprising some cosmetics, including Wraith’s Protector of the Void and Void Prowler, as well as older event skins for other legends. If you don’t want to spend your hard-earned resources on cosmetics, though, you can also obtain a few free items by playing through the event rewards track. Up to 1,600 points are up for grabs each day, and challenges refresh daily. 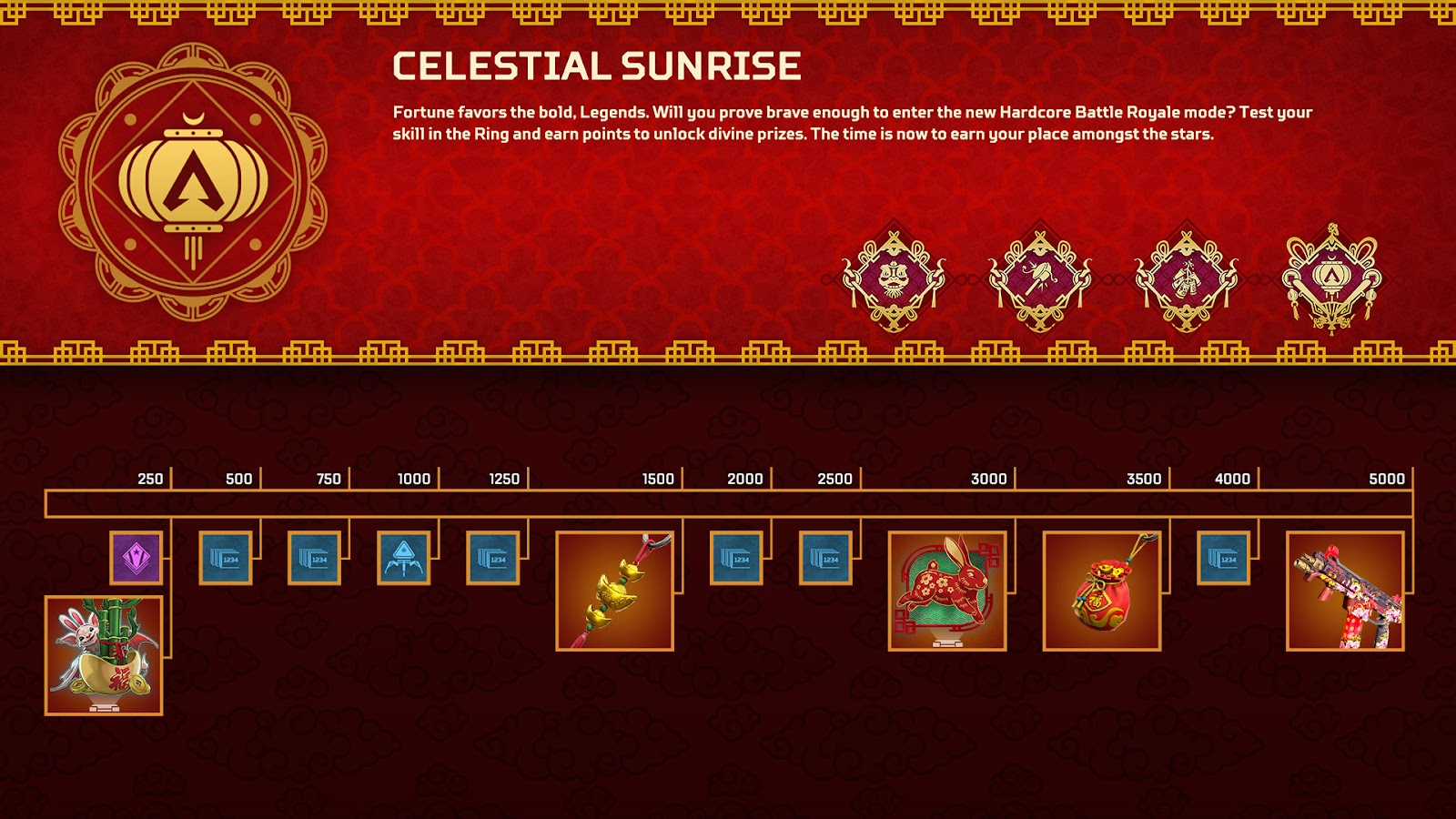 The Celestial Retribution event runs until Feb. 7, shortly after Apex‘s fourth birthday. Once the event ends, however, players can also participate in the Date Night LTM, a romantic take on the death and destruction that comes with the base Apex gameplay.

“Date Night includes a new healing mechanic exclusive to the takeover. Using any healing item will show an area around your Legend,” the blog post reads. “If your Duos partner is in the area when you finish the heal, theyll also receive the effects of the item!” The limited-time mode will also bring the Heart Stealer, a modified Bocek bow that heals you (and your partner nearby) by a percentage of the damage dealt.

The upcoming Date Night LTM isn’t the first time the battle royale has celebrated Valentine’s Day, with minor events in 2019 (just days after the game launched) and 2020.

Characters from Apex Mobile aren’t coming to Apex—at least, not yet

For the first time since launch, Apex isn’t getting a new legend next season

Apex is removing Arenas, but getting a new LTM playlist in its place