A year into competitive play, Amde earns a seat at Worlds.

The final eight North American players at the Dragonlands Set Seven Mid-Set Finale battled for slots at Regionals and Worlds, with Amde earning the first direct invite to the Teamfight Tactics World Championship.

Taking place over the course of three days, 32 North American players competed at the final Set Seven tournament, seeking invites to the Regional Finals in Set 7.5 and a direct invite to Worlds. Played in Patch 12.15, winning comps included Corki, Daeja, and Shi Oh Yu while some players crafted comps outside the norm. But the final day at the Dragonlands Mid-Set Finale was all about first or eighth.

Amde came into the third day of the Mid-Set Finale with three bonus points after finishing at the top of the leaderboard during day two. He also only had one eighth-place finish throughout the entire tournament (18 games). Amde had just missed the top eight at the Jade Cup during set Seven and had similar results during the Astral Cup. 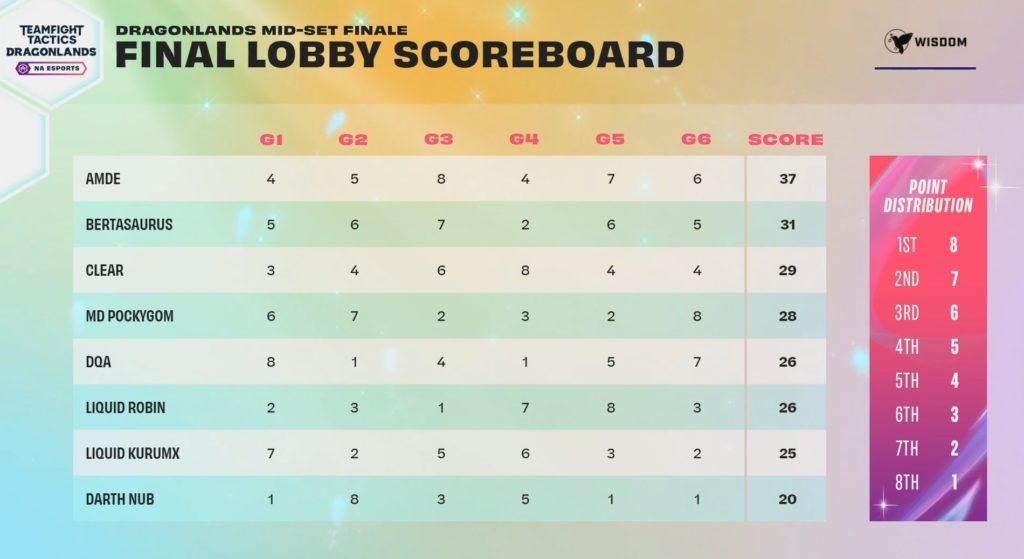 Image via Wisdom and Riot Games

Day three started out rough for Amde with a fifth, but he never finished lower than that throughout the remaining five games, putting into effect that consistent playstyle Amde had showcased throughout Set Seven. After finishing third in game six, Amde didn’t even need the bonus points to win the Mid-Set Finale, earning a direct invite to the Dragonlands TFT World Championship.

Players who finished second to fourth on the final day of the Dragonlands Mid-Set Finale also walked away with guaranteed invites to play at the Set 7.5 Regional Finals.

Latest comments
No comments yet
Why not be the first to comment?
Featured news
Teamfight Tactics14 days ago