The biggest stage in Apex returns this fall.

EA announced details on year three of the ALGS today, which is set to return in early October. The top professional circuit in Apex Legends esports will include a $5 million prize pool, three international LAN events, and some changes to the format from year two of competition.

In-person tournaments will be played for the Split One playoffs in winter 2023, the Split Two playoffs in the spring, and the ALGS Championship next summer. Information on the location of these LAN tournaments is not yet available.

While the general outline of the ALGS remains the same, with two Pro League splits capped by playoffs, some changes are coming to the format of the circuit. The size of each regions Pro League has been reduced to 30 teams to ensure the highest level of competition in this division. Year two had 40 teams competing in each region. These 30 teams will be comprised of 22 squads that receive direct invitations and eight who make the cut from a preliminary preseason qualifier.

There will now be Regional Finals on the last day of each regular season Pro League split, part of ecosystem enhancements designed to drive deeper engagement amongst both players and fans. These games will be played in the match point format familiar to Apex esports fans from big tournaments like the ALGS Championship and feature the top 20 teams in each regions Pro League. Adding to the already high stakes of the match point format, the winning team on this final day of competition will be guaranteed a spot at the LAN playoffs.

The second-tier Challenger Circuit has also been updated. The winners of each Challenger Circuit event will earn an automatic qualification to either the Split Two Pro League qualifiers or to the Last Chance Qualifier, depending on the timing. 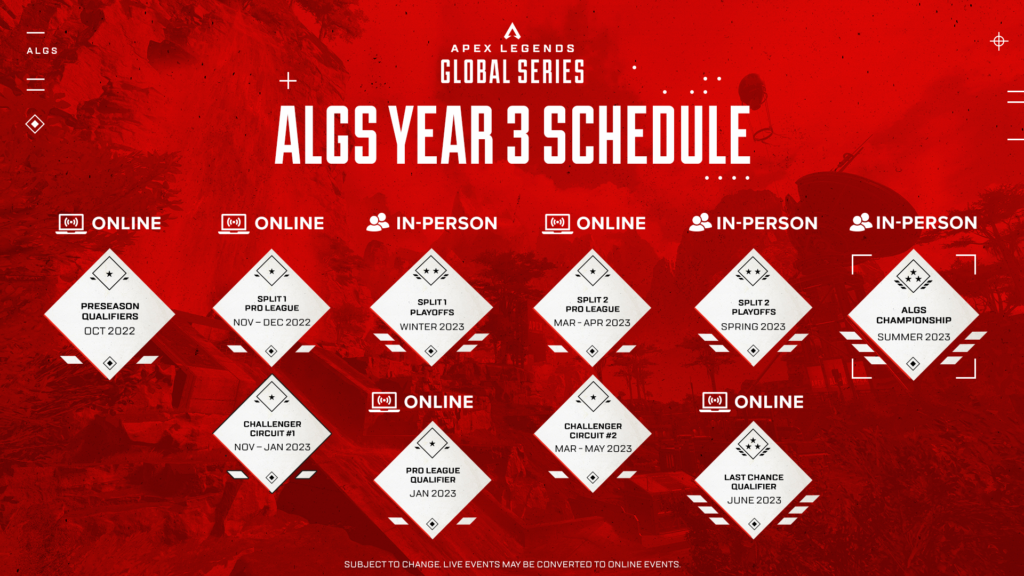 In North America, back-to-back LAN champions DarkZero have officially made the move from APAC South, the teams home region, and will now be competing in the NA Pro League. Theyll join other invited orgs like Tripods, led by NICKMERCS, the meta-defining FURIA, and other Apex mainstays like NRG, TSM, and Optic. The complete list of invited teams by region is available on the ALGS website.

The year three announcement comes after a long offseason for competitive Apex. While the Year Two Championship in Raleigh reached a total watch time of almost 11 million hours across platforms and filled the stands at PNC Arena, showing off the continued growth of Apex esports, the third-party tournament ecosystem has been sparse at times during the offseason, particularly for regions outside of North America. Year three of the ALGS also marks the first time that the total prize pool of the games top competitive circuit will not see an increase: Year two also featured a $5 million pot.

As of today, registration for year three is open. The Pro League is set to begin on Nov. 6.

Latest comments
No comments yet
Why not be the first to comment?
Featured news
Apex Legends13 hours ago