The PlayApex broadcast is getting a facelift.

Ahead of the Apex Legends Global Series split one playoffs this weekend, EA and the ALGS are bringing their new Multiview feature to the official PlayApex Twitch channel. With the feature, viewers will be able to watch the playoffs from any players point of view, switch between different players and teams, and more.

Heres how it works: On the PlayApex Twitch channel, viewers can enjoy the normal broadcast of the ALGS as always. But theyll also be able to use Twitchs Command Center function, which opens up several new viewing possibilities. In the Command Center, viewers can enter a split-screen view that tracks two to four points of view at a time. Viewers will have up to 20 different player POVs to choose from in their own personalized grid, as well as the option of keeping the main broadcast in a window, and a view that displays the current games map. 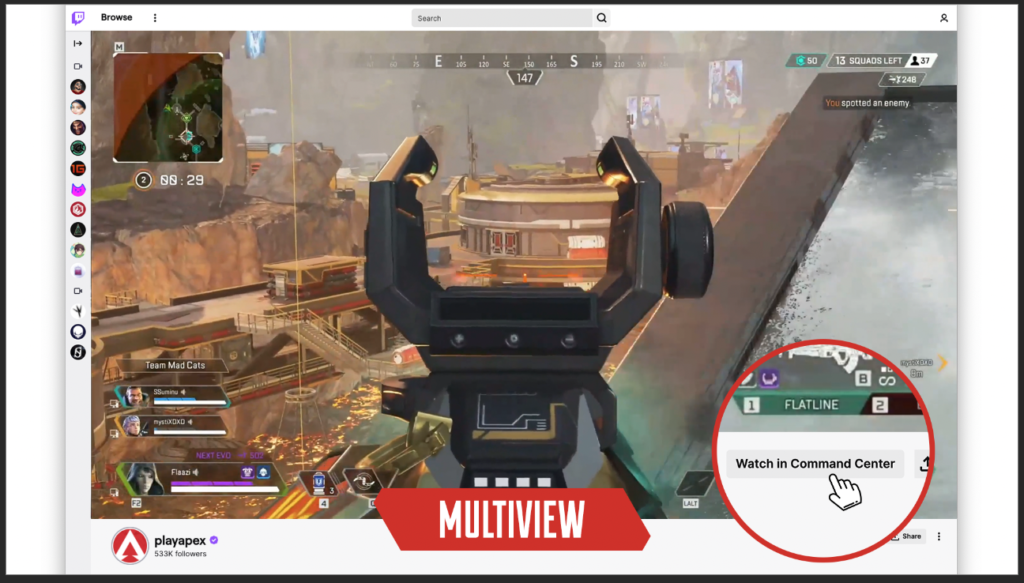 In addition to customizing the viewing experience of watching the ALGS playoffs, viewers will be able to listen in on any teams in-game communications. Instead of simply watching and listening to what the main broadcast delivers to viewers, they can be their own observers and also hear players and teams in the thick of a game.

Battle royales are huge and often difficult to follow. Even if a broadcast follows the action as perfectly as it can, there are so many players and often so many fights occurring in one game that viewers inevitably miss out on some of it from time to time or find it difficult to follow and cheer for their favorite team. The customization Multiview promises is a bit of a game-changer for the ALGS. It seeks to continue to optimize its viewing experience heading into the Pro Leagues second split, the year two championship, and beyond.

Elsewhere, ALGS also announced the return of Twitch drops. Viewers can earn cosmetic items in-game by linking their Twitch account to their EA account, and their EA account is linked to whatever platform the viewer plays Apex on. Viewers who linked their account for Twitch drops in the last ALGS season shouldnt need to take any action to receive these items other than watching the split one playoffs.

The playoffs for Apexs three largest regions kick off this weekend. The APAC North and EMEA regions will duke it out on Saturday, Jan. 22, while North America takes center stage on Sunday, Jan 23. All three regions will compete for separate $125,000 prize pools. And with Multiview, fans can catch all of the action exactly the way they want.