Another WUBRG commander enters the fray.

For Magic: The Gatherings first set of the year, Phyrexia: All Will Be One, players have added incentive to open set and collector booster packs to get their hands on Commander set cards in these packs.

Outside of the two ONE Commander decks releasing with the set, there will be a collection of Commander-legal cards dropping exclusively in set and collector boosters. These cards are not Standard legal and wont be available in Draft products.

One of the cards included is a five-color Myr legendary creature, giving Artifact players a new archetype to build around. Myr are a staple in Artifact lists but now have a Commander thats built around supporting them as a core of your game plan. Urtet, Remnant of Memnarch is a three-mana legendary that has a unique printing quirk that was outlined when the card was revealed by Wizards of the Coast communications director Blake Rasmussen on WeeklyMTG today.

According to Rasmussen, due to a distribution issue, Urtet will show up at two different rarities. The standard version will show up at Mythic Rare in set boosters. The extended frame drops at Rare in collector boosters. This is the only card that will have this discrepancy in rarity in ONE. 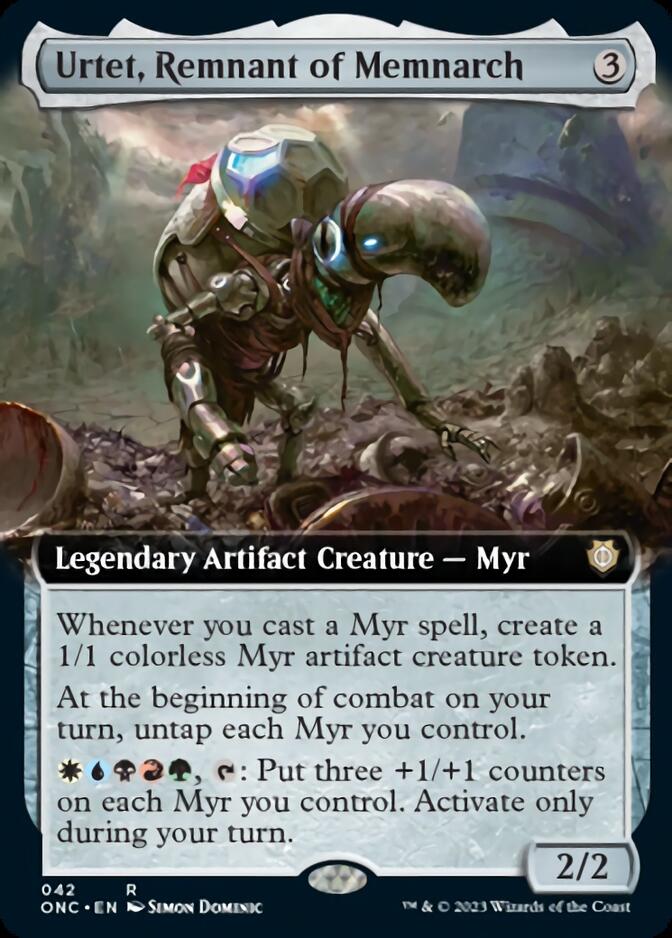 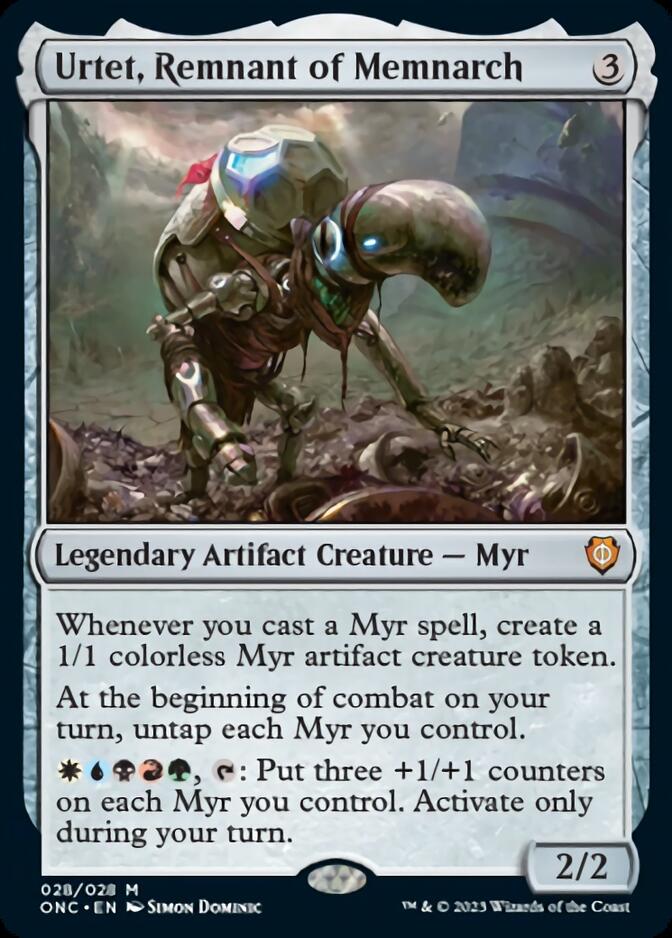 Urtet has just about everything a player could want in a catch-all tribal Commander. While Urtet does have a fragile 2/2 body, it more than makes up for it with its activated and triggered abilities. Myr decks play in a similar way to a standard go-wide Artifact tokens deck, using lords and other spells to grow your army of creatures. Urtet enables this game plan by generating a 1/1 Myr token whenever you cast a Myr spell.

Myr generally have tap abilities. They are great utility spells to generate mana or enable specific combos. Urtet allows you to use these tap abilities on creatures and then untap them at the beginning of combat. This either lets you attack with your tokens or reuse the abilities on your post-combat main phase.

One infinite combo available in an Urtet deck uses Myr Welder imprinting Lithoform Engine to copy the untap trigger on Urtet. This will allow your Myr to repeatedly use mana abilities to generate infinite mana. From there, winning should be pretty simple.

Outside of going infinite and using the established win conditions for Artifact decks, Urtet is also a finisher. The WUBRG activated ability puts three +1/+1 counters on each Myr you control. This is an excellent way to grow your battlefield and threaten lethal attacks early.

You can harness the power of Myr by cracking set and collector boosters when ONE is released on Feb. 10.

Latest comments
No comments yet
Why not be the first to comment?
Featured news
MTG15 hours ago