The LPL Summer Split came to a close earlier today and as the regular season reached the finish line, professional League of Legends in China firmly set its eyes on the playoffs. The LPL will be the first major region in the world to begin its postseason, with only 48 hours between the end of the Summer Split and the beginning of the playoffs.

With 10 teams making it into the playoffs, two parallel brackets of both double and single-elimination formats, and a dozen matches across the entire postseason, the LPLs playoff format is unlike any other in professional League of Legends.

With this unique format in mind, here are the matchups and game dates for the LPLs 2022 Summer Playoffs. 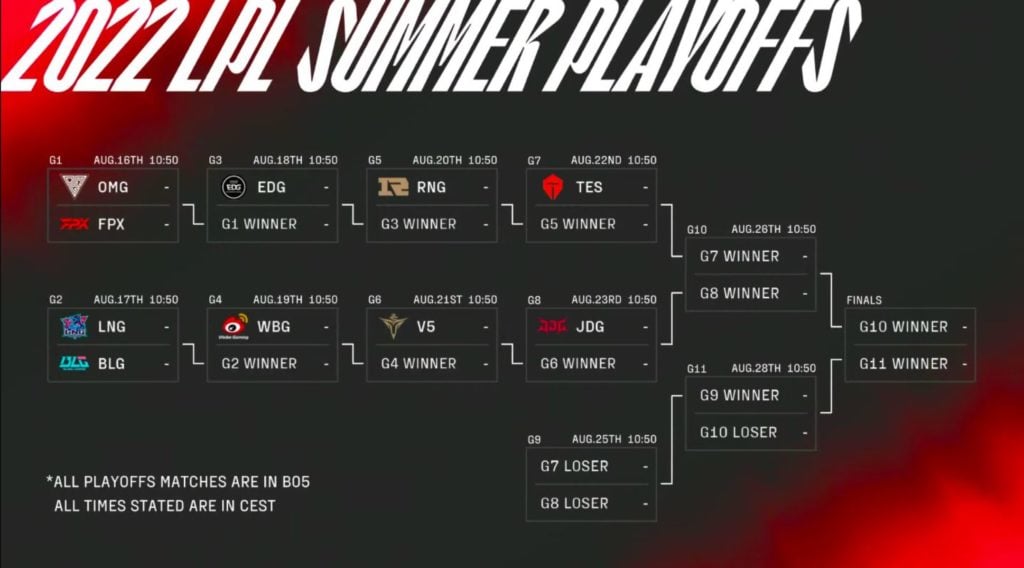 Seeds five through 10 in the LPL will begin the playoffs in a single-elimination bracket that embraces a king of the hill style of elimination, with seeds five and six awaiting the winners of matchups between the lowest four seeds in the second round of the postseason. Once the field has been narrowed down to the top six, double elimination will kick in. The teams that lose in round three will still advance to round four, but will be slotted into the Losers Bracket, where their next loss would spell their elimination.

Following the leagues grueling postseason, the LPL Summer Finals will be played on Sept. 1. The champion of the league will claim Chinas number one seed at this years World Championship. The region as a whole will send four teams to the event, with the top three teams from the playoffs automatically qualifying for the group stage and the fourth place squad earning a ticket to the Play-In stage of Worlds.