The first of the two new legendaries is a 10-cost Elemental minion with Colossal +2, Rush, and Windfury. In addition to the aforementioned keywords, Neptulon the Tidehunter is a 7/7 with an effect that says when he attacks, if you control any Hands, they attack instead. Speaking of hands, Neptulon’s two appendages are Neptulon’s Hand. 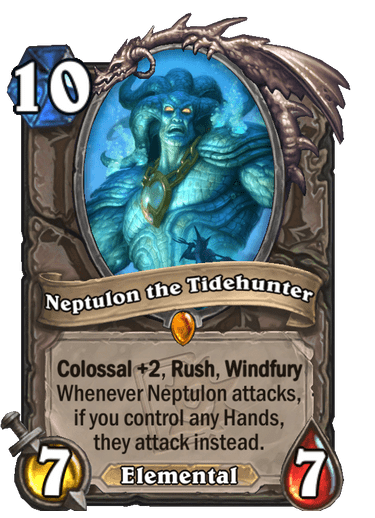 These are four-cost 4/2 Elemental minions that are immune while they’re attacking. That means you’ll likely be using Neptulon’s Hands to slam into the opponent’s minions as soon as he hits the field thanks to his Rush and Windfury keywords.

Neptulon isn’t the only big boy revealed today. He will be joined in Throne of the Tides by another legendary neutral Colossal minion. Ozumat is an eight-cost 6/5 Beast with Colossal +6 and a powerful Deathrattle. For each of Ozumat’s Tentacles, a random enemy minion is destroyed upon his death.

Ozumat will be summoned alongside six appendages called Ozumat’s Tentacle. These tentacles are one-cost 1/3 Beast minions with no special keywords or abilities. It looks like you’ll want as many tentacles on the board as possible when Ozumat bites the dust, that way you maximize the number of enemy minions you get to destroy.

You’ll be able to check out Ozumat, Neptulon, and all of the new cards coming with Throne of the Tides when the mini-set goes live on June 1.

Latest comments
No comments yet
Why not be the first to comment?
Featured news
Hearthstone20 hours ago