Watch out for these cards in the Limited format.

Preview Magic: The Gathering cards began to trickle in during the first day of the Magic 30 event today, showcasing a one-drop and two-drop in Red with Haste.

Most of The Brothers’ War (BRO) spoilers that have dropped so far have featured powerful legendary creatures, Artifacts, and planeswalkers. The first day of previews from Magic 30 showcased another side of Magic, specifically low-cost Mono-Red cards that synergize with aggressive creature and spells matter strategies. 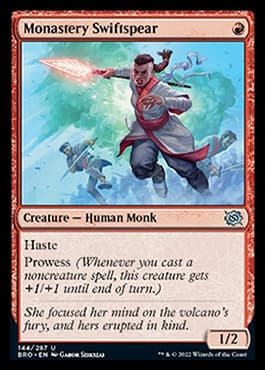 Revealed by Gavin Verhey, Monastery Swiftspear is a reprint from the Kahns of Tarkir set. The human monk synergizes with non-creature spells and will likely be an Uncommon bomb within the UR Limited BRO archetype. Having Haste allows players to pump up Monastery Swiftspear’s stats by casting spells during the mid and late-game stages, giving the one-drop value no matter when it is played in a match. 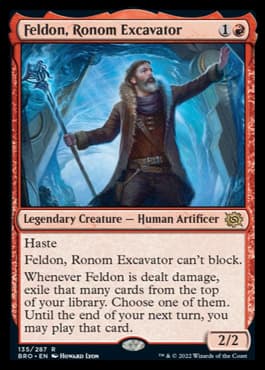 Having a legendary type reduces the possible impact Feldon, Ronom Excavator could have on the Standard Constructed format. But the human artificer is a powerful card within a creature-heavy aggressive build. His ability forces opponents to either take two damage or allow you to gain card advantage, along with possible board state advantage.

Players can test out both Monastery Swiftspear and Feldon, Ronom Excavator with the release of The Brothers’ War on Nov. 18. Prerelease events start on Nov. 11 and a digital launch will take place on Nov. 15.